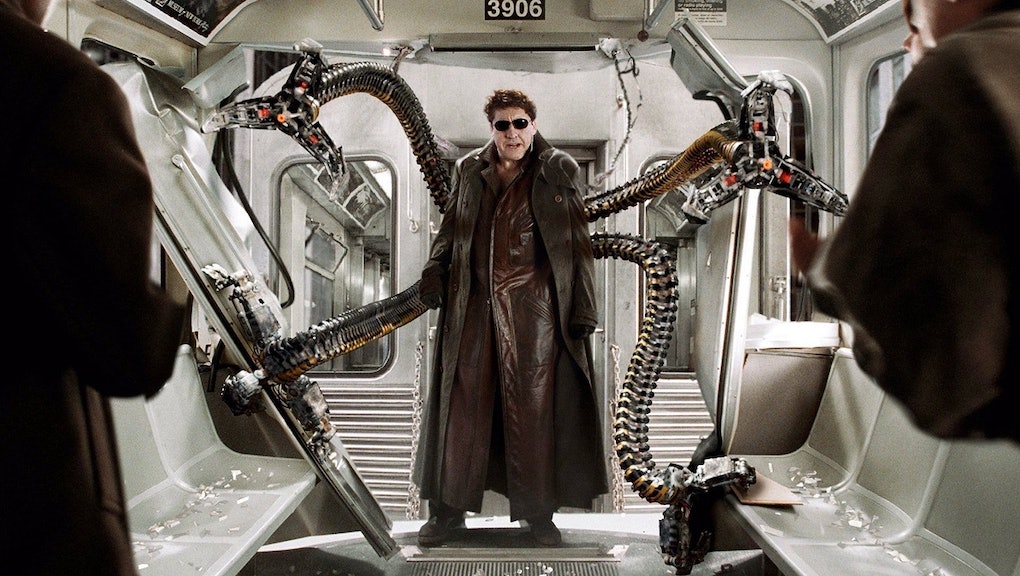 Call it brilliant, or call it lazy, either way Marvel bringing Alfred Molina back for the next Spider-Man movie is a powerful new frontier for fan service. Molina, who starred as Doctor Octopus in 2004’s flawless Spider-Man 2, was reportedly spotted around the new movie’s set last month, but sources confirmed his return to the Hollywood Reporter on Tuesday.

All of the signs suggest Tom Holland’s third film playing as Peter Parker is going to become a multiverse situation. J.K. Simmons appeared during the credits of Spider-Man: Far From Home as J. Jonah Jameson, planting the seed for a crossover. Jamie Foxx has already signed on to reprise his role as Electro from The Amazing Spider-Man 2, and early reports suggest that Kirsten Dunst and Andrew Garfield are in, with Tobey Maguire still in negotiations. And then the original trilogy’s director, Sam Raimi, is set to direct, well, Doctor Strange and the Multiverse of Madness. In any event, I’m not sure about this!

You’ll be hard pressed to find a bigger fan of the Raimi Spider-Man films outside of the Raimimemes Reddit page. He’s the best to ever take a crack at the whole superhero movie thing, the exceedingly oversaturated genre that’s swallowed up the movie business. I want nothing more than to see him get another go at Spider-Man, but something tells me we aren’t quite getting that here.

Even if the old stars simply appear in the movie for a scene apiece, their involvement is the best marketing imaginable for a new Spider-Man film. The coup is in the casting, but you have to worry if the studio that made a bunch of uninspired quip machines alongside some strong blockbusters have it in them to pull this off.

As much as I love Raimi’s discombobulated Spider-Man 3, with its surplus of villains and jazz club dancing, the core fan complaint — this thing is way too overcrowded — seems to be back in play for this new trilogy’s third installment. Maybe that’s the point, but the prospect of a weird, franchise-spanning crossover isn’t the kind of thing I’d entrust the John Hughes-y braintrust behind Holland’s trilogy to execute.

Since Spider-Man: Into the Spider-Verse introduced the masses to the idea of multiple spider-powered beings, there have been two competing fan asks: do the crossover movie, or bring back Tobey and Raimi. This new film appears on track to fulfill both and neither simultaneously. As writer Gita Jackson put it yesterday: it’s hard to figure out why they’d want to remind people of better movies — in this case, Spider-Verse and the Raimis — instead of just staying in their already-established lane. It's probably much simpler than any creative calculations — getting everyone back in one film may not place the power of the sun in the palm of Kevin Feige’s hand, but the box office receipts might come close to rivaling it.