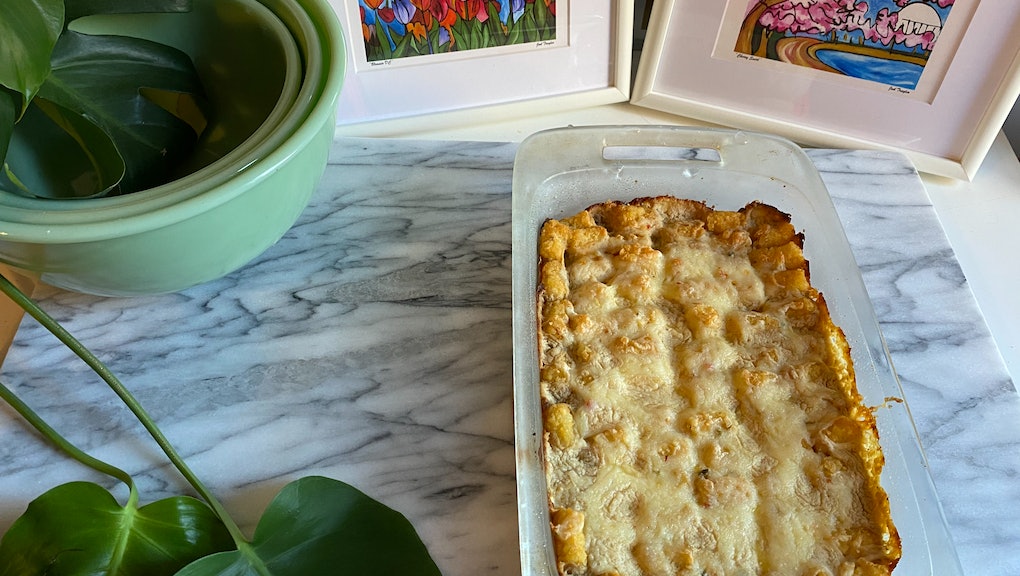 I made Amy Klobuchar’s hotdish recipe

As the Iowa caucus nears, 2020's Democratic candidates are doing their last-minute push for supporters along the campaign trail. Thanks to the impeachment trial, though, candidates who are also members of the Senate are stuck in D.C., leaving surrogates to make the case for Iowans' votes. For Massachusetts Sen. Elizabeth Warren, that includes her dog Bailey. For Minnesota Sen. Amy Klobuchar, it's her daughter Abigail Bessler, who's been hosting hotdish house parties and serving up the casserole-adjacent Minnesota specialty to potential voters.

Earlier this week, The New York Times took a peek inside those parties, parsing the difference between a hotdish and a casserole in terms of the divide candidates often have to bridge with citizens across the country. Hotdish “may be a hard sell outside [Klobuchar's] home state,” the Times wrote. But would it really? I decided I’d make Klobuchar’s hotdish in my tiny New York City studio apartment kitchen to find out.

Despite not being from the Midwest (though I did go to college in Illinois), Klobuchar’s hotdish actually isn’t the first I’ve made. Thanks in part to food blogger and Food Network star Molly Yeh, the concept of hotdish transcended its regional boundaries to reach me on the East Coast. I’ve made the “chicken pot tot hotdish” (basically a chicken pot pie but topped with tater tots instead of pie crust) from Yeh’s cookbook twice.

In true hand-me-down recipe form, there’s no specific definition of what qualifies as 'small' for an onion (or even any guidance on what type of onion you might choose).

In Molly on the Range Yeh defines hotdish (one word, she says) as a subset of casseroles, something you might “bring to a potluck or the house of a friend who just had a baby,” with an equation that basically amounts to a combination of canned soup, vegetables, meat, and starch. What defines a tater tot hotdish like Klobuchar’s is basically, as Yeh puts it, “you cover the bitch with tater tots.”

Klobuchar’s recipe is as bare bones as that equation suggests. The ingredients, all of which I picked up on a post-barre class trip to my grocery store of choice, Fairway, are as follows:

In true hand-me-down recipe form, there’s no specific definition of what qualifies as “small” for an onion (or even any guidance on what type of onion you might choose). It has the same feel as when your mother has narrated her process to you over the phone, her hope that you don't fuck up an old family classic hanging just below her words.

Picking up the ingredients, my mind turns to potential voters in Iowa, whom I presume have at least slightly simpler trips to the grocery store if they’re looking to make this (hot) dish. I wonder if they can find shredded pepper jack cheese in their dairy section, instead of staring at the array so long that surely the man restocking eggs a few feet away worries that something is wrong (which is what I did). I fantasize briefly about large suburban grocery stores and about having a car to transport my groceries home instead of carrying them approximately seven blocks and up three flights of stairs. Then I realize I don’t actually know much about Iowa beyond that there’s corn there and that Hawkeyes football wears black and yellow (go Big Ten). Am I a coastal elite?

As anyone who has ever cooked frozen tater tots knows, the package instructions are, by and large, complete garbage.

When I get home, I focus on the recipe. Like many casseroles, and, I presume, hotdishes, it’s delightfully straightforward. You cook the beef and drain the fat. Sauté the onions and garlic (cut to your own specifications because there are no details on whether you’re chopping or dicing or mincing). Mix those all together with the two cans of soup, salt, and pepper. Spread it out in a 9x13 casserole dish — likely preferably the glass Pyrex passed down from another family member.

This is where I get caught up. Not because I bought my Pyrex baking dish from Bed Bath & Beyond when I first moved to New York, but because the gelatinous mix of beef and soup does not really seem like it’ll fill a 9x13 dish. Did I make a mistake? Should I have made the soup according to Campbell’s package instructions? I begin to worry if, perhaps, my good friend Amy is leading me astray.

I pull out my 7x11 Pyrex instead and hope for the best. The rest of the recipe goes smoothly, other than grating the approximately 11-ounce block of jalapeño jack that I was forced to procure instead of pre-shredded cheese. More than once I stop to stretch and crack my neck in the same way I did during the shoulder exercises in barre class. I worry that bags of shredded cheese will dance in my dreams that night. Grating nightmare aside, I cover the meat mixture in the shredded cheese, and top that with tater tots (thankfully purchased frozen in a bag) and throw that in an oven preheated to 450 degrees for 30 minutes, “or until tater tots are crisp.”

This is when I know that Amy Klobuchar knows what she’s doing. As anyone who has ever cooked frozen tater tots knows, the package instructions are, by and large, complete garbage. I have never in my life come across a tater tot purveyor that gives you a true account of how long it will take to get those suckers crisp. When I check the Ore-Ida bag, it instructs me with times of up to 25 minutes, but generally ranging in the teens, with clear instructions to “not overcook.” But Amy Klobuchar clearly knows that’s trash — her instructions are ones that come from the experience of undercooked, limp tater tots. Of telling Ore-Ida to shove it and patiently adjusting your kitchen timer until you can see a real golden brown on your crunchy potatoes. Something tells me this should give me more faith in her ability to carry out the duties of the office of president, or at least convince me to more fully consider her candidacy. I can't tell if it actually does, though.

I wait the 30 minutes. And as the soups bubble and the tater tots brown, it smells amazing. Unfortunately for impatient chefs, there’s one more step. After pulling my pan out of the oven, I cover it in pepper jack once again and pop it back in the oven “until cheese melts.” Slightly frustrated, I debate if this means the cheese should be bubbly, or if it should brown. Finally I accede to Klobuchar’s recipe and decide the pool of cheese is sufficiently melted, if nothing else, and pull it out of the oven which I then promptly turn off.

Finally, it is time to taste the hotdish.

And ... it’s delicious. Which isn’t surprising, given the ingredient list. But it tastes something like if you casserolized a hamburger. It is what I imagine Hamburger Helper to taste like, sans noodles. (I have never eaten Hamburger Helper. Am I a coastal elite?) It is, of course, a 7x11 distillation of most people’s perceptions of the Midwest: friendly, warm, widely appealing, and generally inoffensive — the type of dish you drop off with a friend who’s going through it because it is a true comfort food, with the added bonus of the fact that any child who would not happily eat this is undoubtedly an alien. I eat the entirety of the mini loaf pan I had filled and baked for an individual serving (maybe I could have filled the 9x13 after all, I speculate).

My coworkers have the same reaction when I serve it to them the next day (allegedly, it even tastes good cold). I can't speak to Iowa voters, or Klobuchar's chances of success as the caucuses and primaries churn on, but hotdish, a hard sell? Hardly.

More like this
Large adult son Andrew Giuliani won't stop talking about cheese for some reason
By Rafi Schwartz
Arkansas's governor is very sorry he engineered a COVID surge in his state
By Rafi Schwartz
Mexico is suing U.S. gun manufacturers over firearms flowing across the border
By Rafi Schwartz
Stay up to date