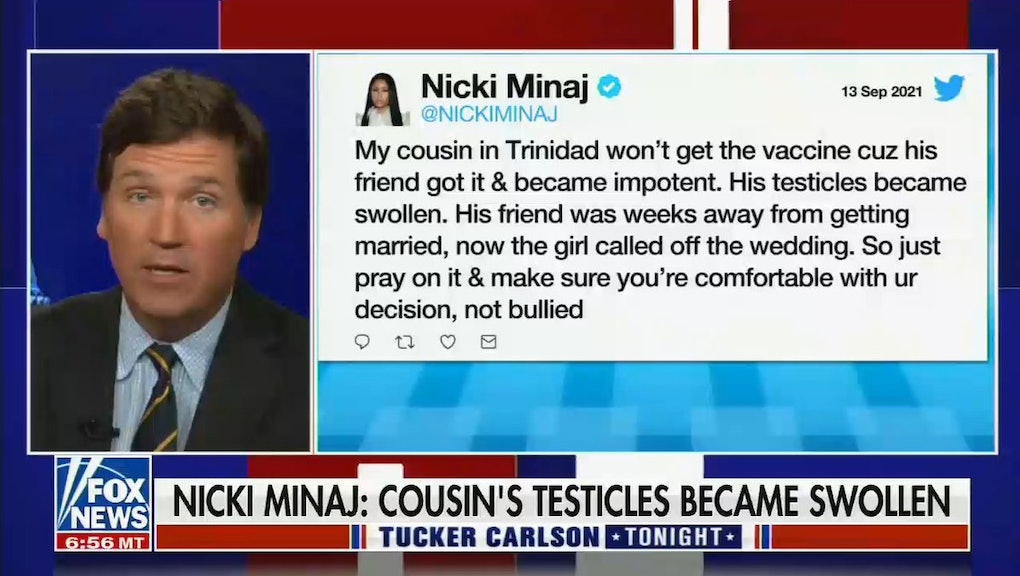 Sometimes, if you're very very patient, and very very lucky, you might experience the rare opiate pleasure of stumbling upon a news story that you never, ever, want to end — a story which, despite the rapid-fire pace of the 24-hour news cycle and our corresponding mayfly-esque attention spans, defies the odds by continuing to deliver with each and every subsequent iteration.

The testicles in question, raised by the megastar rapper in an ill-advised series of (deeply misinformed) anti-COVID vaccine tweets this week, have taken on something of a life of their own, inspiring memes, governmental denials, and — to my unending personal delight — an ongoing segment on Tucker Carlson's eponymous weeknight Fox News show. For as funny as Minaj's insistence that getting a COVID shot blew her cousin's friend's balls up to gargantuan proportions is (and boy is it!), the fact that Carlson has spent multiple programs discussing the alleged instance of huge ball-ism has kicked this whole thing up into my personal comedy hall of fame.

And then, in a moment of deranged inspiration that elevates this whole ... thing ... to something more than just an ephemeral tweet about a guy's big balls, Carlson addressed the allegedly large-testicled man himself, urging Nicki Minaj's cousin's friend to be in touch — presumably so the show can spend yet another night discussing this man's genitals.

Don't get me wrong. I am well aware that a major celebrity spreading obvious bullshit about a random person's humongous balls in an effort to dissuade people from getting a crucial vaccine in the midst of a global pandemic is, objectively, Very Bad™. And yet! The fact that Fox News, and Carlson in particular, is so starved for any sort of anti-vax content that they would treat Nicki Minaj's cousin's friend's balls as a multi-day story is simply wonderful to me. I love it. I hope we get weeks of Carlson very seriously discussing the nature of the swollen balls, and the possible causes and cures for the swollen balls. I want diagrams and scale models and expert interviews. I want the show to transition to all-ball, all the time. Lord knows, for someone as bigoted and destructive as Tucker Carlson is, fixating on a random person's testicles just might be one of the least harmful things he could do.

More like this
Vaccines are good. Threatening to evict someone over them is not
By Rafi Schwartz
Portland cops may have successfully temper-tantrumed their way out of mandatory vaccinations
By Rafi Schwartz
Biden's new office to fight for environmental justice already faces an uphill battle
By AJ Dellinger
Stay up to date