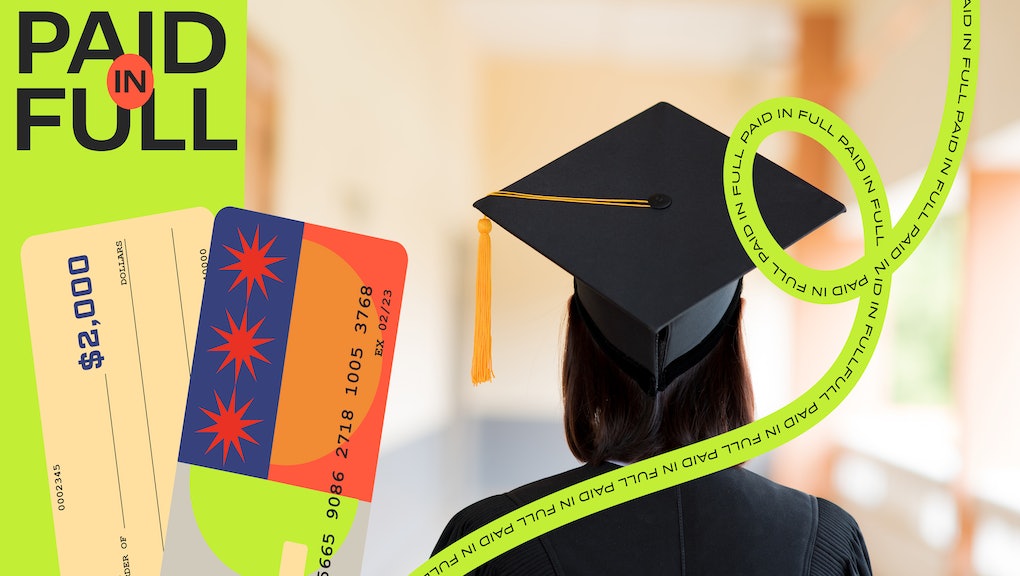 I paid down 50K in student debt. Here's how I pulled it off

For most of us, debt is a necessary evil. Paying it off can be one of the most freeing, empowering accomplishments in the world, worthy of celebration. Mic's new series Paid in Full tells the stories of these triumphs, and just might help you figure out how to get to balance zero, too.

How long it took to pay off: Periodic payments during school, then about seven years. I paid it off at age 30, three years ahead of the original undergrad payment schedules.

Jobs held during while paying off the debt (after graduation):

I was a first gen college student excited to head somewhere new and went to a private, out-of-state university to study math. My family didn't have any money saved for me, so everything that wasn't covered by scholarship was loans. I had nine individual loans, and the highest interest rate was 9.5%. One of the loans for my first year, after the others were maxed, was only $332. We couldn't even afford that out-of-pocket. I applied to three schools and the application fees alone were a strain. If I were to do it over, I'd go to a more affordable state school.

My parents had a lot of debt. We shopped for school clothes at Kmart and my favorite meal for years was canned Dinty Moore beef stew. I remember in 3rd grade my friends were joining cheerleading and I told my parents I wanted to sign up. I overheard them later wondering how they would come up with the money for gear and the next morning I told them I'd changed my mind. I didn't ask for much after that and I got a job at 14 so I could go out, buy my own things, etc. My parents told me how things got out of hand for them so I knew the importance of not using a credit card just because I had it.

It wasn’t really a hard decision, taking on the loans. This was maybe some naivety, but I was just excited to go to college. It was a big deal for my family. While I may not have had financial privilege, I did grow up in a steady home with parents who encouraged me to try hard in school. I got a lot of scholarships which made it seem not as bad, and I was lucky enough that my favorite subject was math, so I was confident I'd get a good job.

I moved home after graduation and worked retail, saving all my money to move out of a rural area with no career prospects. I took a huge leap a year later and moved to a city without a job lined up. It took a few months to get going, but I only had to borrow money once, $300 from my little brother.

I was then able to give the debt my full focus. I don't financially support anyone else and don't have any medical conditions that cost money. I knew the danger of compound interest thanks to my parents, so I worked a few hours a week during college and would put a couple of hundred dollars toward my loans at the end of every semester years before payments were ever due.

About two years after graduation, I was living comfortably enough and stopped paying only minimums. I got around $2,000 a year in tax returns which I put fully toward debt. I automated all my bills and slowly increased the payment on the loan I was targeting, even $10 at a time. I got used to the reduced spending money, increased the payment again, and so on. My loans were spread across three companies, so I first got it down to two by paying off the one with the lowest total balance.

I then switched to paying off the highest interest loans (after refinancing them for lower rates thanks to building my credit score) and worked in order down. When I paid one off, I'd apply that monthly payment to the next loan on my list. When I got a raise or promotion I'd apply that additional monthly money, too. I felt confident in my self control, so I started putting everything I could on my credit card and paying it off each month for the points. Since I was putting most things on credit, I updated a spreadsheet every week with all credit and debit transactions, categorized them, and tracked the net amount. This way, I was never spending money I didn't have.

I became acutely aware of my spending habits. If the money in my checking account started to build up, I'd make an additional principal payment. I started grad school part time so I could switch to a higher paying career path and pay debt down faster. My job paid for most of it but I took out a loan for the remaining $5,000 rather than doing a payment plan with the school because the rate was lower than some of the ones I was still paying, and that way it was deferred. This was easy to pay off once the others were done.

Luckily, I didn't have any unexpected emergencies. I also didn't have any savings the first few years. It was a calculated risk, especially since I had the cheapest health insurance with a ridiculous deductible. My first year out on my own was a struggle. My loan payments were as much as my rent so I ate a lot of ramen and dollar cheeseburgers, but I aimed to live below my means. I didn't get a smartphone until late 2013, and I bought one unlocked so I could get a cheap monthly plan rather than an expensive contract. I drove an old car until a few years ago so my only major payments were for rent and student loans. And I gave up the idea of being a homeowner in my 20s.

I still feel a pang of guilt anytime I spend more than about $30 because it's so different from how I grew up.

The idea I could get to a point where I didn't want to cry every due date was a goal. Know your debt. Write down the balance for every loan. Get the amortization tables and treat the final listed payment date as your debt free date to beat. I made a spreadsheet with a column for each loan and wrote down the principal balances every month. I had it linked to a graph so I could see each line slowly going down; the visual helped. Make a plan and a stretch goal. Put any unexpected cash against your debt before you're tempted to spend it. Treat yourself to something reasonable every time you pay something off and then increase a different payment by that former monthly payment; the idea is to never give yourself a raise once your basic needs are met.

I'm in a good place now. I got an even better job this year and the salary feels like stupid money. I still feel a pang of guilt anytime I spend more than about $30 because it's so different from how I grew up. I realize I carried a lot of anxious fear. I am pro student debt cancellation, not only as an economic stimulus, but also a boon for public health. The amount of stress off my shoulders after my final payment cannot be overstated. When I paid it all off, it kind of felt fake at first — very anticlimactic. I did take a nice vacation later that year that cost more than I may have done otherwise, but I was also celebrating finishing grad school.

I still fill out a spreadsheet for every purchase. If I go more than two weeks without updating it, I get anxious. I like being conscious of every dollar. I put the amount I was paying on loans mostly to savings now, but have allowed myself some increase in quality of life. I try to be generous. I tip at least 20% even for take out, as a few dollars won't make much difference to me but I know it can for someone else because I've been there. I try to donate, treat friends and family, etc. I don't ever want to become out of touch.

We’re looking for people to include in upcoming installments of Paid in Full. If you’ve somehow managed to pay off debt and want to tell us how you did it, email us at paidinfull@mic.com.

More like this
How to file your taxes: A beginner's guide
By Melissa Pandika
8 funding sources for BIPOC entrepreneurs
By Melissa Pandika
Remote work has made things even harder for marginalized employees, says a new study
By Tracey Anne Duncan
Stay up to date