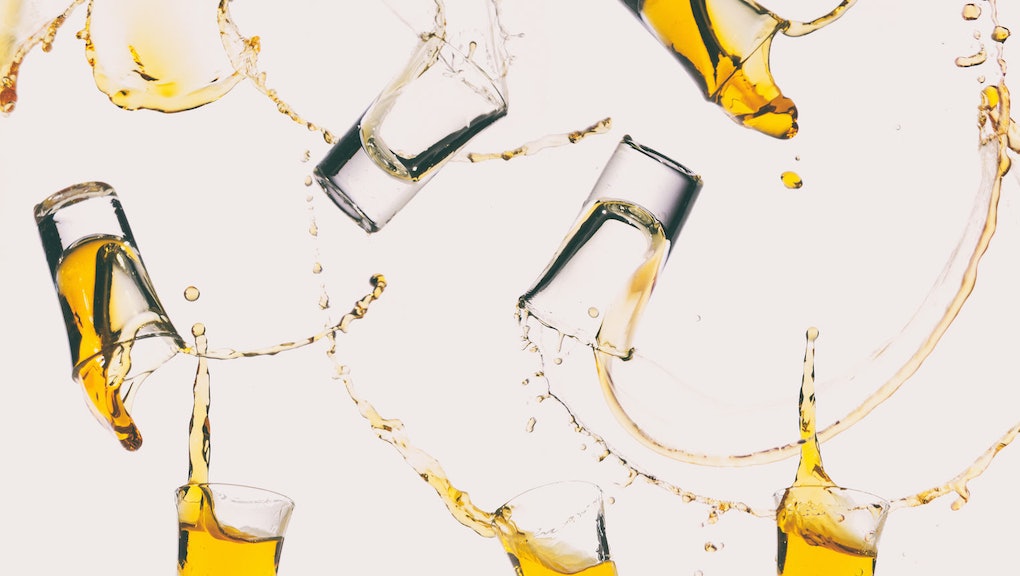 I tried mindful drinking, a more intuitive way to imbibe

I barely drank in college, but in my mid-20s, I jumped on pretty much any opportunity to imbibe. When a social gathering didn’t involve alcohol, I was crestfallen; if it did, I would drink myself into oblivion, or close to it. Sometimes my habit would land me in unsafe situations, like stumbling back to my downtown Los Angeles apartment by myself after midnight. I thought I was letting off steam after the grind of the workweek, like any young professional. I didn’t consider whether I was really self-medicating my anxiety, or avoiding the dreaded realization that the co-dependent relationship that had defined my young adulthood had begun to unravel.

After a few years of therapy plus anti-anxiety medication, I’ve learned to be aware of my limits (and the consequences of exceeding them), and regularly check in with how I’m feeling when and after I drink. In the wake of a binge back in the day, I would vow, in a fit of shame, never to touch alcohol again. Now, I still drink, but in an intentional way that doesn’t leave me feeling like shit. Without realizing it, I’ve been practicing what’s called intuitive drinking, and it has vastly improved my mental health and well-being.

What is intuitive drinking, exactly? The term has emerged only very recently, so there still isn’t an official definition, but it’s basically an offshoot of the hugely popular concept of intuitive eating, a non-diet approach that involves tuning into your body’s hunger and fullness cues. Likewise, intuitive drinking is “having a healthy relationship with alcohol and finding ways to incorporate it into your life that feel good for your body,” says Carolina Guizar, a registered dietitian nutritionist and certified intuitive eating counselor with a private practice in New York City.

You can use the Dietary Guidelines for Americans’ definition of moderate alcohol consumption (up to one drink per day for women, and two per day for men), but intuitive drinking has more to do with checking in with your body, Guizar explains. A healthy relationship with alcohol makes you feel mentally and physically healthy, but what that looks and feels like will vary depending on lifestyle factors, such as whether your job requires you to have meetings over drinks. Alcohol use becomes unhealthy when it no longer enhances your life, which is what it’s supposed to do when used properly, says Timothy Fong, director of the UCLA Addiction Medicine Clinic.

The rationale behind intuitive drinking is that, like intuitive eating, it allows you the freedom to make the choices that are right for you and your body, without shame or judgment, making you less likely to binge. (In the long-run, excessive binge drinking could increase your risk for advanced liver disease.) For instance, after a night of bingeing, someone might swear off drinking the next week. Although they’d be “good” Monday through Thursday, they might start itching for a drink as the week wears on, and binge on Friday and Saturday night, Guizar says. Then, they feel guilty and hungover on Sunday, spurring the vicious circle all over again.

Intuitive drinking also foregoes short-term fasts, like Dry November or Dry January, for a more balanced, sustainable approach. These “sober challenges also set people up for binging, Guizar says. They rationalize going overboard during the holidays, for example, because they plan to go cold turkey in January. “Your body is this casualty in the process,” she says.

But while several studies have found intuitive eating to be associated with increased well-being and lower body mass, research hasn’t looked at intuitive drinking yet, Fong says. While he thinks the word “intuitive” makes the approach seem a little fuzzy and woo, he supports the underlying idea: getting in touch with how the substances you ingest affect your body. “I’m absolutely in favor of connecting feelings and emotions to thoughts, reasoning, and judgment,” he says.

Intuitive drinking isn’t for everyone, though. If you have a family history of breast, liver, colorectal, or other types of cancer that have been correlated with alcohol use, Guizar notes that you might consider consulting with a doctor and limiting your alcohol intake —and if you have a personal history of substance abuse, she recommends not drinking at all. If you have a pattern of experiencing problems after you go out for drinks, such as missing important work meetings, and alcohol use becomes a real problem in your life, Fong suggests talking to a professional, such as a primary care doctor or therapist, rather than going at it alone by practicing intuitive drinking. You could also call the Substance Abuse and Mental Health Association (SAMHSA) helpline.

Otherwise, Guizar recommends intuitive drinking to anyone seeking to develop a healthier relationship with alcohol. Here’s how to practice it:

Observe your current drinking behavior and how it makes you feel mentally and physically. Once you have a baseline reading, start experimenting with your consumption. Say you normally have two drinks when you go out with your friends after work, but this time you have a presentation tomorrow morning. Rather than telling yourself you shouldn’t have more than one drink, ask yourself how it would feel to have one drink. “It comes from a much gentler place,” Guizar says. Also consider what level of consumption feels good on a weekday, versus on a weekend.

Fostering a healthier relationship with alcohol entails understanding your motivations for drinking in the first place, Guizar tells Mic. “Is it purely just pleasure, or is there something underneath that needs to be addressed?” In other words, do you drink your feelings, in the same way you might eat your feelings?

“Knowing is the first battle,” Guizar says. “Then you can make a choice about coping with whatever underlying emotion is there.” If you choose to chase down a stress-filled day with a marg or two, be aware of the reasoning behind that decision and own it, which will make you feel less like you’ve “slipped up,” and stave off the self-loathing — and subsequent bingeing — that can trigger. It’s the difference between planning to get wasted (and communicating as much to your friends to prepare them) versus planning to tap out after three drinks but slamming ten and sleeping until noon the next day, Fong says.

“Is it purely just pleasure, or is there something underneath that needs to be addressed?” In other words, do you drink your feelings, in the same way you might eat your feelings?

Although Guizar notes that emotional drinking is “a perfectly fine coping mechanism,” ask yourself whether it’s your only coping mechanism. For instance, now I realize bingeing was my sole means of stress release, as well as a way to numb out from my toxic relationship and other sources of anxiety. Since expanding my coping strategies (ending said relationship, working on my issues in therapy, and going on anti-anxiety meds) I feel way less compelled to get wasted. I do sip a shot of whiskey or tequila one or two nights a week, but because I enjoy the taste and overall sensory experience, which brings us to our experts’ next recommendation.

Ask yourself whether your drinks still taste good

Guizar has noticed that her clients often keep drinking, even when they can no longer taste or enjoy their beverages anymore. “At what point does it go from tasting good to ‘meh?’” she suggests asking yourself. “Can you lean into the ‘meh,’ get curious around that, and understand what makes it difficult for you to stop when it doesn’t even taste good anymore?”

It goes back to pinpointing why you’re drinking. Will you have FOMO if you stop? Do you want the night to keep going instead of calling it quits? Or are you on autopilot and just not paying attention? If someone offers you another drink, ask yourself what it would feel like to pause for a second and ask yourself if you even want it, especially if you’ve already had a few — again, “not from a place of judgment,” Guizar says. “You’re just observing yourself very neutrally.”

Check in with your body

Ask yourself how your body feels during and after drinking. If you feel dehydrated and basically not great, feel free to explore those signals, Guizar says. Examine how it feels when you drink for days on end. Do you feel ok, or sort of sluggish? Once you’ve clarified your drinking patterns, take a giant step back, and if you notice you’re drinking more than what feels good, reflect on whether it makes sense to experience what’s it’s like to limit or abstain from drinking.

Lately, I’ve noticed that my hangovers feel way worse than they used to. (Hey there, 30s!) And besides making me susceptible to risky behavior, I’ve discovered heavy drinking intensifies my anxiety, which has strained my relationships with loved ones. Keeping all these possible outcomes in mind when I drink makes bingeing far less tempting.

The overall guiding principle of intuitive drinking is curiosity. I’ve learned to ask myself how drinking makes me feel out of a genuine desire to understand myself and body, which ultimately feels more productive and empowering than endlessly beating myself up over my alcohol use.

This article was originally published on Sep. 10, 2019

More like this
The 6 best meditation podcasts that might actually make you want to meditate
By Tracey Anne Duncan
TikTokers are demystifying ADHD with truth and just enough levity
By Joseph Lamour
Will full FDA approval convince the vaccine hesitant?
By Melissa Pandika
Stay up to date