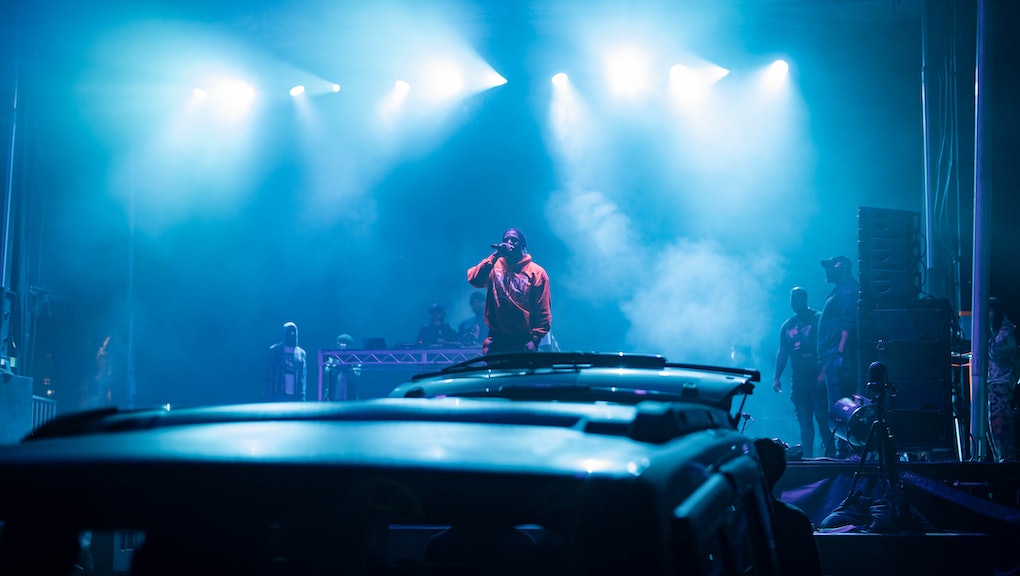 As the coronavirus continues to ravage the United States, distance offers modest protection for our fragile humanity — though no guarantees beyond a fleeting moment. In the parking lot of the Adler Planetarium on a picturesque Friday night in Chicago, our compliance with social distancing guidelines promised brief nautical delight in the form of the rapper Lil Yachty’s first concert of 2020. The performance could very well represent the way things go for some time, as more people hunt for shreds of normalcy in decidedly weird times.

The concept of a socially distanced concert has been marred by the haunting virality of people not giving a fuck. Timelines have flourished with clips of maskless masses teetering the line of superspreader potential. From eager fans scrunched in for DaBaby’s July doubleheader at Headlights Festival, or the pending New York State investigation into the Chainsmokers drive-thru concert in the Hamptons. A select few promoters nationwide have taken on the task of grappling with drive-in shows to fill the desire for summer fun in the safest manner possible, all with mixed results. Lil Yachty’s concert was hosted by the Chicago-based Lakeshore Drive-In and promoters SPKRBX Presents.

In June, Illinois entered phase 3 of its coronavirus lockdown, allowing for gatherings of up to 100 at outdoor venues. Late last month, the parking lot of the Adler Planetarium in Chicago transformed into what promoters are calling the Lakeshore Drive-In, an outdoor drive-in style venue for socially distanced live events. The space isn't unlike the many now-viral photos of well-intentioned safety hacks seen around the world. From socially distanced concerts in the UK to modified raves in Germany. All efforts to carefully keep the party alive.

“People know if they mess up once, then they lose this all,” Adam Weiss, one of the event’s organizers, said on Friday. “Our mission is giving back to the production community, giving people something to do, and giving Chicagoans the chance to enjoy entertainment safely.”

Lakeshore Drive-in allows for up to 200 vehicles, with every other 12-foot-by-8-foot parking space left empty for moderate roaming potential. With my interest piqued, I assembled a group of friends to observe the new normal of live music. We were greeted by the staff for a rundown of the rules. No smoking or drinking outside of your car, no wandering the grounds, place concession and merch orders via phone and someone will bring them. I scanned the lot to see who came through with vehicular advantages. Cars with sunroofs, pickup truck beds, SUVs, minivans, or a VIP car pass at $390 before tax for a party of four’s center-stage guarantee. Masked staffers roamed the grounds in black t-shirts, venue security in hi-vis vests rode bikes and carts throughout the grounds. Plainclothes officers stood by, seemingly bored given the fact that we couldn’t go anywhere other than the bathroom.

DJ Preme, age 20, let the rap show standards bang for the first hour, playing a set that included Carti, Cardi B, Megan Thee Stallion, and the Drake and Lil Durk record that premiered at 11 p.m. the night before. It was easy money, and we were easily pleased; even for the familiar, the heart can grow fonder in its absence. Landlocked to the radius of our lot spot, we basked in the absurdity as sweat beaded our backs in the 2-inch moshpit we forged from nothing. Honking horns subbing in for fanfare as the songs we’ve longed for lent us temporary grace.

Contrary to popular belief, a fit remains a fit in the drive-in, even for an eight-car radius of vision. And a Lil Yachty concert brings in all forms of youthful abandonment — from normies to fashion obsessives and streetwear goons. Familiar concert tactics took hold as well, a testament to human resilience as nightfall turned the lot into loophole central for quiet vices. The young lady sparking a backseat blunt two cars over from me, or the concert friend I made behind our car via eye contact and body movement alone. And the couple canoodling in their open trunk as if the perfect sky was enough to cover for their debauchery. What if we kissed at the Lil Yachty COVID drive-in show?

“Sometimes people have to be reminded many times throughout the night, and sometimes people don’t cooperate,” said an unnamed staffer reflecting on his work experience. “These people are given warnings, and if they continue to disobey, they’re kicked out. Overall, the experience has been refreshing and positive for those working and attending because of the rarity of live music. Most are grateful that this is even happening!”

When the indulgent night grew impatient, the crowd of cars cried violently in the drive-in. After 45 minutes of inactivity, Lil Boat emerged in a red Glory Boyz hoodie and a matching Bulls cap, poppin’ out the COVID cut for the first — and potentially only — show since Lil Boat 3’s release in May. Surely the fans paid premium price for premium energy, the threat of lingering death be damned!

This wasn’t that. Yachty’s otherwise potent showmanship was watered down into laissez-faire performance art, with a transparent air bouncing from humorously humble to blatantly nonchalant. Between forgetting lyrics often and casually, Yachty went out his way to tell us how little of a fuck he gave. “I promise you: when I’m at home, I’m not listening to myself,” he said before admitting he’s more focused on gaming or watching movies in his downtime.

“Any of y’all follow me on TikTok? Not the bayang!”

To play sailor’s advocate: It’s surely the freshest hell to lead a Juice WRLD tribute and play “Yacht Club” in Chicago to a mesh of crowd noise and horn honks. Atlanta-based rapper Draft Day came along to assist with the Lil Boat 3 cut “Demon Time” and gave as much as he could, but I’m sure this wasn’t Yachty’s prime setting to put his homies on, nor was it the ideal proving ground for Yachty to test his newly-acquired hits. Even as he pushed through the show, the stage boundaries clearly stunted the conditions of his youthful chaos. No mosh pits, no crowd-surfing, and no bottle distribution for water fights.

Most are grateful that this is even happening!”

His constriction was most visible during the Tee Grizzley-collab “From the D to the A.” Yachty opened a bottle of water, realized he couldn’t throw it on anyone, took a single sip, dropped the rest onstage, and kept performing. “Y’all don’t know the lyrics, nigga, I don’t either!” he said half-jokingly, before quickly carrying on.

The whole thing concluded promptly, and the bright lot lights tagged our vision as everyone stowed their trash and dashed to beat the caravan line. For three hours, we rejoiced in the privilege of being surrounded; the substitute thrills of festival aesthetics served to mitigate our miseries. No drama, no droplets, and no curfew threat courtesy of our Mayor Lori Lightfoot, granting us clearance as she sealed downtown from the ugly it’ll face no matter which bridge she lifts.

In the end, Yachty’s show was a pricey reprieve from the ugliest summer I’ve seen. And as the music industry scours for ways to bandage itself, without further failing our nation’s public health, the automotive turn-up — when done safely — proves a worthy adversary in the fight for our right to function. God only knows what we’ll do once it finally gets cold like Minnesota.

More like this
These organizers are fighting to make sure non-English speakers get vaccinated, too
By Vanessa Taylor
“Panny,” “panettone,” “panini”: Why silly pandemic nicknames are getting us through it
By Melissa Pandika
Your smaller pandemic friend group is actually a good thing
By Joseph Lamour
Stay up to date