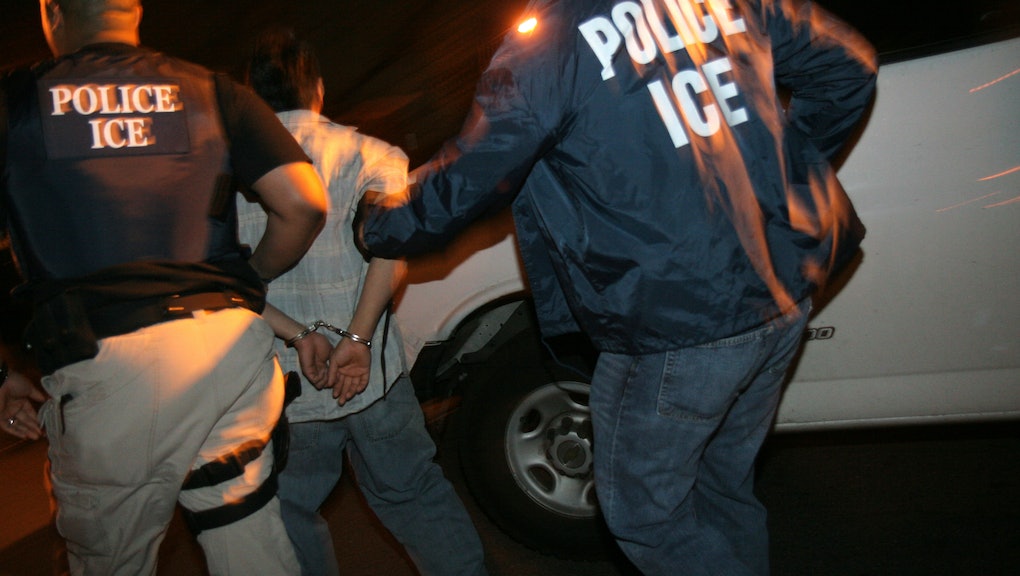 In six weeks spanning July and August, Immigration and Customs Enforcement (ICE) arrested at least 2,000 undocumented immigrants, the agency announced this week. Mass arrests of undocumented immigrants with criminal convictions are not unusual for ICE, which falls under the Department of Homeland Security, but around 15% of those arrested had no criminal convictions. Prior to this summer's arrests, ICE had indicated that it would decrease the number of undocumented people it would detain simply for lacking papers.

At least 85% of those arrested this summer had previously been convicted for crimes including "child abuse, harassment, sexual and aggravated assault, trespassing, weapons violations, robbery, drug charges, and driving while intoxicated," an agency release read. Justifying the nature of the arrests, Tony Pham, the acting director of ICE, said that "by focusing our efforts on perpetrators of crimes against people, we’re able to remove these threats from our communities and prevent future victimization from occurring. Through our targeted enforcement efforts, we are eliminating the threat posed by these criminals, many of whom are repeat offenders."

Many of the arrests were conducted in major cities with large immigrant populations, like New York City, Phoenix, and Los Angeles. Not all undocumented people face immediate deportation as a result of their arrest, but it's likely that individuals without documentation will be forcibly removed from the U.S. at some point in time. It's also unclear what legal representation is afforded to people arrested by ICE, as is their constitutional right. Moreover, people in ICE custody and friends and family on the outside have spoken out about the appalling conditions of ICE detention facilities — at least 5,000 people have fallen ill with COVID-19 infections, and at least six individuals have died.

And mass arrests and the continued presence of ICE does more harm to public health, advocates warn. By placing uninfected people in congregate settings, the agency increases the chance that undocumented people will contract coronavirus, and consequently suffer from both the infection and limited access to medical care. There's also evidence of deporting infected people back to the country they migrated from, which only serves to spread the virus internationally.

According to ABC News, earlier this year Guatemalan Health Minister Hugo Monroy suggested "that a recent spike in cases was because of deportations from the U.S. On one flight, more than 75% of migrants later tested positive. ... If Monroy is correct, it could mean dozens of Guatemala's cases are tied to U.S. deportations." Deporting those with COVID-19 infections instead of treating them could be a human rights violation.

Instead of arresting more people, even for criminal convictions, advocates say that the federal government needs to come up with new ways of holding people accountable for crimes. As the Brennan Center for Justice wrote, "The federal government, in partnership with state and community actors, must create a comprehensive response to minimize the impacts of COVID-19 on those who are at risk of arrest by immigration authorities. The federal government should also dramatically reduce the number of people in immigration detention."

Mass arrests, of course do exactly the opposite.

More like this
New York has set aside a massive, first-of-its-kind fund for undocumented workers
By Rafi Schwartz
Um, Biden's big immigration deal seems pretty similar to Trump's
By AJ Dellinger
Nearly half of Asian Americans have experienced at least one racist incident, per a new survey
By Rafi Schwartz
Stay up to date