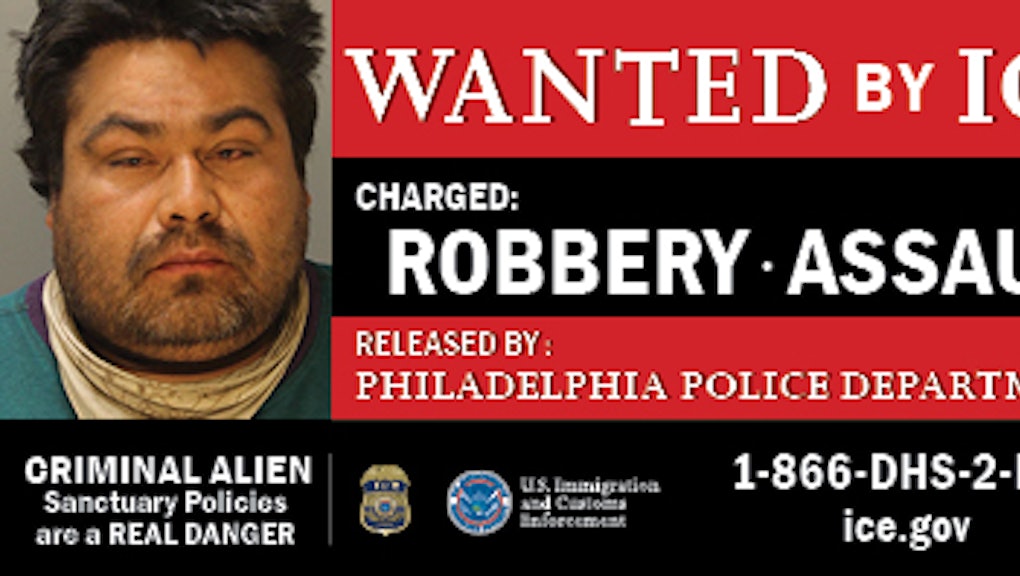 In an unprecedented move, the Immigrations and Customs Enforcement agency has placed wanted signs on six billboards in Pennsylvania in an effort to "educate the public about the dangers of non-cooperation policies." The billboards, which were announced last week, are the latest actions by the Trump administration to vilify immigrants of color and decry sanctuary city policies.

Each billboard displays the mugshot of a different individual, declaring in large letters that the person is "WANTED BY ICE." The billboards list what the person was charged with in local court, like robbery or burglary, refer to the individual as a "criminal," and states that "sanctuary policies are a REAL DANGER." In some cases, the individuals were merely charged with a crime and never convicted.

By "sanctuary policies," ICE is referring to cities that have pledged not to cooperate with federal agents in their efforts to arrest and detain immigrants who do not have the paperwork required by the federal government to live in the U.S. legally. In the near two decades that ICE, which is a subset of the Department of Homeland Security, has operated, the agency has almost certainly never used wanted billboards as a law enforcement tactic, a former ICE official told CBS News. The official added that the strategy was "wildly inappropriate" because it appeared to be a "political advertisement" for President Trump and against Joe Biden, his Democratic opponent.

As BuzzFeed News reported, those who work inside the agency are alarmed at effort to malign undocumented immigrants in a swing state during an election year. An anonymous source who's currently employed by ICE told BuzzFeed News that it seemed "suspiciously political that it’s being done in a swing state. The administration almost seems to regard all of DHS as an arm of the Trump campaign these days." Another claimed that the billboards were the agency's formal appeal to Trump voters, a move the anonymous source found "appalling."

But those higher up in the agency have a different perspective on the anti-immigrant campaign. Tony H. Pham, the interim director of ICE, said in a press release that "too often, sanctuary policies limiting cooperation with ICE result in significant public safety concerns. ICE will continue to enforce immigration laws set forth by Congress through the efforts of the men and women of ICE to remove criminal aliens and making our communities safer."

Amnesty International, the human rights organization, said in a press release that at its core, the billboards are "propaganda." Denise Bell, the researcher for refugee and migrant rights, said in the release, "ICE is an agency that continues to devalue humanity — and fundamental rights — to demonize people based only on where they come from and who they are. It is disgraceful and disgusting."

More like this
New York has set aside a massive, first-of-its-kind fund for undocumented workers
By Rafi Schwartz
With this new bill, North Carolina is again at the forefront of the GOP's anti-trans push
By Rafi Schwartz
Derek Chauvin's former boss, the Minneapolis police chief, just testified against him
By Rafi Schwartz
Stay up to date