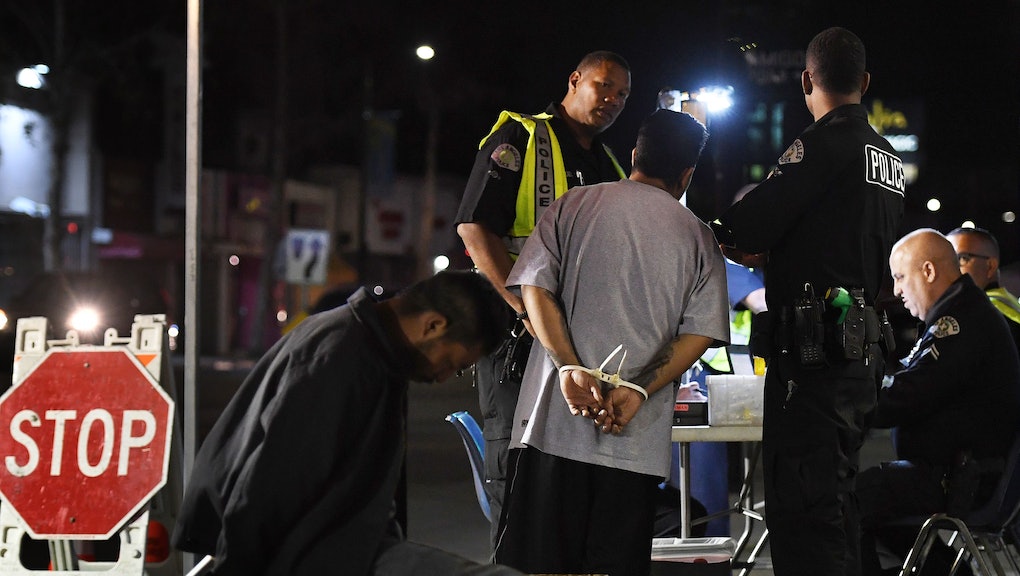 In keeping with the Trump administration's dramatic expansion of anti-immigration tactics, an internal Immigration and Customs Enforcement (ICE) email obtained by The New York Times this week reveals an effort to quash protections offered by sanctuary cities by instituting around the clock surveillance. According to the email, ICE plans to deploy hundreds of plainclothes officers to cities including Boston, New York, Detroit, Chicago, San Francisco, Los Angeles, Atlanta, New Orleans, and Newark, New Jersey — all of which have denounced President Trump’s expansion of ICE efforts, and whose leaders have said that their cities will not cooperate in the campaign to terrorize and deport undocumented immigrants.

The effort, referred to in the email as Operation Palladium, builds on a campaign announced last month known as BORTAC — it is led by the U.S. Border Patrol Tactical Unit — in which specially trained officers dressed in tactical gear descend on sanctuary cities in order to locate, arrest, and deport undocumented immigrants. Nearly a quarter of U.S. counties have pledged not to honor ICE requests, putting them at risk for lawsuits filed by the Department of Justice.

According to the Times, "the latest directive is simple: arrest as many undocumented immigrants as possible." One government official familiar with the program told the newspaper that his boss directed him to “flood the streets.” ICE agents typically do not have arrest warrants or warrants to enter someone's home, given that undocumented immigration is a civil offense rather than a criminal one, so maintaining a presence on the street is their best opportunity to find and detain individuals suspected of living in the U.S. without the proper documentation.

A tweet showing ICE agents patrolling an apartment complex in the Bronx borough of New York, where just over one-third of residents are immigrants, went viral this week. An ICE officer was captured in a photo — taken through an apartment door peephole and tweeted by Times reporter Annie Correal — that showed the agent wielding an automatic weapon. Correal noted that ICE said the officer was acting on a criminal arrest warrant, but that residents of the building said they were not shown any warrant while the officers went door to door.

The Trump administration erroneously believes that undocumented immigrants pose a security and safety threat to American communities. But the American Civil Liberties Union said that expanded ICE efforts such as Operation Palladium actually have the opposite impact from what's intended, often putting the public’s safety at risk.

"It destroys trust between law enforcement and local communities, as people fear that by interacting with police — reporting a crime tip, acting as a witness, seeking protection as a victim — they or their loved ones will end up being taken away by ICE," wrote Naureen Shah, senior advocacy and policy counsel at the ACLU, in a blog post.

A widely reported 2019 study by the American Journal of Public Health found that an increase in arrest campaigns may be linked with worsening mental health outcomes for Latino and Hispanic individuals and communities. And organizations like the National Immigration Project and Mijente, a national digital and grassroots movement for Latinx and Chicanx organizing, warn that the effort to protect undocumented residents from ICE raids is David to the Goliath that is collection, storage, and sale of data by companies like Amazon and Palantir to ICE and the Department of Homeland Security.

"Sanctuary cities have and will struggle to fully protect their immigrant communities, because local law enforcement departments use the same Palantir-created data systems as ICE," read a 2018 report co-authored by the National Immigration Project, the Immigrant Defense Project, and Mijente. "That means that every time local law enforcement uses their systems, they are, in effect, feeding information that ICE can use to conduct raids."

More like this
New York has set aside a massive, first-of-its-kind fund for undocumented workers
By Rafi Schwartz
Um, Biden's big immigration deal seems pretty similar to Trump's
By AJ Dellinger
With this new bill, North Carolina is again at the forefront of the GOP's anti-trans push
By Rafi Schwartz
Stay up to date