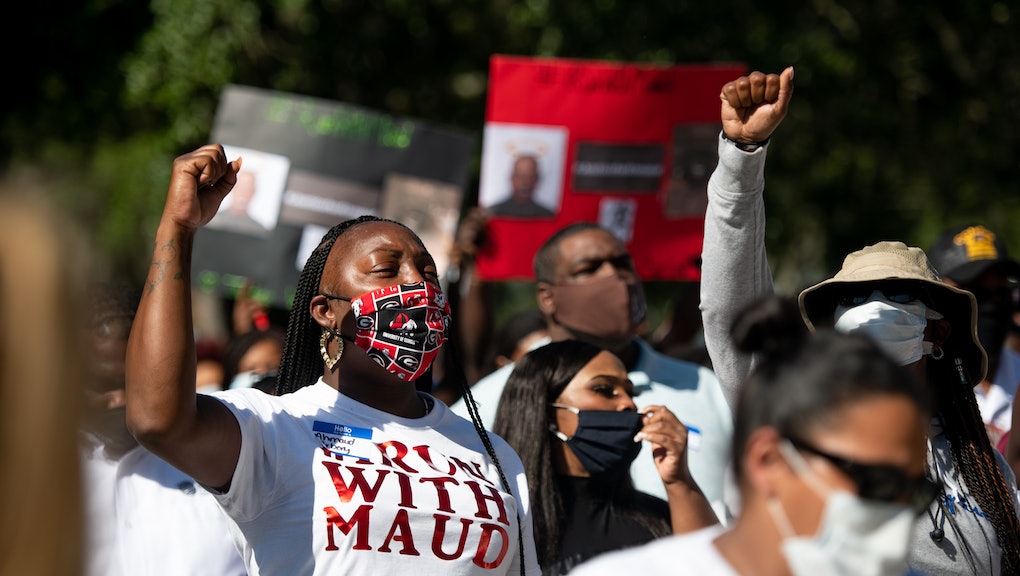 In 2017, Ahmaud Arbery was sitting in his car in a park. Police tried to tase him

Exclusive police video obtained by The Guardian shows that Ahmaud Arbery, the Black man who was shot and killed in Georgia by two white men while out for a run, had previously had a heated encounter with police. Arbery was killed in February, but his death only recently reached national news because video of the incident leaked. One of the men who confronted Arbery in the deadly February encounter had previously worked in county law enforcement, causing some to believe that Arbery's case was buried for political reasons.

The footage obtained by The Guardian shows Arbery being questioned by two Georgia police officers in November 2017. An officer drives up to where Arbery has parked his car in a park, and asks Arbery why he is there. Arbery replies that he works at Blue Beacon Truck Wash and was just spending the morning "rapping in the park," as it's his day off. The officer then asks Arbery for identification and runs his information, but the situation escalates when Arbery begins questioning why he's been pulled over.

The officer, Michael Kanago, responds that he's approached Arbery because that area of the park is "known for drug activity" and calls for backup. Arbery reiterates that he was just sitting in his car relaxing and rapping, and he refuses to let Kanago search his car. While they're talking, the second responding officer arrives and almost immediately attempts to tase Arbery. The device malfunctions, and the second officer then yells at Arbery to lay on the ground, at which point Kanago informs the second officer that he'd already searched Arbery for weapons and found nothing.

Kanago wrote in his report that he called for backup because he felt threatened by Arbery. “Veins were popping from [Arbery’s] chest, which made me feel that he was becoming enraged and may turn physically violent towards me," he wrote.

In the video, Arbery kneels on the grass for about three minutes while he and the officers talk. Arbery says, "I get one day off a week. ... I’m up early in the morning trying to chill. I’m just so aggravated because I work hard, six days a week." Eventually, the officers do not make an arrest and allow Arbery to leave on foot; the second officer says that he can't drive his car away because his driver's license is expired.

Arbery's lawyers believe that the footage demonstrates "a situation where Ahmaud was harassed by Glynn County police officers," according to The Guardian. Arbery was killed in February in Glynn County. "This appears to be just a glimpse into the kind of scrutiny Ahmaud Arbery faced not only by this police department, but ultimately regular citizens like [Gregory and Travis McMichael, the father and son who killed Arbery] and their posse, pretending to be police officers."

The McMichaels confronted Arbery as he jogged through their suburban neighborhood. They say they believed him to be a suspect in a string of robberies in the area. Fearing that he might be armed, the father and son brought multiple weapons with them to confront Arbery in the hopes of detaining him. The younger McMichael shot Arbery twice in the chest.

Months passed without an arrest, until video of the incident leaked and sparked national outcry for action. Civil rights leaders called for a fair trial and independent prosecutor, noting that the first two Glynn County prosecutors assigned to the case had connections to the McMichaels.

On Monday, Vice reported that lawyers for Gregory McMichael say a separate video of Arbery's killing exists, which they say will exonerate their client. Vice notes that the lawyers do not elaborate on what the video shows that has not already been reported, nor did they explain where the new footage came from. The lawyers for Gregory McMichael further indicated that they are pursuing a different defense strategy than the lawyers for his son, Travis McMichael, who actually fired the weapon responsible for killing Arbery.

The newly released video footage from 2017 combine with a recent report from The Atlanta Journal-Constitution illustrates how Arbery, a 5-foot-10-inch Black man, had had a series of tense run-ins with law enforcement. The newspaper describes how in one interaction with Georgia police, Arbery was handcuffed facedown into a concrete sidewalk after telling the arresting officer that he was innocent. In another incident, Arbery was seen carrying a handgun at a high school basketball game; he ran from police but was eventually caught and arrested, where he admitted he'd been carrying the weapon but had ditched it near the school.

More like this
Nearly half of Asian Americans have experienced at least one racist incident, per a new survey
By Rafi Schwartz
Texts from Matt Gaetz's "wingman" allege that the congressman paid for sex with a 17-year-old
By Rafi Schwartz
Ohio police have "run amok" in their dealings with protesters, a federal judge admitted
By Vanessa Taylor
Stay up to date