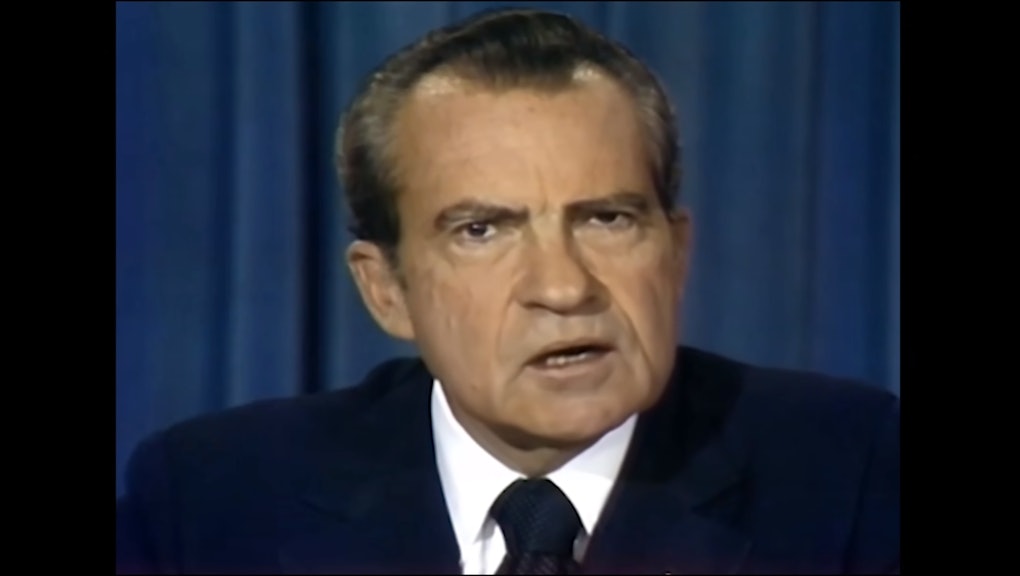 In a chillingly realistic deepfake, Nixon mourns the loss of the Apollo 11 astronauts

Today is the 51st anniversary of Apollo 11, the first space mission that landed astronauts on the moon. The journey was a spectacular feat of technology that effectively ended the Cold War and declared the United States the winner of the ongoing space race. Now, in 2020, a team at M.I.T. has created a "complete deepfake" video that turns that success into failure.

The possibility of a catastrophic event for Neil Armstrong, Buzz Aldrin, and pilot Michael Collins was so great that the U.S. government, helmed by President Nixon, asked speechwriter William Safire to prepare a speech in the event of the astronauts' deaths. The speech, titled 'IN EVENT OF MOON DISASTER,' remains in the U.S. archives as a reminder of what was at stake during the mission.

"Fate has ordained that the men who went to the moon to explore in peace will stay on the moon to rest in peace," stated the opening words.

President Nixon never needed to give this speech, thank goodness, but that didn't stop the M.I.T. Center for Advanced Virtuality from bringing it to life. With a team consisting of artists, journalists, filmmakers, and computer scientists, they have managed to create a surprisingly convincing video that highlights the dangers of misinformation and deepfake technology and how both can be used to created a misleading narrative.

The video is now available on their project website named after Safire's speech, In the Event of Moon Disaster.

"We picked the 'In Event of Moon Disaster' contingency speech for a number of reasons," Francesca Panetta, project co-director and XR Creative Director at the MIT Center for Advanced Virtuality, tells Mic. "First it’s beautiful writing. William Safire was one of Nixon’s speechwriters, and this memo he wrote in case of 'mishaps' is simply poetry (that luckily didn’t need to be recited at the time)."

"Space, on the other hand, isn’t polarizing. Everyone loves the moon! And as it was the 50th anniversary of the moon landing last year, when we started working on this project, it was top-of-mind as a topic that everyone has some familiarity with—a moment in history we felt comfortable playing with, to ask people to question how well they know the truth."

Panetta and co-director Halsey Burgund debuted the project last year at IDFA DocLab. The speech was put together into a six minute video that builds up the moment with real footage of the Apollo 11 launch, featuring audio and video clips of the astronauts, before switching to the fake President Nixon, sitting at his desk, preparing to make his statement.

"These brave men, Neil Armstrong and Edwin Aldrin, know that there is no hope for their recovery," says the false President Nixon. "But they also know that there is hope for mankind in their sacrifice. These two men are laying down their lives in mankind's most noble goal: The search for truth and understanding."

In the video, the camera zooms closer to the president's face, solemn and unnerved by the devastating news he has to deliver. It's not Nixon, but it looks very convincing — there isn't much weirdness going on around the mouth area that one might notice in other deepfakes. The voice is unusually distorted compared to the earlier half of the video, but a passing viewer might brush that aside as a quirk of old recording technology.

To make this deepfake, the team used artificial intelligence (A.I.) that can learn human facial movements by analyzing a database of faces. Then, they used a real video of President Nixon's resignation speech as the base of the video. The creators decided his resignation had the solemn tone and seriousness needed to pull off the Moon Disaster speech.

From there, they filmed an actor making the Moon Disaster speech so the A.I. could map the actor's mouth movements onto President Nixon's face in the resignation video.

The team then went the extra mile to artificially create the president's voice as well. They took hundreds of his Vietnam speeches and fed them to a second A.I., recorded an actor reading the Moon Disaster speech, and then made the A.I. "convert" it into President Nixon's voice.

Once the video and audio were synced up, they were able to create their fake Nixon. Adding additional, real clips of the astronauts gave the M.I.T. video a false sense of legitimacy, which the team also purposely used to show as an example of how real history can be used to create a false narrative. And people are getting better and better at it.

"It's our hope that this project will encourage the public to understand that manipulated media plays a significant role in our media landscape," explained co-director Burgund in a press release, "and that with further understanding and diligence we can all reduce the likelihood of being unduly influenced by it."

More like this
Space debris from a rocket launch is currently hurtling toward Earth
By AJ Dellinger
The ethics of solar power are more complicated than you think
By Vanessa Taylor
He made a cryptocurrency called SCAM. Now he's trying to make it legit
By AJ Dellinger
Stay up to date