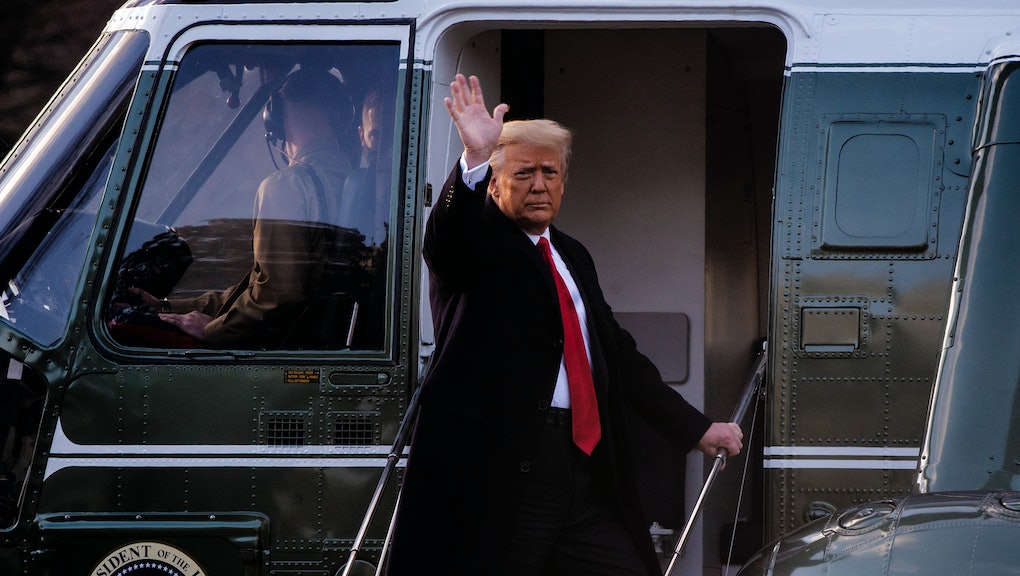 In a lame move, Facebook is passing off the final call on banning Trump forever

Following the storming of the Capitol on Jan. 6 instigated by former President Donald Trump, Facebook took the unprecedented step of temporarily suspending the then-sitting president's account until after Joe Biden's inauguration. Now that Biden is in office, Facebook is faced with the decision to either keep Trump banned for good or reinstate his account. The company made it clear Thursday that it would rather literally anyone else make that call.

In a blog post, Nick Clegg, Facebook's vice president of global affairs and communications, announced that the social network would refer its decision to suspend Trump to its independent Oversight Board. The Oversight Board, which Facebook has touted as its "Supreme Court" in charge of making the ultimate ruling on issues of speech and content moderation, has accepted the case and will review Facebook's decision to suspend Trump. The board, which is made up of 20 members, will seek public comments and investigate Facebook's decision-making process before issuing a ruling. Trump cannot have access to his account restored unless the Oversight Board gives approval, and Facebook cannot ignore the board's decision, meaning the final call rests entirely on the shoulders of this autonomous panel.

That seems to be exactly how Facebook would like it. The company defended its decision to suspend Trump, stating, "We believe our decision was necessary and right." But, as Facebook sought applause and pats on the head for making the brave decision that advocates were calling on it to make forever ago, the company simultaneously threw its hands up when it comes to taking any future responsibility for what happens with Trump. "The Board was established last year to make the final call on some of the most difficult content decisions Facebook makes. It is an independent body and its decisions are binding — they can't be overruled by CEO Mark Zuckerberg or anyone else at Facebook," Clegg wrote in a blog post.

Likewise, Facebook appeared to lament the fact that it has to make such a decision at all. "Every day, Facebook makes decisions about whether content is harmful, and these decisions are made according to Community Standards we have developed over many years," Clegg wrote. "It would be better if these decisions were made according to frameworks agreed by democratically accountable lawmakers. But in the absence of such laws, there are decisions that we cannot duck." That's right, the company that has built a massive lobbying arm and fought tooth and nail against just about every regulation that would remotely infringe on its money-making apparatus is simply begging lawmakers to help them out.

The Real Facebook Oversight Committee — a group of academics, researchers, and civil rights leaders organized by U.K.-based nonprofit All the Citizens — was unimpressed with Facebook's handling of the Trump suspension, and equally underwhelmed by the move to hand off the final decision to the Oversight Board. "Facebook failed for months to take action over Donald Trump’s repeated use of its platform to incite violence, spread disinformation, and systematic attempts to subvert the election," a spokesperson for The Real Facebook Oversight Committee said in a statement. "American democracy survived in spite of Facebook."

"They are absolutely trying to wash their hands of responsibility."

The group said that Facebook has yet to acknowledge its role in enabling Trump and the Capitol riot, and noted that the company didn't take action until it was clear that Democrats would be in control of all three branches of the federal government. "We are concerned that Facebook is using its Oversight Board as a figleaf to cover its lack of open, transparent, coherent moderation policies, its continued failure to act against inciters of hate and violence and the tsunami of mis- and disinformation that continues to flood its platform," the spokesperson said.

Mic asked The Real Facebook Oversight Committee about Facebook's apparent attempts to play hot potato with the Trump ban, throwing the decision over to the independent board and calling on the government to step in to create rules that may help dictate these decisions in the future. "They are absolutely trying to wash their hands of responsibility," a spokesperson for the group tells Mic. "Nick Clegg and [Zuckerberg] are making excuses, saying they need regulation to cover their own failures. It's a way of passing the buck, throwing their hands up, and deflecting responsibility for keeping hate, misinformation, and extremism off their own platform. Regulation won't change their algorithm, and it won't stop rewarding violent content on their platform."

Even Facebook's own employees seem to be confused by the role of the Oversight Board. "Why didn't we have the Oversight Board involved before the decision?" one employee asked, per a report from BuzzFeed News. Others were glad the independent board was involved but didn't understand why it wasn't tapped for input in the first place.

The Oversight Board has not made any indication as to how long it will take to review Trump's case, or when a final decision will be made as to whether the disgraced former president will be able to return to shitposting on Facebook in the near future. But as it litigates, Facebook can already breathe a sigh of relief. The company managed to turn oversight into a loophole for actual accountability.