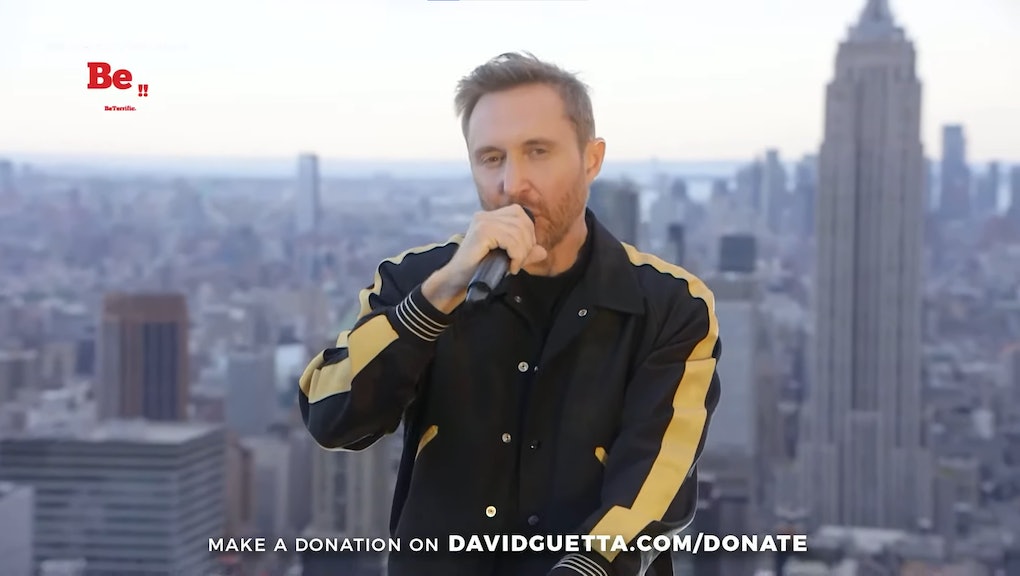 Nine months into this thing, and the makeshift solutions designed to get us through the lumbering, fraught early days of the pandemic are still here, and no closer to feeling adequate. Zoom calls are a reliably stilted, glitchy replacement for being in the same room as another person. Life-sized screens that pass for a studio audience, quadrupling the width of a human face, remain uncanny. Virtual concerts pose no risk to supplanting the real thing.

While none of these are the first thing I notice whenever David Guetta’s hilarious, ghastly tribute to George Floyd enters my feed for the umpteenth time — they’re necessary context to why it remains unlike anything I’ve ever seen. For the uninitiated: back in May, the weekend after Floyd was killed by Minneapolis police and sparked a summer of righteous worldwide protests against racial injustice, Guetta, the wildly successful French DJ and producer behind the Black Eyed Peas' "I Gotta Feeling," took the stage for United at Home, a virtual COVID-relief fundraiser.

There he was, with the New York City skyline at his back, a bevy of fans on gigantic screens in front of him, and a ticker in the upper-right hand corner of our own screen, tracking the money raised thus far. After a few indistinguishable EDM tracks to open the set, Guetta seized the mic to address the tragic subtext to anything that happened that week, over a simmering instrumental:

“The world is going through difficult times. And America, too, actually. So, last night, I knew we were gonna do this, and I made a special record. So this record is in honor of George Floyd. And I really hope we can see more unity and more peace when already things are so difficult. So... shoutout to his family.”

The songs blend together in that amorphous carnival of vibes, until Martin Luther King, Jr.’s voice enters the track, reciting part of his “I Have a Dream” speech. After the beat drops, Guetta pumps his fist along with a smile, as his at-home audience rides with it. During the most viral segment, French soccer legend Robert Pires and his wife, the model Jessica Pires, sway along, with the latter seemingly mouthing along to King’s words. Whether it was a technical glitch or some act of god, the donation tally suddenly plunges to $13,000 during the “I Have a Dream” flip.

Clumsily blending gravitas and escapism in the only way Guetta knows, this was the closest analog 2020 could offer to sitting in a movie theater, with the sound from another, far dumber movie bleeding in from the next auditorium over. So many moments this year actualized the oblivious celebrity antics of Andy Samberg’s Popstar: Never Stop Never Stopping — such as Gal Gadot and friends' tuneless, cringe powerhouse of an "Imagine" cover, one week into quarantine — but this was the most ostentatious and faithful to the text. The initial reactions were as unsparing as a Conner4Real album review — “tone deaf,” “the whitest way to react to racism,” “crime.”

With some distance, Guetta’s take on “I Have a Dream” is an even funnier document in retrospect, especially when compared to other grandiose, self-serious celebrity reckonings with racism like the PSA “I Take Responsibility.” The exceedingly French accent is doing its share of the heavy lifting, and it’s certainly hard to imagine a version of this clip from an American DJ hitting the same grace notes. Most prominently, there's the "shoutout to his family," which is offensively glib, something more fit for the club than a wake. But I keep getting replay value from "and America, too, actually," which unintentionally reduces the year of distinctly American trauma to an afterthought.

Being French certainly doesn’t exempt your obliviousness to American racism, but Guetta is nothing if not overwhelmingly earnest, and frankly too dumb and rich to risk anything resembling cancellation for this. The story hasn’t changed much since a similar 2015 controversy, when Vice deduced that “David Guetta's Native American Fiasco Doesn't Make Him a Bigot — Just a Buffoon.” In the weeks following his tribute to Floyd, Guetta posted the black square, attended a Black Lives Matter protest with his ex-wife and kids, and soon thereafter let the summer vibes resume.

Although he’s no revolutionary, Guetta’s career arc comes with a streak of rebellion. Guetta hailed from a family of respected intellectuals — his half-brother Bernard wound up a renowned French journalist and member of European Parliament, his father Pierre a sociologist. Before becoming a full-time DJ, Guetta was a nightlife maven of sorts in Paris, opening a pair of restaurants and a burlesque bar. During a 2017 Financial Times profile, Guetta talks about his communist mother, Monique, and how they clashed over lifestyle differences:

“My mum thought that everything I was doing was very stupid,” he says. “She was a communist so she felt like all this superficial life and chasing materialistic dreams were a waste of my time... We would fight like crazy when I was young. I was like, ‘I’m going to be rebellious, I’m going to make money.’  That was me being a rebel to my parents. Isn’t that funny? My mum was almost disgusted that I was so business-oriented.”

So... shoutout to his family. The life of hedonistic immortality is basically inseparable from being an apolitical pop star. One requires no moral compass for party rocking, and Guetta has admittedly never been into the whole politics game. He isn’t alone in this arena, but the difference is you tend to notice the face plants more during periods of mass upheaval and suffering. No one’s ever expected Guetta to improve society in an appreciable way beyond writing loud, world-beating electro-pop, so any efforts to stretch beyond the comfort zone could only be channeled through the same context.

Throughout the pandemic, there’s been a persistent narrative that celebrity as we know it is done for. It’s never struck me as a convincing argument, when something like the Guetta video can make its way around the internet again every few weeks. Whether it’s the “Imagine” video, Guetta’s infamous performance, or even Hilaria Baldwin’s Spanish identity crisis, there’s arguably never been a time of more rapturous interest in celebrities — they just aren’t widely seen as credible moral arbiters anymore. The stars are still here to entertain, to confound, and to move us, especially if they’re flying off the rails.