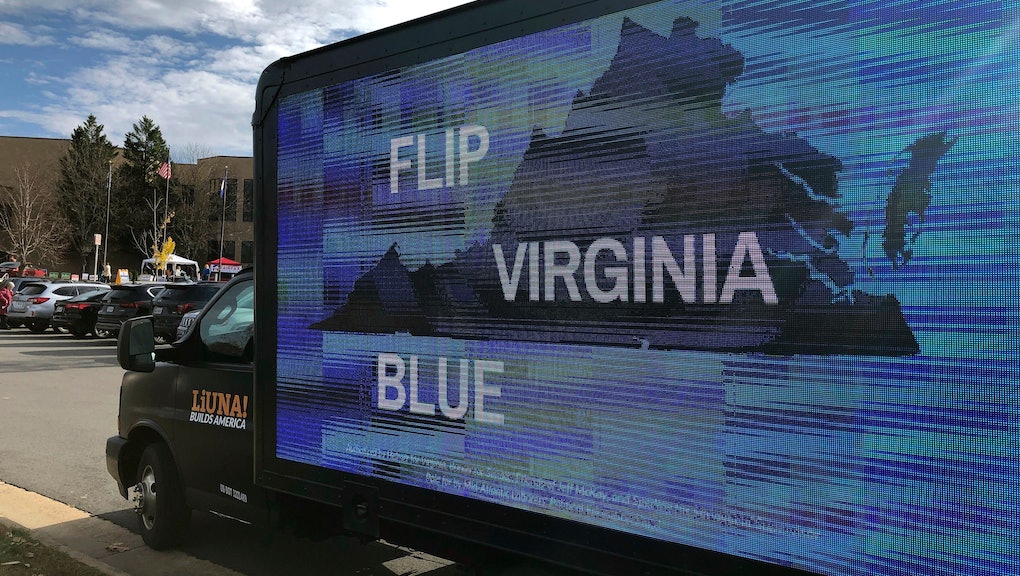 In local elections, there's more at stake than you think

On Tuesday, voters around the country hit the polls in local elections with national implications. Kentucky and Mississippi are holding surprisingly competitive gubernatorial contests, giving Democrats rare chances to pick up a high-profile win in deep-red states. Meanwhile, four states are holding legislative contests, but in Virginia, control of the entire legislature is at stake. There, Democrats have a shot at winning a trifecta of state offices: They currently hold the governor’s office, while Republicans have slim majorities of 20 to 19 in the state Senate and 51 to 48 in the House of Delegates. “Republican majorities in statehouses have been with us every step of the way,” said Vice President Mike Pence at a rally in the state Tuesday, according to the Richmond Times-Dispatch.

The elections Tuesday are being held up as an indicator of President Trump’s support nationwide. As some of the last major bellwether contests before the 2020 presidential election, these local contests provide a window into how major events like the impeachment inquiry have affected his popularity. Trump recently held rallies in Kentucky and Mississippi, where he hoped to boost the incumbent Republican governors fighting for their survival. Considering that both states are hardcore Republican strongholds, a win for the Democratic candidate in either state would send a clear message that Trump is a drain on the party’s standing; in recent polls, both races were within the margin of error. In Virginia, Democrats successfully attaining the trifecta would confirm the state’s gradual move leftward.

These elections are about far more than testing the waters and reading the 2020 tea leaves, however. Though statewide contests in off-year races don’t command the same partisan lightning rod attention as the elections every four years, they still hold plenty of significance as far as what’s at stake in the life of an actual voter. In Virginia, a Democratic trifecta would finally give the party the strength to enact years of reforms that have been held up while Republicans controlled the statehouse, like a $15 minimum wage. In practice, a Democratic sweep Tuesday has real potential to transform the state into a leader on progressive policy — quite the development in what used to be a Deep South state.

In particular, gun violence has emerged as a leading cause in Virginia, after a mass shooting in Virginia Beach earlier this year killed 12 people. Demanding answers, Democratic Gov. Ralph Northam called a special legislative session to address gun violence — only for Republicans to end the session 90 minutes later. Many Democrats running for office in the legislature have campaigned against the influence of the NRA, which is headquartered in the state. To win office in Virginia on the strength of an anti-NRA campaign would be a real signal of the organization’s waning political influence.

If Democrats win out in Old Dominion, they are also poised to introduce seminal legislation on everything from raising the minimum wage to lowering drug prices and protecting people with pre-existing health conditions. There is also the looming specter of redistricting around the 2020 Census — whoever controls the statehouse will have control over drawing districts next year. Previous Republican-drawn maps in Virginia were thrown out in court for being racially gerrymandered. Control of the statehouse means controlling the fate of state voters, including determining how much their vote really counts.

There’s another fascinating wrinkle in what is ostensibly a local fight. Virginia could potentially become the deciding vote to ratify the Equal Rights Amendment, a constitutional amendment guaranteeing equal rights for men and women that was first introduced in 1923, if enough Democrats win their way into the statehouse. The amendment has been ratified by 37 states since 1975, but a 38th has long been elusive. If Virginia voted to ratify, it would give the amendment the two-thirds majority needed to become part of the Constitution. It’s a bit more complicated than that — due to a 1982 law setting a five-year statute of limitations on constitutional ratifications, the ERA would likely end up in court — but regardless, it’s an example of the kind of national ripple effect that statewide elections can have.

Of course, local elections are often about local issues, the kinds of things that constituents deal with on a day-to-day basis that don’t attract the same harsh glare of the partisan national politics. Just ask Danica Roem, who rose to national prominence when she was elected to the Virginia House of Delegates in 2017, becoming the first transgender person ever to win a statewide seat in America. In this year’s campaign, she’s running on an issue that’s far from identity politics or Trump: reducing traffic on a major commuter artery in Northern Virginia.

“Fixing this road is the most important part of my legislative agenda,” she told The New York Times. “When you understand the historic nature of my candidacy and my incumbency, you know that’s a hell of a statement to make.”

Roem’s emphasis on helping her constituents with their commutes is an example of the kind of bread-and-butter issues that can rise to the forefront in off-year statewide elections. Yes, in a local race, it matters whether the road that takes neighborhood workers to their jobs is sufficiently drivable. But don’t lose the potential for the potholes.

More like this
Large adult son Andrew Giuliani won't stop talking about cheese for some reason
By Rafi Schwartz
CPAC may be over, but its horrors will haunt us forever
By Rafi Schwartz
Texas official got skewered for calling Simone Biles a "national embarrassment" and now he's sorry
By Rafi Schwartz
Stay up to date