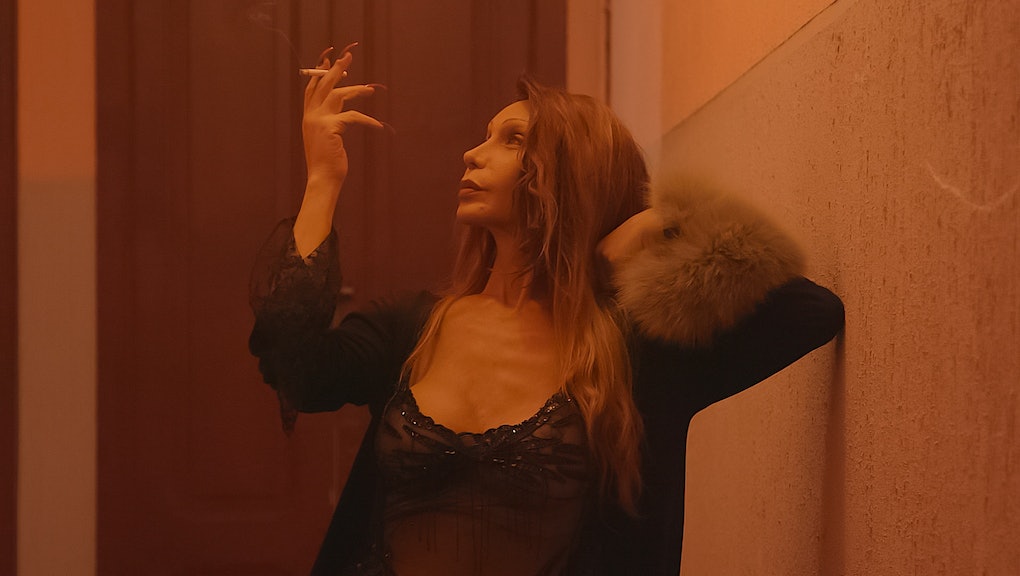 In 'Queen of Lapa,' Rio de Janeiro's trans sex workers are honored instead of fetishized

There’s a breezy, beige-toned cafe in Northern California that, in 2012, was frequented by a middle-aged transgender woman. I know that because I would look for her every time I was there, mooching complimentary bread and purportedly doing my math homework. I was in high school and had just come out as gay. It would be another three years until I’d step out of a different closet.

The woman would come and go in dark brown skirts and turquoise windbreakers I swear my mother owned, sometimes in a rush and other times stopping and paging through a magazine. For me, her life was contagious — the more I watched her putter around with a sensible lip color on and women’s-size-14 flats, the more I wanted to be living that way, too.

Carolina Monnerat, co-director of the award-winning Queen of Lapa, a documentary about the lives of trans sex workers, also grew up with trans women quilted into her youth — except she was in Brazil, not a bourgeois county outside of San Francisco. Monnerat was raised adjacent to the Lapa neighborhood of Rio, an area that many self-described travesti, or transvestite, sex workers called home.

In 2012, Monnerat and her husband, Theodore Collatos — both now living in New York — were in Brazil working on a street photography project when they heard through the grapevine about Luana Muniz, a legendary trans activist, matriarch, performer, and sex worker who “owns” the neighborhood’s streets. Muniz would soon have a significant role in their film, which Collatos co-directed, and their lives.

“She’s an incredible person: philosophical and funny, harsh and loving. Just like, so much,” Collatos tells Mic. The duo knew they wanted to work on a project with her the moment they heard about her — but it wasn’t until visiting the hostel she founded for other travesti sex workers that the couple knew they needed to help tell her story in the film.

“It wasn’t like we had an agenda to do this thing,” Collatos says. The film’s impetus came from simply hanging out with Muniz in her space. “We told her, ‘we want to do a documentary on this hostel experience and show people that everybody is the same,’” says Monnerat. “We all fall in love. We all get heartbroken. We all don’t know what we’re going to eat for dinner.”

The film’s depiction of the women’s daily realities is what makes Queen of Lapa refreshing. Usually, American media examines the lives of marginalized trans women only after they’ve faced deadly violence. According to research from feminist scholars C. Riley Snorton and Jin Haritaworn, the lives themselves are not even being considered when they are represented in these circumstances. Rather, the murdered girls are made into “raw material” to service cultural production and political interests. Bucking this trend, La Lapa, above all, is about humanity worthy of examination outside of tragedy — even when tragedy is, in some cases, baked in.

Pose, a trailblazing FX series about the New York City ballroom scene in the 1980s (which was mostly sex-working Black and Brown queer and trans people), gave trans women of color an unprecedented — albeit fictional — platform as multi-dimensional protagonists. Adding to that, the darlings of the show — two Black trans women and one Black non-binary person who are involved in the contemporary ball scene — are the subject of public engagement. But at the same time, the interest in their lives was made conditional on their celebrity.

In contrast, Queen of Lapa brings real-life travesti women to life for viewers. Almost entirely set in the space of the hostel and the street corner, the film honors their everyday lives, the ones that aren’t devastated by headline-making violence or decorated with red carpet premieres.

In a way, the film’s 73 minutes feel more like a thoughtful reality show than a documentary. Not because the girls on screen are petty or engaging in a catfight — though that is sometimes the case — nor because purportedly real goings-on are staged, as is most likely the case in reality shows like Keeping Up With the Kardashians. In fact, nothing was staged and hardly anything was prompted. “It was a process of pure discovery. We said, on day one, that we would never ask them to do anything,” Callatos says.

Rather, Queen of Lapa unites the patience of a documentary with a reality show’s delectable tendency to follow fascinating people doing unfascinating things. The seemingly storyless routines of the girls’ lives become the soulful vignettes of the film.

In one scene, Gabi, a side-bang blonde staying in the Muniz hostel, sweeps the floor of her coral pink room, which is mostly empty save for the open bible bookmarked by teal rosaries. Unprompted by the directors as she’s preparing to head out for the night, Gabi’s out-loud thoughts meander into the subject of being choked out by one john, and almost set on fire by another.

She says it all matter-of-factly, even letting a semblance of a smirk dart across her face. "This could only happen to me," she exclaims, wrapping up her unfortunate stories with a self-deprecation, just as I’ve heard friends bemoan their apparent bad luck after getting yakked on in an Uber.

Another woman, Emilly, in a different scene, flat-irons golden clip-in hair extensions that are laid over a window shutter. With her own hair twirled around a curler, she, too, goes about preparing for a night out. "If you're murdered in São Paulo, nobody knows or cares. One less girl to compete with," she says. Switching out combs, Emilly recalls the time a john tried to rape her. The ebbs and flows of her hair routine carry along her one-sided conversation about her encounters with men. Recalling how she used to have curly hair, which she says made her look like a 12-year-old, she describes one client, an “angel,” who helped her begin paying into her retirement. The way she talks is exactly how the girls I know gab, all sharing stories loosely connected and off-the-cuff.

The tone of their streams of consciousness is melodic, even hypnotic. That’s jarring for me. As an American trans woman and journalist who follows the murders of trans women of color closely, I’m used to justifiably-enraged rallies, news articles ringing the alarm bells, and traumatized sisters grappling with the threat, and experience, of gratuitous violence, a situation similar to the one in Brazil.

The film illustrates something rather obvious that’s still mostly absent from the American cultural repertoire: Girls like Gabi and Emilly go about tiresome chores, like sweeping, and inconsequential tasks, like hair straightening. Basically, travesti and trans women’s daily activities are banal — but, for me, their place in the broader conversation about trans politics is anything but that.

What is representation if we, as trans women, don’t get to have it for our quietest activities? We are multiplicitous people, not singular plot points.

Beyond that, though, Gabi’s and Emilly’s demeanors during their impromptu soliloquies illustrate how the violence they face seems to be average for them. It’s integrated into their everyday lives, as both a fact as well as a meandering thought to share. For this reason, The Queen of Lapa is a much needed intervention into a trans documentary ecosystem dominated by popular films like Netflix’s The Death and Life of Marsha P. Johnson that engage with transgender women’s lives through their deaths instead of their lives. Monnerat and Collatos carve cinematic space for marginalized voices to be set to the tune of their own lives, and not that of haunting piano music accompanied by dimmed lights and staged sets.

"[We] really want it to be playing on TV in South America, to create a broader dialogue,” says Monnerat, about travesti sex workers’ “day to day.” For me, The Queen of Lapa provided an opportunity to do what I’d always wanted to with the trans woman from my childhood: just tag along for the day, re-discovering how a girl not too different than myself, but indeed not myself, lives.