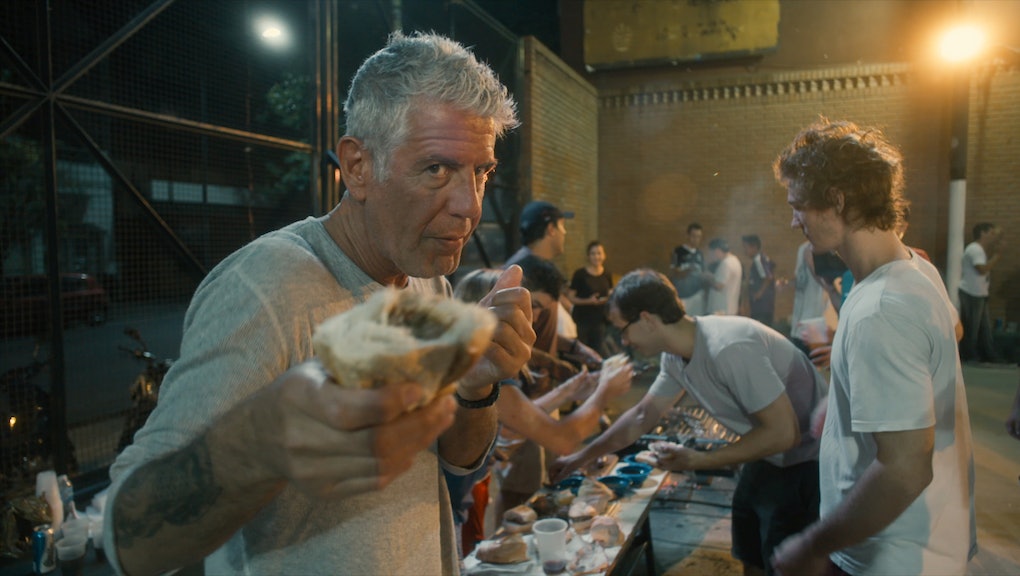 In 'Roadrunner,' Anthony Bourdain shows us the beauty of the mundane

In the loneliest caverns of quarantine my fantasies were about ordinary things. Stale bowling alley pretzels that feel like chewing on a futon cushion. The shared exhaustion of subway platforms. The way a precise jukebox selection can clip jumper cables onto the waning energy of a filthy bar. The low hum anywhere you go of people having feisty conversations — with themselves, with you, with everyone in the universe — about the Mets bullpen. The diner at 3 AM, a few tables away from a guy who is hovering over a Philly cheesesteak like a feral dog, clavicles shining with semi-dried post-club sweat while a muted TV behind the counter displays the 7-day forecast.

I thought about these scenes constantly and I believe that I was not alone, that all of us felt this vague ache and even cried out for it, on Twitter in the middle of the night or in text messages or standing next to kitchen sinks. I am talking partly about intimacy but not specifically that; I am talking about the atmospherics of Out There, anywhere, the familiar drumbeat of a minor but undeniably very-decent night coalescing. I am talking, I guess, about a communion with vibes.

There were Twitter accounts that emerged last spring dedicated to basically this. One that posts submitted pictures of dive bars. Another of bizarre McDonald’s found across the world. There is Old Roadside Pics, a collage of mini golf places in South Carolina, ice cream parlors in Utah with big cartoon bears on the sign. The Liminal Spaces bot. Each of these projects cracked up through the concrete last year, in the middle of a horrible time that is only now just marginally less horrible and only in select ways, and I do not think that was a coincidence. In our rooms deprived of stimuli and interpersonal friction of any kind we dreamt not of indulgence or Santorini, but of simply wading waist-deep back into the battered sanctuaries we’ve known all our lives.

There is a scene early in Morgan Neville’s Roadrunner: A Film About Anthony Bourdain (July 16) in which Bourdain has just arrived in Asia for a six-week trip to film his first ever TV episodes. It's 2000, a few months after the seismic arrival of Kitchen Confidential. In the beginning, the trip is a disaster. Bourdain is uncomfortable on camera. He rolls around in bed taking pictures of his hotel ceiling. He doesn’t make eye contact. His jokes don’t land. Served dinner by his proud hosts in an ornate room in Japan, he might as well be eating it alone in a parked car. It is not until Vietnam, smoking hand-rolled cigarettes, wandering side streets sweaty and unbridled, sitting in the dirt eating noodles, getting drunk beneath a sky that looks, in the minutes before sunset, like blue Gatorade, that he seems to finally be a participant in his own life.

Roadrunner is a fine and even occasionally moving piece of work. The film mostly skips his aimless and destructive early years, when he spent his days getting fired from restaurants, doing heroin, watching The Simpsons and ordering takeout with his first wife, and joins him right as he’s trampolined from pretty good chef to Valuable Media Property. It takes a few steps in a bunch of directions — his attempts to be Barbecue Dad; the shame of addiction; borderline inappropriate hypotheses about his suicide. But that narrative never feels as valuable as the stray clips of him sleeping at airports, chain smoking on dirty couches, eating ramen on little plastic stools, riffing about the moods of different architecture.

Later in the film, in footage from 2018, Bourdain is at the Manhattan apartment of his friend, the artist and musician John Lurie. They are filming a scene for an episode of Parts Unknown about the Lower East Side, the stadium for renegade excess and wild ideas that raised both of them in the ‘80s. They don’t have much planned, they’re in their 60s now, it takes them a while to get across a room. Punk rock is dead; in 2018 the East Village sells pulled pork sliders on a brioche bun. Lurie lumbers around like a groggy bear, then gets lunch from the stove and puts it down in front of Bourdain, sitting there lean and tan like an old cowboy. Lunch is just a pot with four hardboiled eggs in it. In the scene that would later air on Parts Unknown, Lurie says, “I’m not eating this shit” and Bourdain says, “Eggs. The perfect food.” Bourdain dents the egg shell on the wooden table and then peels it and takes a bite. The two of them glance out the window, the ‘80s somewhere far beyond the horizon.

Rewatching old episodes of the series in the days after seeing Roadrunner, I realized how mesmerized he was by these moments with people. They were his atlas. Scenes under an awning in Brighton Beach, staring out at the ocean and eating khachapuri while it rains. Using empty beer cans as party decorations in Borneo. Men in Havana playing dominos and using cardboard inserts from soda boxes to shade themselves. Sitting at a slot machine in a gas station in the Nevada desert eating hot dogs under a holographic framed Miller Lite sign. On the sand in New Jersey with his brother, setting off fireworks, feeling weird about their dad, tearing into cold cut sandwiches on thick bread. Tweeting 10 years ago “The steering wheel is all greasy with In ‘n’ Out Burger.” The brilliant simplicity of folding chairs and paper plates, the rope-ladder-thrown-down-from-a-helicopter of a cigarette and a midnight pork and cheese sandwich in the Dominican Republic.

Describing New Jersey, in a 2015 entry on his personal tumblr, he wrote, “The smell of dune grass. Vanilla salt water taffy. Fried clam strips. These things should be eternal. They are eternal.”

In most of his scenes, there is a tenderness but also melancholy, not quite doom but a recognition that we are powerless to life’s tectonic shifts. In the meantime, this is what we have. These are our purest, most honest ambitions. His shows could have existential themes, they could be sly political inquisitions, there were cinematic presentations of haute cuisine, but he knew it is not our sermons and grand gestures that define us.

Talking once in 2016 about refusing to do retakes, he said, “What if you are a Vietnamese rice farmer and I am coming into your house to eat dinner and we do a scene where I am shaking your hand and say ‘I am very happy to see you’ and then the camera guy says we missed the shot? And I do it again, just as sincerely. What do you think of me now? You think I’m an insincere asshole, of course.”

He could sense bullshit, a sort of spiritual fraud, the way a horse recognizes an approaching storm.

He was constantly interrogating himself. He could sense bullshit, a sort of spiritual fraud, the way a horse recognizes an approaching storm. Roadrunner tracks him from the sleeveless menace he was in his restaurant days, to his mid-career phase as ruthless critic of bourgeois fascinations, and then through his nearly two decades on television, where he was worshiped as a kind of symbol of backstreet dignity.

Through it all, almost inexplicably, he had become even less righteous. Earnest without being rude, affectionate without being saccharine, fervent but without the homilies. He managed to reconcile fame and integrity. He was all of his impulses and compulsions laid bare, all of his rotten edges, always reminding us of his need when he was younger to be cool, and what a fool’s game he realized that was. Wanting to seem defiant, but in the way of a strung out front man and not defiant like “hedge fund manager who just beat the trial on a technicality." Telling us the things he did for love. The times he cared too much, the times he didn’t care at all. He was working on it. Somewhere across the world, drinking a heroically mediocre beer.

Days before Bourdain died, he purchased a painting from Lurie. At the center of the piece is a slender man, painted shiny copper-orange, like a new penny. The man is at the bottom of a deep blue sea. Above his head is a knotted forest of seaweed. The man’s shoulders are slumped, he’s looking off the canvas, almost like he’s trying to figure something out. The title of the painting is, “The Sky Is Falling, I am Learning to Live With It.”

More like this
The 8 best reality shows you're not watching, but should be
By Brandon Yu
What is sploshing, the food fetish that's taking over TikTok?
By Melissa Pandika
Steve from 'Blue's Clues' gave us the closure we didn't know we needed
By Kara Weisenstein
Stay up to date