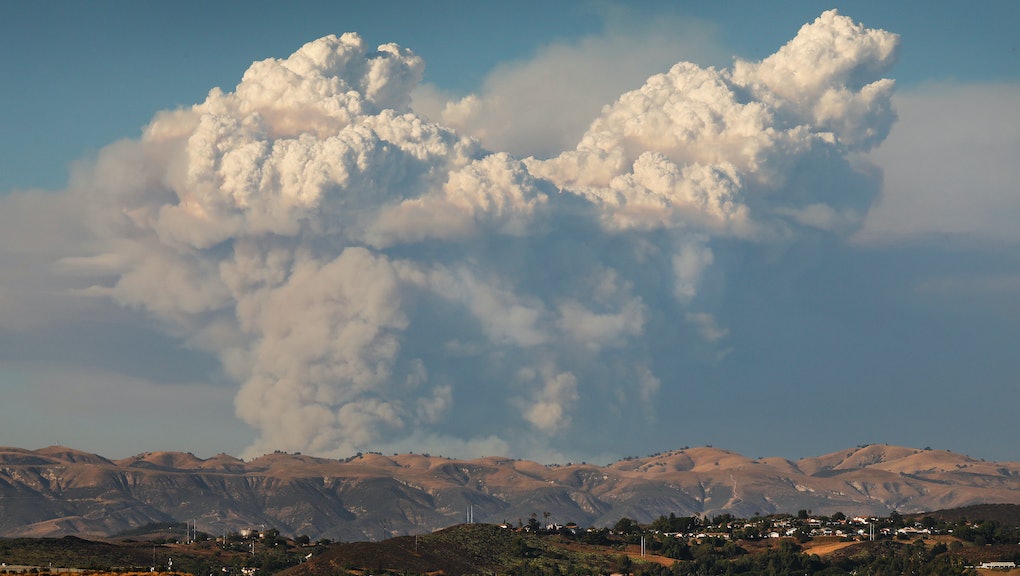 Incredibly rare "fire tornadoes" hit California this weekend, because of course they did

The weekend brought devastating weather to Southern California, where thousands of people were forced to evacuate from their homes as a wildfire destroyed more than 18,000 acres of land in Los Angeles County. These types of fires have become an all too familiar occurrence in the state in recent years. But it's not just any year, it's 2020, where familiar types of terrible occurrences just isn't enough. On top of the rolling wildfire that has knocked out power and displaced families, California also experienced the rare and terrifying weather phenomenon known as a fire tornado.

The fiery twister was spotted on Saturday near one of the ongoing blazes near Lassen County, California. It was one of at least five rotation signatures picked up by the National Weather Service (NWS), though not all of the whirling winds could be identified as fire tornadoes, according to the New York Times. However, one was enough to prompt NWS to issue a tornado warning in the region, alerting residents that they could see winds capable of "producing a fire-induced tornado" and wind speeds of at least 60 miles per hour. It was the first time in history the Weather Service issued a warning for a fire tornado.

The confirmed fire tornado appeared out of a pyrocumulonimbus cloud, which NASA describes as "the fire-breathing dragon of clouds." These types of clouds form above the type of intense, rising heat that one would see in a fire or volcano. As the cloud forms, it can pull in smoke, dirt, and even the fire itself as it starts rotating above the flames. This can do significant damage down below, carrying the fire across acres of land and causing damage along the way. It also can do harm to the environment, according to NASA. The spinning storm cloud acts as a chimney, funneling smoke into the Earth's stratosphere.

Fire tornadoes don't happen often — or at least they aren't reported often, as a report from National Geographic suggested that they may be more of a common occurrence that we realize. When they are identified, it is often because they resulted in a considerable amount of destruction. In 2018, a fire tornado swept through California during the devastating Carr Fire. It produced wind speeds of up to 165 mph and had an internal temperature that exceeded 2,700 degrees Fahrenheit. NWS determined the flame-filled twister was the equivalent of an EF-3 tornado, which FEMA states can collapse walls of homes and uproot forest trees. That fire tornado claimed the lives of two firefighters who were trying to put out the flames.

The fire tornadoes that occurred over the weekend appear to have been less destructive than the one that cropped up from the Carr Fire two years prior, but the prospect of such a frightening weather event still looms in the region. The wildfire that produced the fire tornado is still just five percent contained.

More like this
"Brood X," a plague-level cicada infestation, is coming for us this spring
By Rafi Schwartz
Texas officials responded to the winter storm with propaganda they got from a pro-fossil fuel think tank
By AJ Dellinger
Leaked calls reveal the conservative "master plan" to tank climate action
By AJ Dellinger
Stay up to date