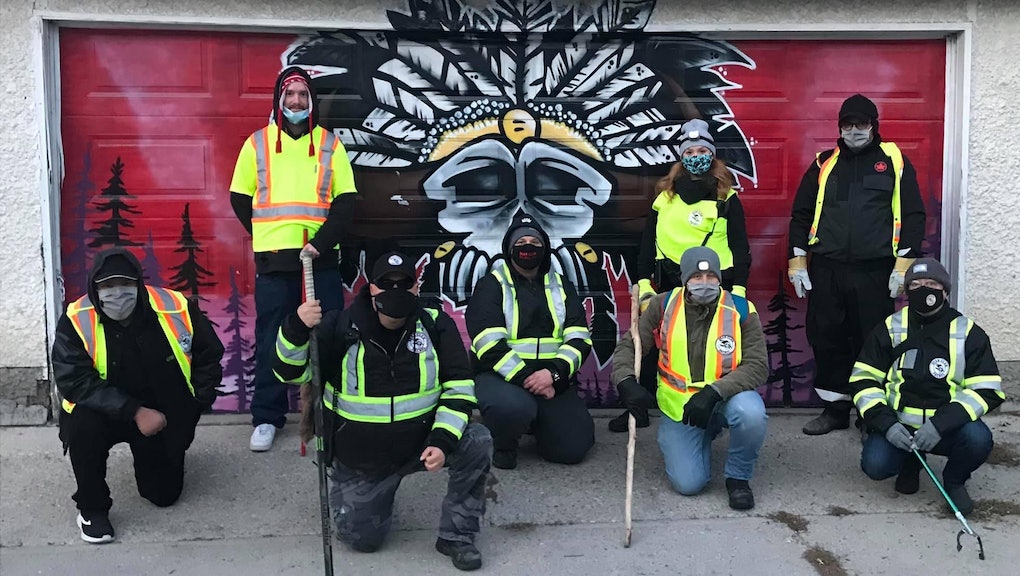 Since the police killing of George Floyd catapulted police defunding and abolition onto national newscasts and global dialogues, scores of commentators have theorized on the viability of developing alternatives to police services, and what those alternatives might look like. But Indigenous organizers would point out that they already exist — and that they’re technically not alternatives at all. Instead, they see modern policing as the alternative, a colonial addition to traditional modes of community safety.

One example of a longstanding community-led service is Canada’s Bear Clan Patrol, a network of local chapters serving roughly 50 communities across the country that organizes and conducts volunteer-led community safety patrols and outreach. “The Bear Clan has been around for thousands of years,” Joe Boysis Jr., a volunteer with Bear Clan Patrol in Calgary, Alberta, tells Mic. “I don’t even know if we can call it an alternative. It’s our traditional cultural responsibilities, rather than a career.”

Bear Clan is committed to a vision of safety that values harm reduction, mutual aid, and non-judgmental, non-violent engagement and support. Bear Clan volunteers share food, water, Naloxone (an opioid overdose reversal treatment), and other needed supplies with the community. Boysis Jr. says the group’s diverse makeup means that they’re representative of and knowledgeable about their community’s circumstances; if they’re interacting with women-identified sex workers, for example, they let women who’ve experienced that work lead the interaction.

“We’re on the street interacting with people. ... We want them to feel safe in this anti-Indigenous society.”

“We’re on the street interacting with people, listening to their stories of being discriminated against, being made to feel unwelcome,” says Boysis Jr. “We want them to feel safe in this anti-Indigenous society.”

Indigenous-led services like Bear Clan Patrol have been operating across North America for centuries. Since European colonization, they’ve often functioned as a critical community protection group, responding much like the Black Panthers did as a grassroots bulwark against oppressive, racist conditions. Community safety groups like Bear Clan, Ikwe Safe Rides, and Drag the Red, along with a host of other solutions imagined and implemented by Indigenous communities across North America, provide instructive frameworks for movements working to defund and abolish police services.

But Indigenous-led community safety services (like others across North America, including Minnesota’s American Indian Movement Patrol) are also indicative of institutional violence. That is, they’re a product of necessity — and often they’ve evolved as defense mechanisms against brutal conditions. Leah Gazan, the federal representative for the Winnipeg Centre electoral district, tells Mic that Bear Clan Patrol was initially created by Indigenous community leaders Larry Morrissette and Mitch Bourbonierre in the 1990s after the murder of 13-year old Joseph “Beeper” Spence, a First Nations youth. The newly formed Bear Clan (and partner group Mama Bear Clan, an explicitly women-led iteration of Bear Clan Patrol) grew in part as a response to the murders and disappearances of Indigenous women, girls, and Two-Spirit folks. Meanwhile, Drag the Red, a volunteer group that searches the city’s Red River for bodies, started to pick up the state’s slack in searching for missing Indigenous family members.

These services are especially critical given the harms done by police to Indigenous communities in Canada. Over the course of 2020, police have murdered or been involved in the deaths of at least four Indigenous people across the country — including Rodney Levi, Chantel Moore, Eishia Hudson, and Regis Korchinski-Paquet. Federal police in Nunavut, the territory in northern Canada, were recorded ramming an Inuk man with their truck, while another video showed police in Alberta beating Chief Adam Allen from Fort Chipewyan First Nation. In August, a video showed a Royal Canadian Mounted Police officer in Northwest Territories yelling, swearing, and entering a residence with an axe — all in response to a mental wellness check.

These instances, from both remote and urban communities, demonstrate what could be construed at best as a failure of federal law enforcement. At worst, they reflect a system committed to violent, racist policing practices.

Gazan explains that during COVID-19, Indigenous women in Manitoba have experienced violence at significantly higher rates than non-Indigenous women. “It’s very apparent that we have issues with systemic racism in policing,” says Gazan, noting additionally that in April alone Canadian police killed three Indigenous people across the country. “It’s no secret that the majority of deaths, certainly in the part of the world I live, have been Indigenous. I don’t think that’s a coincidence.”

The solution, says Gazan, isn’t to reinvent the wheel. It’s to reinvest in “community-led initiatives that were here long before this police state.”

Boysis Jr., who is from Samson Cree Nation and grew up in Pigeon Lake, Alberta, says that when he moved to Calgary, his friend gave him a warning: “You have to watch out for the Calgary Police Service ‘cause they like to beat up Native people.”

Boysis Jr. experienced that targeting, he says, when he was pulled over and put in the back of a police van over an expired license. While shackled in the back of the van, one of the cops began hitting on his girlfriend. Now, when he’s walking Calgary streets on patrol with Bear Clan, Boysis Jr. says he and other volunteers will often simply stand as witnesses when police are interacting with a racialized person. The idea is that if they know people are watching, police may be deterred from indulging their ugliest temptations.

“Definitions of ‘public safety’ have to be reconfigured to what keeps all of us safe, not just what ensures the comfort of gentrifying urbanites, landlords, and property owners.”

“You look at police forces around what is now known as Canada, how they came about, how the [Royal Canadian Mounted Police] came about, a lot of police forces started the exact same way,” Boysis Jr. says. “I guess you can call it anti-Indigenous, is what they were.”

Daniel Stephens, a member of advocacy group Winnipeg Police Cause Harm, tells Mic that Winnipeg police have stated that they have insufficient training to address 80% of calls to which they respond. A corresponding budgetary reduction, then — with funds directed to organizations better equipped to service those needs — is simple logic, he says.

“The point of abolition is to build new systems,” says Stephens. “We also have to realize that the idea of a ‘one-stop solution’ to social issues like policing misses the point that many services and infrastructures have to be improved. ... Definitions of ‘public safety’ have to be reconfigured to what keeps all of us safe, not just what ensures the comfort of gentrifying urbanites, landlords, and property owners.”

Manon Timshel, a coordinator with a newly minted Bear Clan Patrol group in Portage La Prairie, Manitoba, says that sometimes folks mistake their directive for a “clean up the streets” narrative. She says that’s not what Bear Clan is about.

“Our volunteers show up, and they bring suckers, not baseball bats,” Timshel tells Mic.

James Favel, former executive director with Bear Clan Patrol, was responsible for reviving the defunct community group in 2015 after its 1990s iteration fizzled out after three years. “We’re not trying to replace the police,” says Favel. “We’re there to tend to the sociological issues of our community.”

Favel, who lives in the Winnipeg communities where Bear Clan patrols, says the group’s food distribution program in Winnipeg has brought in and distributed around 350 tonnes of food this year. “Our goal has been to empower the community,” he says. “It doesn’t require violence, it doesn’t require confrontation — it requires connection.”

Favel emphasizes that he personally isn’t anti-police in general, but notes that directing the salaries of just two Winnipeg police officers to Bear Clan could secure two primary health care aides and a mental health care worker for the city. Redirecting two more salaries, he says, could provide even more resources, like a worker to support community members navigating employment insurance benefits.

“That’s just from realigning the salaries of four officers,” says Favel. “We have 1,500 Winnipeg police officers. You can’t send a hammer to do the job of a paint brush.”

In Portage La Prairie, a city of around 13,000 people that sits an hour west of Winnipeg, Timshel understands that in many conservative communities across North America, advocating for police defunding is taboo. Prior to Bear Clan’s operations in the city, community members would call the police to clean up needles. Now, Bear Clan operates a well-equipped needle team to respond to safety needs without potential for violence. “We absolutely do receive the feedback that [community members] feel much safer that someone comes with the equipment to handle it in a timely manner,” says Timshel.

Amber Beaulieu, chairwoman of the Indigenous Women’s Council that provides guidance for Portage La Prairie’s Bear Clan Patrol rooted in traditional teachings and culture, says that some Bear Clan chapters have been ostracized because of statements perceived as “anti-police,” a fracture that has since spawned a new Indigenous-led safety group that explicitly avoids police cooperation. “A lot of people are hesitant to speak about this, but I have no hesitancy to voice my opinion about defunding police,” says Beaulieu. “It’s a conversation that needs to be happening.”

This broader societal violence towards Indigenous folks, and in particular Indigenous women, girls, and Two-Spirit individuals, is part of the reason why Indigenous women in Winnipeg started Ikwe Saferides, a taxi service dedicated to providing safe rides to women-identified people in the city. Some 70-80% of the women who access the service are Indigenous. The group is entirely volunteer-based and has fulfilled over 100,000 rides to date, says Christine Brouzes, a co-director with the group and a lead facilitator for the 2016 national roundtable on Missing and Murdered Indigenous Women and Girls. Brouzes tells Mic that the group isn’t just a ride service; Ikwe’s drivers also often help shop, carry groceries, lug bags, and just lend an ear for community members in need.

Solutions like Bear Clan and Ikwe — operating on shoestring and non-existent funding, respectively — want to move mountains for their communities. But for that to become reality, localized community approaches have to be valued and supported. A simple first step toward this is to siphon funding and resources from police services to these operations.

“We need to be looking at the political climate of different towns and cities because that does matter,” says Beaulieu. Stephens agrees that Winnipeg’s organizing — Bear Clan, Ikwe Saferides, and Drag The Red all originated there — is instructional, but maintains that each community should “cast a wide net for strategies that might work for them.”

“Each situation will be different,” says Stephens, “and it’s important for the communities directly affected to be involved and consulted while constructing alternatives.”

The uprisings led by Black communities across North America this year demonstrated that alternatives to police services are not simply a suggestion. They’re a demand, and one that’s within reach. Luckily, the frameworks for change already exist. Timshel, who worked as a paramedic for six years, says that community response services should be modeled on the creative problem-solving of Indigenous leaders.

After all, says Timshel, “need is the mother of invention.”

More like this
Jailhouse lawyer Johnnie Cook is fighting for pandemic justice
By Mai Tran
These organizers are fighting to make sure non-English speakers get vaccinated, too
By Vanessa Taylor
The GOP's anti-trans crusade is ramping up — and explicitly targeting kids
By Vanessa Taylor
Stay up to date