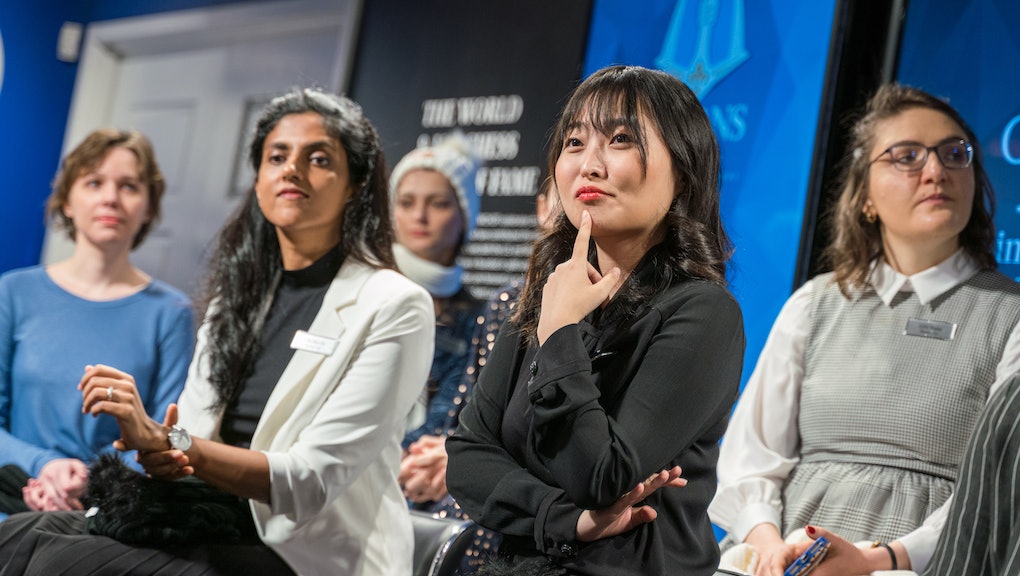 Inside the cutthroat world of women's professional chess

To observe the Cairns Cup, an elite invitational women’s chess tournament that takes place in St. Louis, Missouri, I had to surrender my phone. A security guard checked my bag for “grenades” (his words, not mine) and wanded me down with a metal detector before letting me inside.

I was one of only a few spectators, standing in a cordoned-off area a respectful distance away from the tables where pairs of women squared off to kill each others’ kings. Watching chess is extremely slow, with big gaps in the action as opponents puzzle out strategies. But when they move, the women strike like snakes. Other than the clack of plastic being cleared from the board and the flip of a timer, it’s nearly silent.

Evidently, St. Louis considers itself America’s Chess Capital. The Saint Louis Chess Club occupies a storefront in one of the poshest corners of the city. Upstairs, past the words “quiet please” painted in the stairwell, is a carpeted playing hall where scores of chessboards stand at attention. Little bowls on various tables contain Saint Louis Chess Club-branded pencils, for players to fill in their scorecards. The first time I visited, one evening before the Cairns Cup kicked off, little clusters of players — mostly older gentlemen but a handful of teenagers, too — dotted the room.

The Cairns Cup is a big deal for a handful of reasons: it’s the highest-rated all-female tournament in chess history, for one thing. The Fédération Internationale des Échecs (FIDE), the international chess governing body, publishes monthly rankings of top players, and all the women competing in St. Louis have a rating of at least 2400 (which is really good; the highest rated player in the world, 29-year-old Magnus Carlsen, has a 2872).

Husband-and-wife co-founders of the Saint Louis Chess Club, Rex Sinquefield and Dr. Jeanne Cairns Sinquefield, created this particular tournament to promote chess to women and girls. During the Cairns Cup opening ceremony, Rex Sinquefield joked he thought women’s chess would be a cheap initiative. “What could that cost?” he posited. But the prize money for the Cairns Cup is great — $180,000 in total. It’s the largest sum for any women’s chess tournament outside of the Women’s World Championship. For context, however, the 2020 world chess championship prize fund is $2M euros. While the 2020 women's world championship fund is $500,000 euros

Ten women hailing from seven different countries compete for the prize. They play each other round-robin style over the course of about a week, and whoever has the most points at the end wins. The youngest player is 16-year-old Carissa Yip, who’s American. The eldest, Irina Krush, also from the US, is just 36.

32-year-old Humpy Koneru from India is the second-highest rated player in the tournament overall, with a FIDE rating of 2580. She’s currently the third-highest rated woman in the world.

“It all started when I was six years old. I saw my father playing chess,” Koneru told me. “He's an internationally rated player, so that's how I got attracted to the game. I started learning from him.”

A bona fide chess prodigy, she won her first tournament at age seven.

“He never intended to make me a chess player. He just wanted to make me a sports person,” Koneru said of her father's inspiration. Even when she won tournaments — and she was winning a lot of tournaments — her dad would point out her mistakes. “He's a very tough coach. We never had a father-daughter relationship when I was playing a tournament,” she said.

Koneru became a Grandmaster in 2002, when she was just 15. She was the youngest woman to achieve the title until 2008, when she was unseated by 14-year-old Hou Yifan, who’s currently the top-rated woman in the world. Koneru got married in 2014 and says she wanted to have a baby before she was 30. So, in the prime of her career, she chose motherhood and took a break.

Now she’s clawing her way back to the top.

“The comeback is not an easy job. I'm not sure whether I'll be as successful as before,” Koneru said. “But I thought, in life everything is equally important. Not only the profession, but you also need to have a happy family life.”

When she came back to chess, Koneru threw herself into the deep end. She competed in the strongest tournaments and struggled to regain her footing. “I was just out of practice for two years. Coming back, I was straightaway playing at the top level. So yes, I found I was lacking a lot of things, but slowly as I started working, it came back.”

The Cairns Cup represents a new frontier of sorts for all female chess pros, though the board is still staggeringly uneven. “Men have had these kinds of invitational tournaments with good prize funds for many years, but for women, it’s just started off,” Koneru said.

It’s not that there aren’t girls interested and talented at the sport — Koneru said growing up in India, there were tons of other girls who played, but around age 13 or 14, when the time comes to decide whether to go pro, most of the other women she knew quit to focus on academics. Koneru supplements the prize money she wins with sponsorship deals; right now she’s supported by an Indian oil and natural gas corporation.

Still, lucrative and prestigious tournaments like the Cairns Cup represent positive changes in the male-dominated chess world. “I think probably for the next generation it will be much better,” Koneru noted.

I dropped by the Chess Club on a frigid February afternoon during round six, as Koneru was facing off with GM Alexandra Kosteniuk of Russia. She sat almost motionless, considering the board, taking her time, letting the clock run down to the degree that I, an utter chess novice, worried she was stuck. At that point, Koneru had something like eight minutes left on her timer, compared to Kosteniuk's 28. By the end of their match, she was down to one minute to her opponents three. Koneru won that match. And on Friday, Koneru won it all. After nine rounds of play, she was named champion of the second annual Cairns Cup, taking home the $45,000 first place prize.