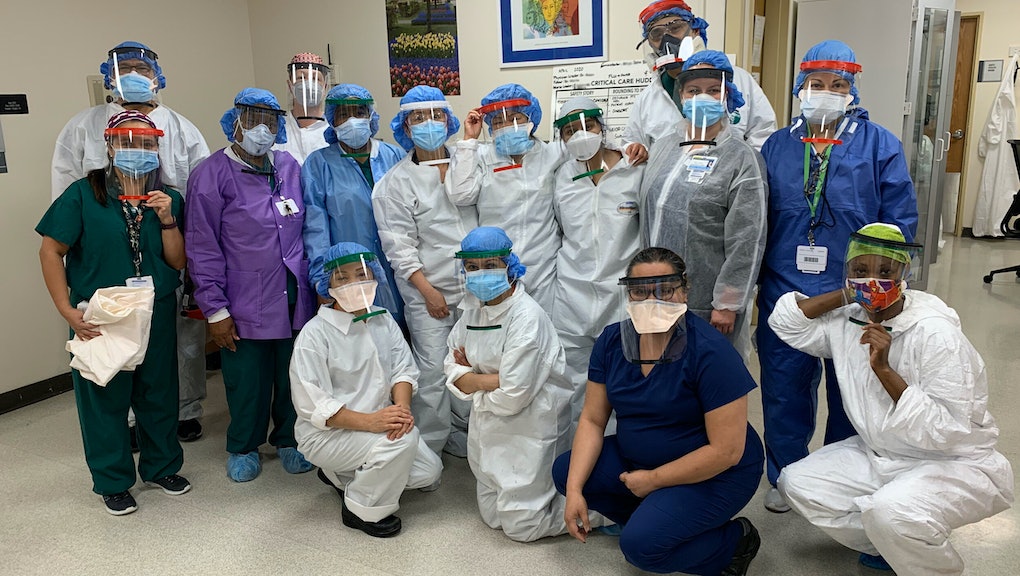 Back in April, millions of people around the world were under lockdown in an attempt to stop the spread of coronavirus, and hospitals were in desperate need of personal protective equipment (PPE) for healthcare workers. On r/JerseyCity, a community on Reddit for residents of the city, a Redditor put out a call to action for all individuals and small businesses in the area with access to 3D printers and other tools. The user's goal: amass a team of volunteers to quickly make and deliver PPE to local hospitals in need. Within days, the Jersey City Rapid Maker Response Group (JCRMRG) was formed.

Justin Handsman, a consultant specializing in technology for derivatives traders, started the operation using a 3D printer to create about 20 face shields per day. He knew that with the help of other makers in the area, they could scale up that operation and provide a significant amount of support where it was needed most. At the time, New Jersey hospitals were suffering from a significant shortage of PPE. Strategy and operations specialist Ashley Strang, a member of JCRMRG, tells Mic that the organization was strategic in how it built its operation from the very start, knowing that a massive amount of PPE was needed.

"We started by building the systems we knew we'd need to scale — leveraging project management tools, defining roles, and structuring our digital workspace." She says that the group used online tools to organize, moving the conversation from Reddit to Discord for daily communications and holding regular meetings via Zoom. According to Strang, the JCRMRG team now consists of 75 volunteers who come from a variety of backgrounds, including small business owners and creators who want to lend a hand to frontline workers in need. Most of the team are helping with printing out masks. "We also have folks who've designed new 3D printed products and parts, and others who have written custom bots to streamline our volunteer intake," she says.

As the group ramped up its production, it started seeking funding for the project. The group set up a GoFundMe, which directs funds to the United Way of Hudson County. All of the donations are managed by the United Way, which uses the money to pay suppliers and vendors. Between their crowdsourced donations and direct partnerships, the group has raised over $90,000 to pay for materials and production costs of face shields.

To get the PPE to people in need, Strang said the group started performing outreach to local hospitals in Jersey City. "At the start of this, the ask was however much we could provide," she says. As they've become more established, Strang says hospital staff and nurses have contacted them directly about their needs. "Our volunteers deliver the shields directly to the hospital, sometimes meeting nurses or staff in the parking lot when the need is urgent." Since the team started operating mass production in mid-May, they have been able to take direct requests from hospitals and individual workers across other industries who are in need of shields.

In a matter of months, the upstart group of makers went from one person making about 20 shields a day to a collective capable of producing as many as 50,000 face shields per week as funding allows. Since launching its operations in April, JCRMRG has produced more than 75,000 total face shields, which have been distributed to hospitals and facilities throughout New Jersey, New York, and beyond. Strang says the group has also provided thousands of 3D printed ear savers (straps that wrap around a person’s head so masks aren’t always resting on their ears) to the medical staff at Jersey City Medical Center, Christ Hospital, Hoboken University Medical Center, and Valley Health System.

A new partnership secured by the volunteer team will stretch their efforts far beyond just New Jersey and the East Coast. This week, JCRMRG announced a partnership with the New Jersey-based Lixil Group Corporation. The company will help JCRMRG with the production and distribution of face shields for first responders and medical workers. According to the group, the support of Lixil will enable JCRMRG to produce as many as 50,000 shields per week. Strang says they plan on leveraging the corporation's teams and facilities across the country to distribute PPE across the U.S.

The growth of JCRMRG speaks both to how challenging the pandemic has been for healthcare workers and how beneficial a collective of people who want to help can be. "Hearing back from the folks who have used the shields has been one of the most fulfilling parts of this experience," Strang said. "We've gotten a touching thank you email from a nursing home employee, a text from an EMT saying these were by far the best shields they've received, and one ICU staff, unprompted, sent us a group photo of their shift team in our shields thanking us for our donation."