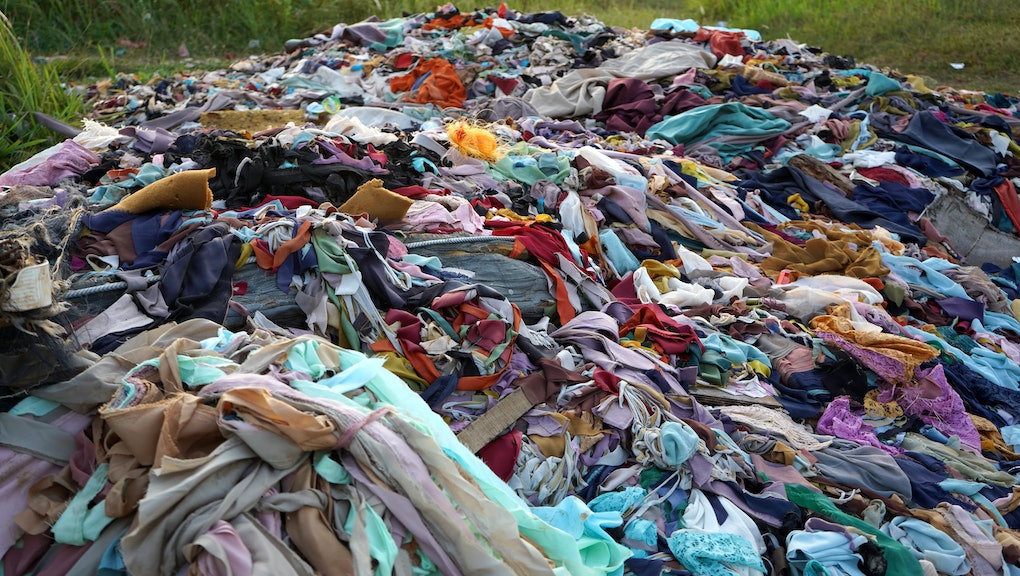 Every day, hundreds of thousands of perfectly usable products are destroyed by retail corporations around the world. Food that has reached its expiration date is sometimes rendered inedible with bleach to deter "dumpster divers"; items in dented boxes are disposed of, rather than given away, to prevent employees from damaging products deliberately; designer goods are ripped to shreds so they can’t be resold for cheaper elsewhere.

Now, in a time when the pandemic has made inequality and deprivation impossible to ignore, such wasteful policies are all the more egregious — and people have taken to TikTok to call companies out on it. Last month, anti-waste enthusiast Anna Sacks, also known as The Trash Walker to her 17,000 Instagram followers, uploaded a post to the social video app inviting people to use the #RetailMadeMe hashtag to share times their employer had forced them to destroy or dispose of perfectly usable items.

Since then, hundreds of TikTok users have responded with their own videos, exposing the ways they say their employers made them destroy all manner of products — including shredding Michael Kors bags, incinerating clothes with old branding, and pouring bleach on just-expired food. Many users said they were threatened with being fired if they attempted to donate the items instead, and thousands more have taken to the comment sections to share similar stories.

I think the stories are really powerful and have the potential to change things. - Anna Sacks

“I've been feeling like this is missing from the common narrative,” Sacks tells Mic. “If [the media] ever covers the topic, it’s as if robots are discarding these items, when actually it's humans who are doing it.”

Anna began salvaging usable items from residential and corporate refuse on "trash walks" in New York in 2017, and two years ago started a petition urging retail giant CVS to donate unwanted products instead of throwing them away. She hopes the TikTok trend will draw much-needed attention to the issue.

“I think the stories are really powerful and have the potential to change things,” she says. “When you hear about the sadness, anger, heartbreak, frustration, and guilt associated with having to destroy items like that, I think it's a necessary story to tell.”

Alexa, a 29-year-old TikTok user, took part in the trend to share her experiences working at a popular salon and beauty store in New Jersey. The products she says she was made to destroy on a regular basis included unused hair ties, combs and brushes, flat irons, and makeup that was unopened but out of season.

“I hate being wasteful. I hate feeling like there's a way that I could help somebody and I simply can't do it,” Alexa tells Mic. “I live in New Jersey and there's a lot of shelters here, places where people need stuff. We literally have stuff we could give them, and I just hated that I couldn't.”

Not to mention all of the unnecessary trash that is just going to landfill. The Earth is dying enough as it is; why not try to help?”

Maddie, a 20-year-old who worked at tween girls’ clothing store Justice in Richmond last year, tells Mic employees at the store had to destroy products like candy, make-up, and bath bombs if they were damaged.

“I asked my manager why the employees couldn’t take the damaged items home,” she says. “My manager explained that corporate doesn’t want employees to damage items on purpose so they can have them for free.”

It just made me feel wasteful. I felt like there were so many different possible outcomes for that stuff.” Justice did not respond to Mic's request for comment.

The #RetailMadeMe trend is another example of a generation of young people who are more outraged by the environmental crisis we’re facing than any generation before them. Last year, outsourcing company CGS’ Retail and Sustainability Survey showed that Gen Z shoppers are driving the demand for ethically produced goods, and are more willing than the general population to pay more for a sustainable product.

Eco-conscious youths have become the new face of climate activism, too. Youth-led organization SustainUS, for example, empowers young people to advocate for justice and sustainability at UN conferences, while dedicated campaigning by the Sunrise Movement last year resulted in 16 of the 24 Democratic presidential hopefuls signing onto their Green New Deal goals. The movement most recently delivered president-elect Joe Biden a climate mandate, demanding the creation of an Office of Climate Mobilization. Biden also last month announced a newly created environmental position, the Presidential Envoy for Climate, to be filled by John Kerry.

While social media is a powerful tool in pressuring big corporations to behave more ethically, it’s disheartening that such a massive, grassroots effort is needed to achieve something that is in humanity’s best interest.

“My ideal situation is for corporations to willingly change, just because it's the right thing to do,” Sacks tells Mic. “But as I've seen with CVS, where I started this petition and it has over 400,000 signers — that hasn't been enough to get CVS to fully change. So I think in the absence you need some sort of external force, and that can be government regulation or consumer pressure.”

A spokesperson for CVS tells Mic, “We work with numerous nonprofit organizations to arrange for damaged or near-expired goods from our stores to be donated to people in need … Our product disposal guidelines and procedures comply with applicable state and federal regulations, and they are consistent with that of the retail industry.”

If the US government did introduce a ban on companies destroying usable products — something Anna is currently petitioning for — they wouldn’t be the first to do so. Under a law introduced earlier this year, retailers in France must now reuse, recycle, or redistribute any unwanted items to prevent waste. It has also been law for French supermarkets to donate unsold food, rather than destroy it, since 2016.

The least these companies can do is start showing a little grace and generosity. - TikTok user Alexa

Anna hopes to see more companies changing their policies in the future, but stresses that the root of the problem lies in overproduction, and our unsustainable demands as consumers. “We need to be okay going to Dunkin’ Donuts, and if they're out of donuts with chocolate frosting, maybe you have vanilla frosting instead,” she explains. “We need to be okay with not having whatever we want at that exact moment available to us. Because the alternative is a lot of waste.”

While retail waste is environmentally irresponsible, the #RetailMadeMe trend has revealed the impact these policies have on the people being forced to follow them, too. Many of those who posted videos expressed guilt at having to throw away items some people desperately need. Alexa tells Mic she would try not to damage products too severely, but being watched by other employees made it difficult. “I feel like in this capitalist society that we live in, the people at the bottom are always the ones who have to do stuff that exploits other people,” she says. “Because we're at the bottom, you're not giving us much choice.”

Especially at a time like this, where so many people are out of work and money, but they still have to take care of themselves like everybody else, the least these companies can do is start showing a little grace and generosity.”