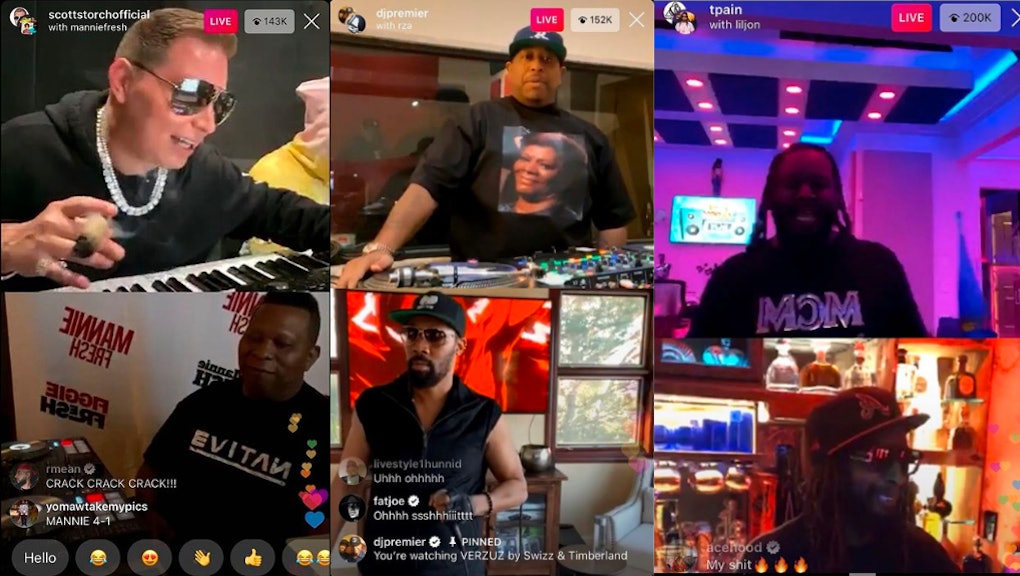 Sports are canceled for now, and it would appear that we're willing to fill the competitive void with just about anything. Instead of March Madness brackets, fans are dotting social media with brackets pitting an entire decade’s worth of indie rock artists or popular television characters against each other. Much like the popular quarantine house memes, quarantine has made us come up with new ways to gamify popular culture. We’re just over a month removed from when the NBA and every other major sports league was indefinitely put on hold, but the games are just beginning for the quarantine-era contest of pop culture greats, as everything becomes a swarm of winners and losers.

One of the best developments to come from this is the rise of beat battles, where two hip-hop producers or artists go head to head, track by track, to sort out who has the best 20 hits. While it’s admittedly been hard for me to get into many live streams for rock and pop artists — the streams are often finicky, and acoustic guitars have their limits — beat battles are the ideal avenue for low-quality live music streaming.

Although one-upmanship has been baked into hip-hop from the very beginning, this trend only found its place in quarantine near the end of March, when Swizz Beatz and Timbaland went live on Instagram for the first Verzuz beat battle. It kicked off a series of contests, between producers old and new — Drake affiliate Boi-1da took on Hit-Boy; T-Pain backed out of a duel with Scott Storch after saying Storch would “curb stomp me,” and was replaced by Mannie Fresh. (T-Pain still went on to battle Lil Jon in a raucous assembly of hits.)

These are for the most part friendly, low-stakes outings with no clean resolution besides what rap Twitter and the Instagram comments deduce. Even if Storch stretched the limits of his collaborations a bit by playing “Cry Me a River,” a song he didn’t technically produce, he was thought to come out on top against Mannie. (But after a landmark decade with Cash Money and being responsible for some of the best production ever on 400 Degreez, Mannie’s legacy should be intact too.) But these battles really end up being a Rorschach test for preferences in era, region, production style, and if hits matter more than skill.

RZA and DJ Premier opened their battle over the weekend (which you can watch in full below,) with about 10 minutes of sound issues and reminiscing overcoming up in similar New York circles before Wu-Tang or Gang Starr became known quantities. Then there was no interruption of hits for more than two hours, RZA launching into “Liquid Swords” and Preemo hitting with Jay Z’s “A Million & One Questions/Rhyme No More.” There’s something gratifying about remembering how good the broader run of Wu-Tang solo careers were, and just how much DJ Premier was inseparable from classic New York hip-hop.

Things could inevitably turn more hostile if Ja Rule and 50 Cent actually go through with a Verzuz battle. Ja said “I’ll behave,” if he gets on a stream with 50 Cent, no matter how unlikely that may seem. If nothing else, the stresses of a pandemic could paper over old beef or cause provocative new wrinkles.

The Verzuz streams ultimately give me hope for what the future of legacy hip-hop could look like. These functioning as appointment viewing right now could just be temporary, with every other avenue for live music out of commission. It might also extend the glow of these careers in a meaningful way, or lead to re-examinations of the best beatmakers in a new era. When the nostalgia-baiting Lovers and Friends festival lineup circulated in February, it seemed too good to be true, until it wasn’t, and now is in limbo for completely different reasons as the fest gets delayed to August 8. Hip-hop was never built to age in the same way that classic rock legacy acts have, but the beat battles prove there may always be an appetite to canonize and dissect these guys.

More like this
How “stoopers” turned New York City sidewalks into trendy, sustainable thrift shops
By Jasmine Vojdani
'Paddington 2' has officially ousted 'Citizen Kane' as the greatest film of all time
By Kara Weisenstein
How late night TV marked the Derek Chauvin verdict
By Kara Weisenstein
Stay up to date