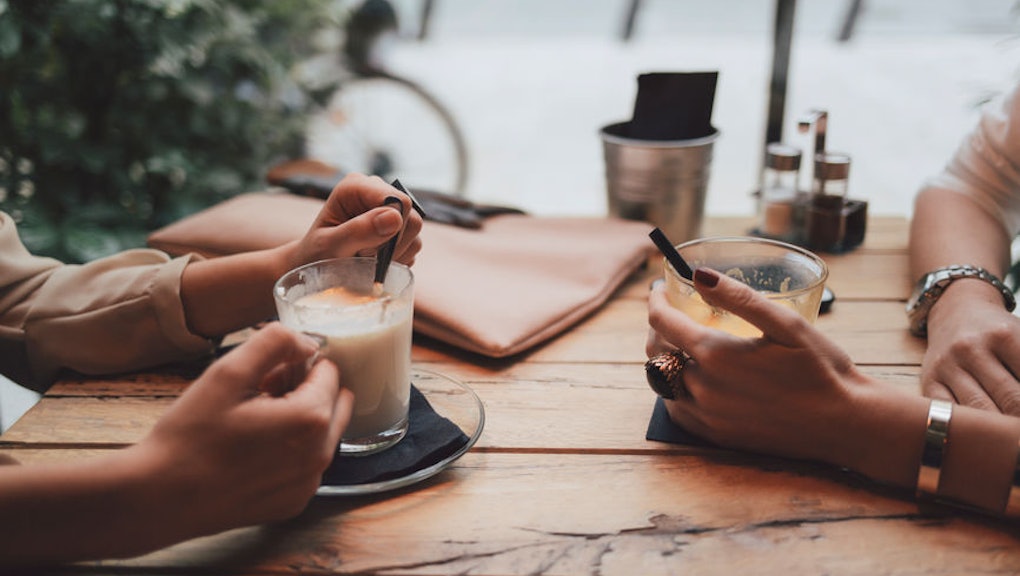 Is a friend's suicide joke cause for concern or just dark humor?

You’re hanging out with a friend and suddenly they say something that you’re not sure how to react to — it’s a suicide joke. Maybe your football team’s kicker missed a game-tying field goal, you’re stuck in demoralizing traffic, or the president tweeted something totally un-American — again. Whatever the circumstance, they suddenly blurt out, flippantly, “Geez, I wanna kill myself.”

What do you do? Do you completely ignore the remark, categorizing it as harmless based on its tone? Do you tell them, like some sort of PSA-wielding finger-wagger, not to say things like that? Do you freeze up, concerned but unsure how to talk about what they said?

Any of those reactions would be understandable, and it can be quite an uncomfortable position to be in. You don’t want to upset your friend by calling them out if they were just trying to get a laugh. And if they turn around and insist they were totally kidding, you might become embarrassed for being so paranoid. The tricky thing about this situation is, dark humor is great and people employ it all the time, with no intention of self-harm. Some people pull off the irreverent/overtly dramatic monotone schtick flawlessly as a comedic tool. But in cases when someone mentions taking their own life, if there’s any whiff of seriousness in it, it should raise a red flag.

“The reason we have to take threats of suicide, or just even jokes about suicide seriously is that oftentimes that is an individual’s cry for help or a statement that they’re really hoping that you can help them to see their options, or get to a better place,” says Maggie Vaughan, a clinical psychologist who specializes in mood disorders and relationships.

A person might joke about killing themselves instead of making a straightforward plea for help, because they're concerned with burdening others with their pain, Vaughan tells Mic. Reaching out in any way to a friend or loved one about suicidal thoughts generates a high level of emotional intimacy that some may not be terribly comfortable with, in either party.

“That’s why, a lot of times, when people hear someone joke or make a reference to suicide, they brush it off in their own minds [and] reason, ‘This must just be a joke; this person’s always had a dark sense of humor,’ instead of taking it seriously, because it is so emotionally intimate [and] they don’t want to feel uncomfortable with that level of openness and closeness,” Vaughan says.

For someone thinking about suicide, even in a fleeting way, an attractive option to express this might be to post references to it online. If they’re not outright anonymously posting, there’s just that much more disconnect between them and the readers absorbing their thoughts online. Tweeting jokes or thoughts about suicide became such a problem that Twitter published webpages covering how to identify posts about self-harm and the company’s approach to dealing with users who post such content.

“We take it incredibly seriously,” a Twitter spokesperson tells Mic, referring to users tweeting about taking their own lives, even in what could be perceived as a joke. “We look at how we can help people in these instances. Oftentimes people come to Twitter to have incredibly difficult conversations, and we want to be a resource to them, but not only that, we want to connect them with experts if that’s the best way [to handle the situation].”

Twitter has a feature where, if a user conducts a search for terms associated to suicide and self harm, the results page will turn up regionally specific resources, like the National Suicide Prevention Lifeline phone number, in the U.S., for example. Twitter’s terms of service enforcement team also now differentiates between users suggesting that others inflict harm upon themselves versus a user posting that they may want to harm his or her own self, because “we know, absolutely, the latter has nothing to do with abuse; this is somebody who needs help and we want to get them help as quickly as possible,” the Twitter spokesperson says. “If for example somebody is suggesting that they [may] attempt to hurt themselves, that’s not a violation of our rules; that is a signal to us that we can connect them to somebody who could help, potentially.”

Still, it’s also important to note that joking or meme-ing about suicide, in what one might think a completely harmless and “obviously kidding” way, could be upsetting to others who’ve had suicidal ideations, previously attempted suicide, or lost someone to suicide.

Facebook also has a webpage telling users that if they see a post where someone threatens suicide to “please contact law enforcement or a suicide hotline immediately.” Users can also direct Facebook to the post in question. (The company has also been criticized for building a “suicide algorithm” where artificial intelligence bots scan through posts and determine risk factors, which raised concerns over privacy because the company has reported posts to local authorities, they say, in an act of compassionate outreach.)

There’s also virtually an entire internet underworld worth of memes about suicide, seemingly as light-hearted as they are dark, which some believe can help ease thoughts of suicide. “When you read the threads on these memes, people find them helpful. They don’t feel alone,” Bart Andrews, board member at the American Association of Suicidology, told The Atlantic. “It’s a way for them to anonymously communicate their inner pain in a way that’s artistic, [and] super clever."

Still, it’s also important to note that joking or meme-ing about suicide, in what one might think a completely harmless and “obviously kidding” way, could be upsetting to others who’ve had suicidal ideations, previously attempted suicide, or lost someone to suicide. And making jokes about suicide, some argue, normalizes the behavior, making it difficult for loved ones to tell when someone is genuinely in trouble.

Should a friend or family member broach the subject in real life, though, there is a playbook you can follow. “It is always important to take it seriously and to ask that person directly if that’s really something they’re thinking about,” Vaughan says. If they brush you off, she says, show empathy and concern in a way that feels authentic to your relationship, and let them know that you’re there to talk if they are, indeed, ever thinking about suicide.

If you’re genuinely concerned at this point, enlist the help of professionals — psychiatric specialists or medical doctors, perhaps in the closest hospital’s emergency room if the situation seems serious enough — as well as other friends or family members eager to issue support. They could be in such a dark hole, Vaughan says, that their vision and their thought processes are entirely clouded by it.

So if a person you love makes jokes about suicide, be safe rather than sorry. Rise to the occasion that the intimacy level dictates, and tactfully, compassionately confront them. The worst that’ll happen is that you’ll be forever labeled “the friend that cares too much.” It could be worse.

If you or a loved one are in need of help, call the National Suicide Prevention Lifeline at 1-800-273-8255. In Canada, visit suicideprevention.ca for more information on how to get help.