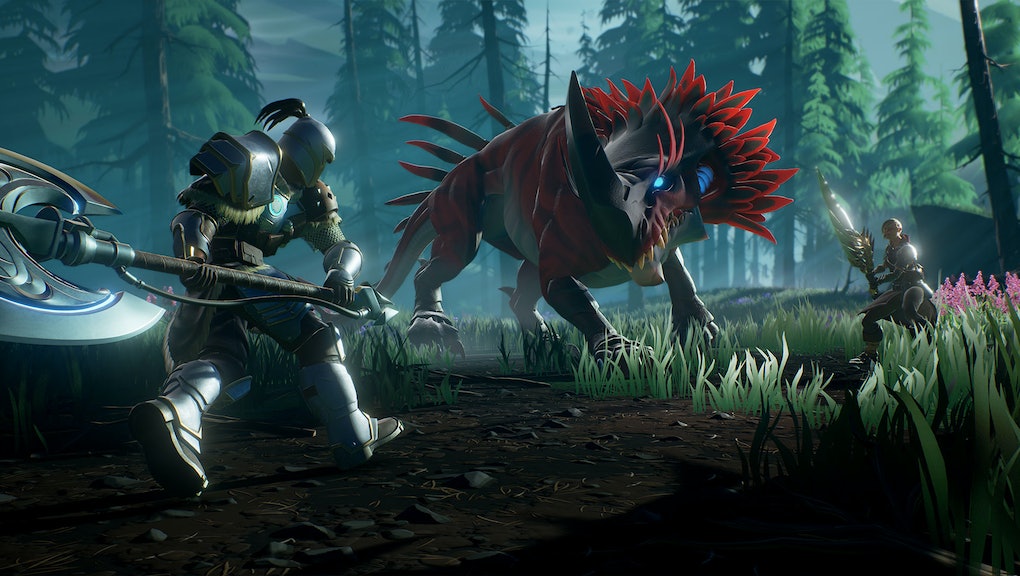 Is ‘Dauntless’ the next ‘Fortnite’? The debut of the free RPG has drawn some comparisons.

It's a little hard to resist comparing 'Dauntless' to the next 'Fortnite', Epic Games' ever-popular battle royale game. The overall design is stylistically smooth and bright, the game is free-to-play, there are Hunt Passes akin to Battle Passes, and it's exclusive to the Epic Games Store — a digital storefront run by the same company behind Fortnite. These similarities haven't gone unnoticed by game reviewers who, I assume, are also finding it difficult to hold back the comparison. But all of these features aren't for mere show. Along with gameplay that takes a page from 'Monster Hunter: World', Dauntless seemingly aims to be a blend of characteristics that caters to players looking for an action-filled bout full of teamwork with few costs to entry.

Today marks the official, full-release of Dauntless for consoles and PCs, making it Day One of the game's first steps into its quest to become a hit among players. With cross-play available immediately at its release, which means console users can freely play together with PC users, here's a look at what this new, multiplayer-friendly game has to offer.

Take down behemoths by working together

Dauntless, developed by Phoenix Labs, is a game that is very open about taking inspiration from Monster Hunter's premise. You hunt large beasts, carve off their parts to craft into gear, and use the gear to hunt even larger and stronger beasts. The difference lies in smaller features such as additional skills and gameplay elements that can add unique strategies to a fight. For example, IGN's PS4 Pro gameplay video shows a player character killing smaller fiends to power up their attacks specifically against the main monster. And Game Informer's early review of the game mentioned a battle that required players to bat the creature's projectiles back to break down a shield. The challenge, however, remains the same: Players need to hunt effectively, either solo or with a team, to bring down increasingly tough monsters.

This requires you to have timing and observational skills. Each beast has certain behaviors and attacks that players need to watch out for in order to fight without getting knocked out all the time. Every weapon has different characteristics that require familiarity and timing, so a player carelessly swinging their weapon around will probably meet an untimely end instead of success. A hammer, for example, is heavier than a sword, and a character's movements will become slower as a result. Players have to adjust their strategies to accommodate for that or, alternatively, find a weapon that clicks best and stick with mastering it.

Once you get to know the behemoth's behavior and the traits of your weapon, you can pinpoint your attacks to make the hunt easier. A timely strike at the leg of a monster might stagger it, giving you an opening to lay on a lengthy attack. Your hammer-wielding teammate could be a monster knock-out queen who gives you plenty of time to cut parts with your sword. In addition to unique weapons and armor, Dauntless also adds an augmentation system that provides further combinations of stats and elements to boost your hunting abilities. The possibilities are endless, which can bring players back for more.

Will Dauntless be the next big hit?

It certainly looks like the game hits enough notes to become popular. Phoenix Labs has taken plenty of steps to use what makes monster slaying in Monster Hunter fun and challenging while keeping the game open to both beginners and veterans to the genre. Dauntless is also the first game to launch with full cross-play and cross-progression for the PS4, which means you can make one account that will share the same character across different consoles or your PC. This comes months after Sony finally relented on allowing crossplay between the PS4 and other game platforms and makes it far easier to set up group hunts between friends. Phoenix Labs also plans to release Dauntless on mobile and the Switch later this year. This could expand the game's reach to its action-loving, target audience even further.

Eurogamer called Dauntless "far more accessible than Capcom's historically impenetrable series," referring to Monster Hunter's slow grind and high difficulty wall for new players. Although some people thrive on that challenge, this key difference could present an opportunity for Dauntless to bridge the gap and attract players who prefer a game that allows them to pick up and quickly play. Phoenix Labs seems to be building that bridge by taking elements of one of the most popular games in the world, Fortnite, and applying it to its game.

Dauntless is available now on PS4, Xbox One, and PC. A Switch and mobile release is planned for the future.