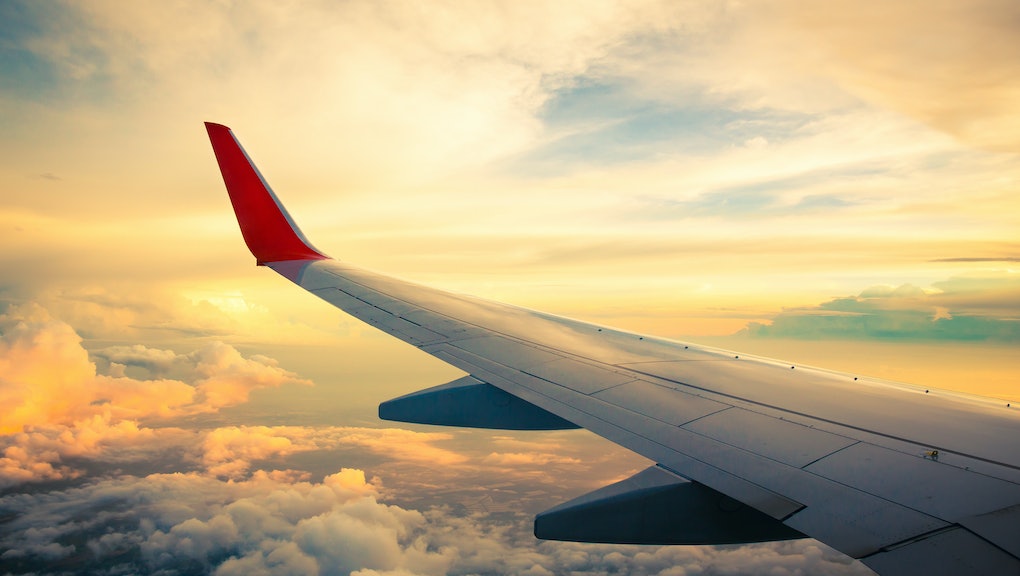 Is flying bad for the environment? Here's how occasional air travel impacts the planet

At the risk of my white male privilege jumping off your screen and doing a jig on your head, I’m going to begin by writing that one of my great regrets through life thus far is that I haven’t been able to embark on any substantial world travel. I’m dying to do so, and am so envious of my friends and relatives who get to go on trips seemingly all the time — and passively boast about it by posting pics on social media. I’ve just never had the money for much travel because people in journalism tend not to have diving boards fixed over a Scrooge McDuck cellar of gold coins. The benefits to travel are endless, but it's also my duty to be conscientious when it comes to how I treat the planet. Air travel is one of the most profound ways people inflict damage on the earth’s ecosystem, and I’d be remiss if I didn’t consider how, as even a brief stint as a tourist, my flying might effect the environment.

Study after study have emerged in the media warning us about how we’re in such dire straits, particularly in regards to global warming. I don’t own a car and have cut beef and dairy out of my diet almost entirely, both of which, as I understand it, reduce my personal carbon footprint.

As far as the tourism industry’s environmental impact goes, according to a 2018 study out of the University of Sydney, it is “a potentially potent contributor to climate change.” “In a business-as-usual scenario,” Arunima Malik, one of the study’s researchers, tells Mic, tourism-related emissions will rise about 44% by 2025, compared to 2013 figures. “What frightens me most is the impact on our natural systems,” Malik adds. The “great barrier reef, for example, our pristine environments and [our] ecosystems are undergoing drastic changes due to human activities.”

When people think about reducing their carbon footprint, oftentimes the first thing that comes to mind is to cut down on driving, because we use a car far more frequently than we hop on a plane. But more than one-tenth of all transportation-related carbon emissions across the United States comes from air travel, according to the EPA, per the New York Times. If I left New York to visit my friends in California, according to the Times, my lone roundtrip flight would emit 20% of the greenhouse gases the average car generates in an entire year.

Maybe soon I’ll finally book that trip to Canada, but a roundtrip flight between New York and Toronto means I’d contribute nearly one third of a ton in carbon emissions to the atmosphere — and to think there will be an estimated 39.4 million flights taken this year worldwide.

I think I’ll travel by train and be totally OK with that, as some estimates say rail emits less than one-third of the CO2 relative to what air travel does. I certainly won’t drive by myself. Single-passenger car trips are actually worse than air travel in terms of CO2 emissions, though carpooling mitigates the rate, because the more passengers per means of transportation, the more efficient it gets.

Even if I make it over to Europe eventually, I certainly would never be the ecocide offender that a travel writer is, like this one guilt-ridden chap from England who recently wrote that, across his 270,000 air miles traveled the past 20 years, he’s contributed to the melting of 260 square meters of polar ice. With another peak travel season having just passed, one that did not result in me getting my sad passport stamped a mere second time, I can take solace in the fact that I haven’t contributed to climate change as much as the near 100 million other Americans who hit the proverbial road this past summer. However, if everyone on earth decided to keep their suitcases in their closets, that would mean the laying off of 319 million workers, and the cutting of $8.8 trillion dollars from the global economy. That would suck, too.

With another peak travel season having just passed, one that did not result in me getting my sad passport stamped a mere second time, I can take solace in the fact that I haven’t contributed to climate change as much as the near 100 million other Americans who hit the proverbial road this past summer.

So if we’re going to travel, Malik suggests a “slow and sustainable” approach — like my rail idea — where we are not “disturbing the ecosystem” quite as much. She hopes that travelers and travel industry leaders soon begin fostering positive change, while “ensuring livelihoods are not affected.” And if jobs are cut, there should be alternatives provided.

The airline industry is already making some alterations with an eye toward greater sustainability. The Carbon Offsetting and Reduction Scheme for International Aviation, a United Nations pact, requires airlines that fly internationally to offset their carbon emissions by 2021 — though Forbes notes the plan won’t be fully implemented until 2027. Independently, some airlines are powering their planes at gates with electricity instead of fuel, and retiring older planes that are less fuel-efficient. Some are also considering reducing fares for flyers who might fill empty seats on flights, making them more efficient, as the fuel spent by the plane is helping to ship more humans at a time. And nearly 100 airports around the world have also achieved “Airport Carbon Accreditation” as part of a voluntary program where they more effectively manage carbon emissions.

There’s a plethora of changes that individuals who must travel — frequently or otherwise — can make to reduce their carbon footprint. It’s more pricey to fly nonstop, but it’s better for the environment to do so because, according to USA Today, “takeoffs and ascent require significantly more energy than cruising at altitude — as much as 75 percent of fuel usage on a flight of 430 miles.” The publication also advises against flying business or first class, because more travelers could fit in a plane if they didn’t take up as much space as they do in those elite quarters. “Buying business class seats encourages airlines to create more in their planes, making them overall less efficient per passenger,” the article says. People should pack fewer items, too, as increased weight on the plane means more energy must be expunged to power it forward. You can also buy “carbon offsets,” sometimes with your airline ticket, which are financial contributions to organizations that are working on projects that reduce CO2 emissions.

Ultimately, though, if you can fly less, just do that. Instead of taking a 45-minute flight someplace, go by car, bus or train, taking in some of the landscape you could never admire from 30,000 feet.

More like this
Are electric cars really green?
By AJ Dellinger
Legal weed packaging is wrecking the planet. What are we going to do about it?
By Mark Hay
We don't trust our tap water — and it's a big problem
By Asher Rosinger
Stay up to date