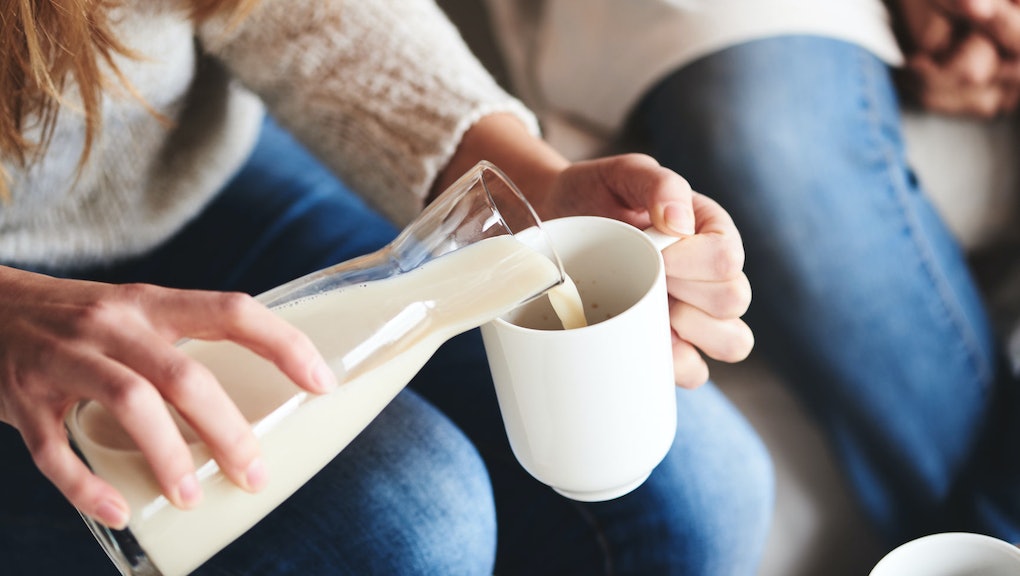 Is oat milk healthy? Experts tells us how it compares to dairy, almond, and soy milk

The oat milk thirst has been real, lately. Cartons of Oatly, Happy Planet, and Elmhurst oat milk have cropped up in grocery store aisles, and baristas at specialty coffee shops pour oat milk foam over their brews. Oat milk retail sales have shot up from $4.4 million in 2017 to $29 million in the United States, Bloomberg reported last month. Like many oat milk stans, I’ve also taken to requesting the good stuff in my iced coffee. I’ve fallen for its creamy texture, and subtly sweet but overall neutral flavor — and like other plant-based milk substitutes, it seems to emanate an aura of fresh, sunny wellness. But how healthy is oat milk, really?

Oat milk is basically oats and water blended together, explains Amy Kimberlain, a registered dietitian nutritionist in Miami and a spokesperson for the Academy of Nutrition and Dietetics. That mixture then gets strained to extract the liquid. Some oat milks contain sweeteners and vanilla or other flavorings, and many are fortified with vitamins and minerals.

Certain brands also offer barista blends, which contain potassium phosphate, an “acidity regulator” that prevents the oat milk from separating when mixed with an acidic drink like coffee, allowing it to froth better, Kimberlain says.

How does oat milk stack up against dairy milk, nutrition-wise?

Many brands enhance their oat milk with the same amount of vitamin A, vitamin B12, calcium, and other nutrients found in cow’s milk, Kimberlain says. For instance, a cup of Oatly’s Oatmilk Chilled contains 350 milligrams of calcium, while a cup of cow’s milk (whether whole, low-fat, or skim) has 300 milligrams of calcium, or about a third of the recommended daily amount). But not all brands fortify their products to make them resemble cow’s milk, so make sure to read the nutrition label, Kimberlain adds.

Oat milk typically has a few more carbohydrates than cow’s milk. A cup of oat milk contains anywhere between 15 and 20 grams of carbs, while a cup of cow’s milk, regardless of its fat content, has around 12 to 13 grams, Kimberlain says. And oat milk contains less protein — about two to three grams per cup, versus eight grams per cup of cow’s milk, regardless of fat content.

The amount of fat in oat milk can vary depending on the brand and variety. A cup of Oatly’s Oatmilk Chilled contains 5 grams of fat, around the same amount as in 2% milk, while a cup of Happy Planet’s Original Oatmilk has 2.5 grams of fat, similar to what you’d find in 1% milk.

Calorie-wise, “oat milk is comparable to 2% milk,” says Sonya Angelone, a registered dietitian nutritionist in the San Francisco Bay Area, who’s also a spokesperson for the Academy of Nutrition and Dietetics. A cup of each hovers around 100 calories.

How does oat milk compare to almond milk, soymilk, and other non-dairy milk substitutes?

Like oat milk, many non-dairy milks are fortified so that their nutrient profile resembles that of cow’s milk — but again, it depends on the brand, so it’s important to read the label, Kimberlain tells Mic.

When it comes to protein, oat milk trails behind pea milk and soymilk, which have around eight grams per cup, Angelone says. But it outperforms almond, cashew, and other nut milks, which typically contain only one gram per cup (most of the protein in the nuts gets left behind in the pulp), and rice milk and coconut milk, which often have less than a gram per cup, or none at all.

Oat milk also packs more calories than many other non-dairy milks, Angelone adds. A cup of oat milk has around 100 calories. Meanwhile, a cup of almond, cashew, or pecan milk contains only about 25 to 90, while a cup of pea milk has around 75, and a cup of rice milk has roughly 70.

Is oat milk a good source of fiber?

“If you’re trying to get fiber from oat milk, look elsewhere,” Kimberlain says. Beta-glucan, a soluble fiber found in oats, can help improve cholesterol levels, but she notes that it’s still too early to say whether the beta-glucan in oat milk offers the same benefits as regularly eating actual oats. Plus, a cup of oat milk has only about two grams of fiber, less than 10% of the recommended 25 grams per day.

It depends on your specific nutritional needs. Oat milk might make sense if you have a dairy, soy, and/or nut allergy, or if you want to move toward a more plant-based diet, Kimberlain says. Consider it as “one of the many alternatives out there,” she suggests. “Double check the label and make sure it’s hitting your needs.”

Account for oat milk’s higher carb and lower protein count compared to cow’s milk, and adjust accordingly. If you relied on cow’s milk for protein, make sure to compensate by adding other protein sources. Say you used to have avocado toast and a glass of cow’s milk for breakfast; if you’ve replaced the cow’s milk with oat milk, throw in an egg or two, or swap out the avo for a nut butter to make sure you’re getting enough protein. (Kimberlain notes that for the most part, Americans have plenty of satiating protein in their diet, but their breakfasts may not contain enough.) So, go ahead and stock up on oat milk, but do so mindfully, in a way that’s healthy for you.