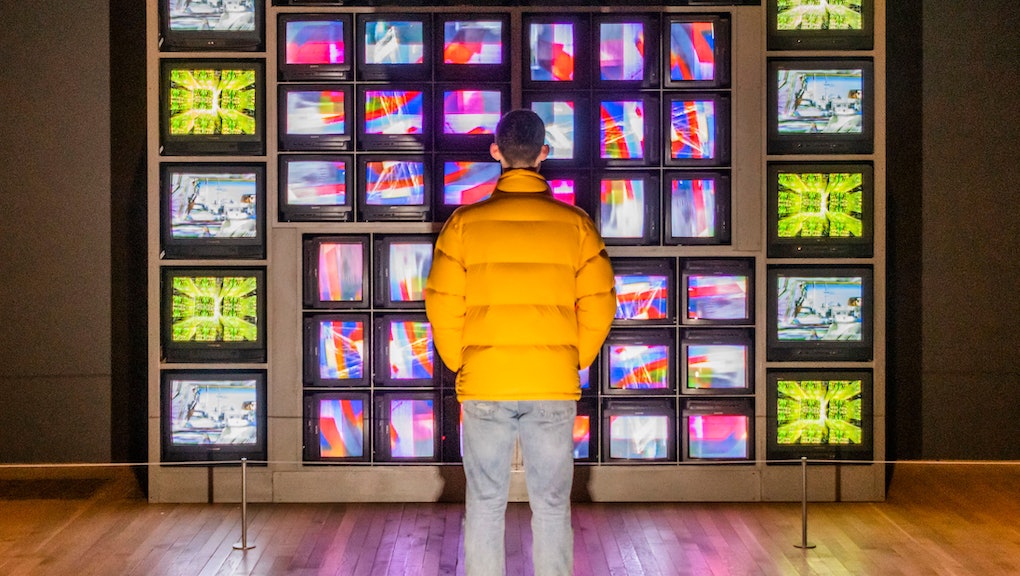 Is there such a thing as too much screen time right now?

Millions of people around the world are currently stuck inside, sacrificing their normal lives in an effort to lessen the spread of coronavirus. Everything from school to business to entertainment and communication has migrated online, meaning most people are racking up significantly more screen time than usual. For years now, experts have been warning that excess exposure to screens can have harmful effects on humans, particularly children. But left with no real alternative aside from using computers and phones for things we'd otherwise do in real life, managing exposure to screens is more challenging than ever. Just how wary should we be of screens and the potential adverse effects of spending too much time staring at them during a time of crisis?

Typically when dealing with screen time, we think about how many hours are spent looking at a device — be it a phone, computer, or TV. That's not a particularly useful measurement. "People should be focused on decreasing stress and staying socially connected," Dr. Pamela Rutledge, the director of the Media Psychology Research Center, tells Mic. Because opportunities for real-life interaction are severely limited right now, Dr. Rutledge says that it makes sense to use the tools that we have to maintain a sense of normalcy and connection to others.

According to Caroline Knorr, the senior parenting editor at Common Sense Media, it's more important to focus on what is appearing on screen — especially when it comes to children — than how much time is spent looking at it. "There's a big misconception about the impact of screen time on kids. The negative correlations are associated with over-exposure to lots of age-inappropriate — highly sexual, violent, psychologically mature — content," she tells Mic. This type of content, meant for older viewers, can have adverse effects on children who are exposed to it, including making them more likely to be argumentative and to act out.

Kids aren't alone in this, either. Adults can similarly have their behaviors changed for the worse when consuming violent or troubling content. While there isn’t a consensus on the full effects of violent or pornographic content, researchers have found some evidence that this type of media can lead to a short-term rise in aggressive behaviors, aggressive thoughts, angry feelings, and even arousal levels in adults. Violent and sexual content can also produce a release of dopamine, which some experts believe can play a role in habit-forming behavior that can potentially lead to addiction to graphic and sometimes harmful content. While the threats of this media to an adult are not necessarily as harmful or long-lasting as to a child, it's probably best to exercise moderation, especially in these high-stress times, regardless of the age of the viewer.

But not all screen time is created equal. "A little extra screen time isn't going to hurt your kids as long as they're mostly consuming age-appropriate, high-quality content or actively participating online with friends — and their exposure is mostly to positive messages, role models, and environment," Knorr says. Similarly, Dr. Rutledge suggests there are plenty of ways to produce positive outcomes from our increasingly digital lives. She says that screen time can facilitate "increased communication within families, new skills — from learning a hobby to leveling up in games," and can be the source of lots of creativity if used properly.

"It's great to use interactive media to stay in touch with loved ones," Knorr says, noting that the American Academy of Pediatrics actually exempts video-chatting with loved ones from its screen time restrictions. She recommends setting up video "playdates" for kids to help them keep in contact and continue developing social skills. "At that age, kids really crave contact with peers, and they'll probably behave better when they can stay in contact." There is also evidence of video chatting having positive effects on adult relationships. According to a study published in the journal CyberPsychology, people who participated in video chats "reported greater bonding with friends" than those who only talked on the phone or through text.

Dr. Rutledge recommends people "set aside their preconceived ideas about what’s 'right' or 'wrong' and make choices based on whether or not they are contributing to one’s wellbeing." For example, we might put a higher value on reading the news and staying informed than binge-watching a sitcom. But Dr. Rutledge notes that over-consuming news can create increased anxiety and fear. So relatively speaking, binging a favorite show might lessen that stress. "The worst that will happen with Netflix is that you get bored," she says. Knorr says that while it's best to try to engage with as much stimulating content as possible, sometimes it's okay to just sit back and binge. "If you're exhausted and just need to chill, kids will absorb good vibes just by sitting with you and watching a show and relaxing," she says.

Given the unprecedented nature of the situation that we are facing, it's best to simply try to make the most of it, even if it isn't completely in line with all of the guidelines given for "normal" times. Dr. Rutledge notes, "The real potential for negative impact is not related to screen time, it is the loss of agency and sense of fear and vulnerability that we all face.” She said that there is research to suggest that what we're going through will likely result in people feeling a sense of trauma, and that, "The more people can do to feel a sense of control, accomplishment and social connection, the better we will all be. Screens can facilitate all that." As for addressing our additional exposure to screens during this time, Dr. Rutledge says, "When people are able to meet face-to-face, it will be time to reassess all kinds of behaviors, not just screen time."

More like this
New study confirms we're right on time for a complete societal collapse
By AJ Dellinger
Amid daily reports of catastrophe, Americans are finally starting to realize climate change is bad
By AJ Dellinger
This is what it looks like when a city floods in real-time
By AJ Dellinger
Stay up to date