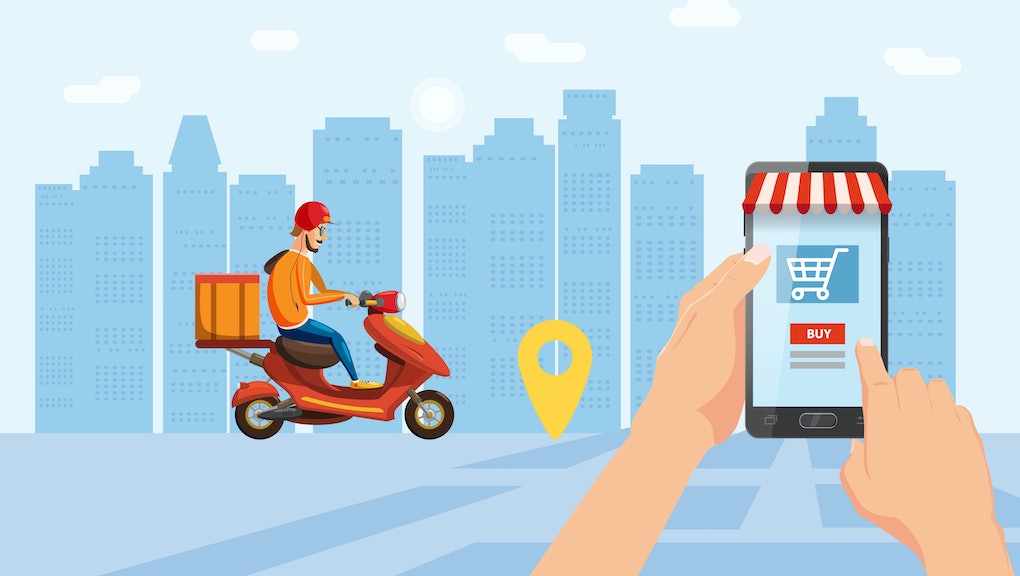 Is your tip on delivery services actually going to the driver? Here's what we found out.

Tipping has always been a part of the delivery economy, but the way in which we tip continues to evolve. On-demand apps like DoorDash, Instacart, and a slew of others have made it easier than ever to have just about anything brought directly to your doorstep — but in revolutionizing delivery service, the companies the effort have also tried to upend the tipping system.

As on-demand services have gotten more popular, tipping has been streamlined on their platforms so people can add the amount they want to tip to their order rather than digging around in their pocket for cash once they hear the doorbell ring. Typically when you tip someone, you expect that money to go directly into their pocket with no effect on the rest of the delivery person's pay. But what some on-demand apps have done is use tips to essentially subsidize a person's pay.

Let's say that a driver expects to be paid $10 on a delivery order from the service they are working for. They complete the delivery and receive a $5 tip. Instead of adding that $5 on top of the $10 earned for the gig, a company might instead count that $5 against the base pay. The driver ends up with $10 total, as expected, but half of it was paid by the customer's tip. The practice steals tips directly from the pockets of workers, and often isn't make clear to people ordering delivery how their tip is used.

DoorDash recently announced that it would stop this practice after it faced increasingly intense amounts of scrutiny. Likewise, Instacart has been accused of similar practice. Earlier this year, an Instacart worker shared receipts that showed they were paid just $0.80 by the company for a gig that took 69 minutes to complete simply because the person who placed the order tipped them $10, which covered the majority of the base pay. If the customer hadn't tipped at all, Instacart would have paid the driver $10.80, but instead used the tip as the person's wage. The company has since shifted its tipping policy to ensure tips aren't used to subsidize worker pay.

Tipping policies should be transparent and easy to find in apps. You should know exactly how much of your money is actually going to the delivery driver and how much is ending up in the coffers of a company with hundreds of millions of dollars already in their bank account. Unfortunately, that isn't always the case. We set out to find just how much of your tips are going to delivery drivers so you can feel confident knowing your hard-earned cash is going to a person who is also just trying to make a living for themselves. Of course, if you want to cut companies out of the equation entirely, you can always just tip in cash.

Daniel Danker, the lead of Uber's driver product, tweeted earlier this week that "100 percent of tips go directly to [drivers] because they've earned every dollar." The company also put out a statement earlier this week, provided to all customers, that states Uber Eats allows drivers to keep tips in full and doesn't count the tip against a person's base pay.

Uber has a dedicated page on its website explaining how tipping works on its platforms. "Tips belong to you and are automatically added to your total earnings," the page states. Uber also does not charge service feeds on tips. There is an exception for drivers who have previously agreed to use services like Xchange Leasing, a now-defunct service that Uber used to lease vehicles directly to drivers, or FuelCard, a no-longer-available credit card that offered discounts on car maintenance. In those cases, Uber can use tips received to make payments toward those programs.

Lyft prompts riders to tip drivers after every trip. According to the company's website, 100 percent of the tip goes to the driver. Tips can be provided for up to 72 hours after a trip is completed. After that timeframe, a rider can reach out to Lyft's support team, provide details of the trip and have the company provide a tip directly to the driver.

DoorDash was one of the longest holdouts to the controversial model of tipping that used tips in order to subsidize a driver's base pay. Earlier this week, the company finally reversed course. The company's CEO Tony Xu tweeted out that a driver's earnings "will increase by the exact amount a customer tips on every order."

As of the time of publication, the company's website does not reflect this change. It still displays the DoorDash's previous pay model of a "guaranteed minimum." Under that structure, drivers were promised a certain amount, say $10, for each delivery. DoorDash only guaranteed that it would cover $1 of that amount as base pay. A customer's tip would then be factored in. If a customer tipped $5, DoorDash would pay the remaining $4. If the customer tipped $9, DoorDash paid nothing more than the $1.

DoorDash did not respond to request for comment on its new tipping policy at the time of publication. It is not clear if the company will continue using its guaranteed minimum model in any way as it shifts to providing tips on top of base pay. The company also has not commented on whether it will provide drivers with back pay for the tips that were previously used to supplement their income.

Instacart is another one of the companies that has come under fire for questionable practices in the past, including well-documented instances of tip theft. Earlier this year, the company announced that it would change its policy to ensure tips aren't used to subsidize a worker's base pay. A spokesperson for the company told Mic that Instacart doesn't use customer tips to supplement payment and 100 percent of tips are now given directly to the Instacart worker. The company also claims it also retroactively compensated its workers who had their tips used as base pay in the past.

In addition to actually making sure drivers get their tips, the company claims to have bumped up its base pay for deliveries. Drivers get a minimum of $5 for a delivery-only service and $7 to $10, paid on a sliding scale, for full-service requests. That base pay is now paid entirely by Instacart. That said, drivers for Instacart have claimed the new payment system is confusing and difficult to navigate, and a report from Vox earlier this year indicated that Instacart hasn't fully sorted out its payment issues.

Postmates prompts users to include a tip after every delivery and won't allow customers to place another order until they either provide a tip or dismiss the notification. A spokesperson for the company told Mic, "Members of the Postmates fleet will always retain 100 percent their tips and unlike competitors customer tips will never be used to eat into their base earnings."

"Absolutely 100 percent of tips go to drivers on Grubhub and Seamless, and we determine a driver’s per-order pay independently and separately from any tip he or she receives," a spokesperson for the companies told Mic. The company claims that drivers have received more than $2 billion in tips on the platform. It also provides a pretty transparent guide of how pay is calculated so drivers and orderers know exactly where money from an order is going.

Grubhub and Seamless (it should be noted that Grubhub owns Seamless) offer a suggested tip amount on each order a person places. The company has a tipping guide on its website which recommends people tip $5 or 20 percent of the price of the meal, whichever is more. The guide also suggests people tip more when placing orders for large groups of people, adding additional cash when there are adverse weather conditions and when the delivery driver has to navigate other challenges to get to your door, like climbing multiple flights of stairs. The company also clarifies that delivery fees aren't tips and does not end up in the pocket of drivers.

More like this
Google Earth's new Timelapse feature is a rude awakening for climate skeptics
By AJ Dellinger
The U.S. is spending millions to develop a nuke-powered spaceship
By AJ Dellinger
Elon Musk's Neuralink made a device that lets a monkey play Pong with his thoughts
By AJ Dellinger
Stay up to date