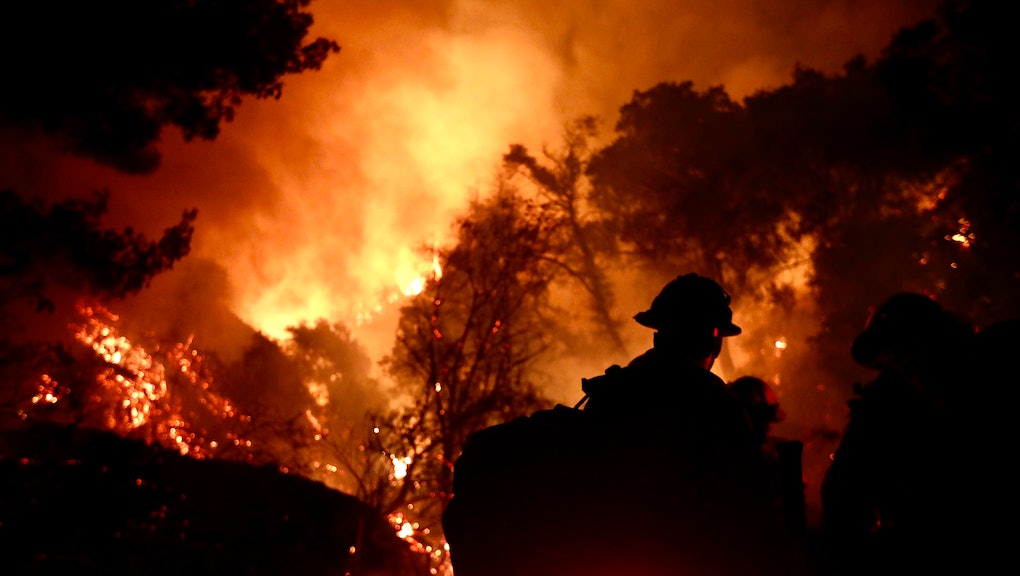 It doesn't really matter how the fires started, climate change made them worse

As fires continue to burn throughout California and across the West Coast, disinformation is also starting to spread. Late last week, conspiracy-minded individuals on social media started claiming that the fires destroying millions of acres of land and forcing hundreds of thousands of people to flee from their homes were actually the work of Antifa-backed arsonists.

The conspiracy theory was backed by Q, the supposed White House insider and titular character in the ongoing collective delusion known as QAnon. It also gained steam within slightly more mainstream voices. A sheriff’s deputy in Clackamas County, Oregon was caught on video claiming that the fires were started by "Antifa or other crazy left-wing people." Fox News host Laura Ingraham made the claim on cable news airwaves Monday that Antifa was intentionally setting fires throughout California. Paul Romero, Jr., a failed politician who has been bounced in Republican primaries from both Congressional and Senate races in the last two election cycles, happily picked up the cause and blamed Antifa for starting the fires. Russian state media, including RT, helped to push the theory along.

The claims have been debunked widely, by just about every source imaginable. The FBI said it investigated and found the claims to be untrue. Politifact rated the rumors that Antifa was responsible for setting the fires as false. Facebook took down posts promoting the false claims. Police in Oregon have said repeatedly that the rumors of Antifa's involvement in the spread of the fires are unproven and have even asked people to stop calling them with such reports, as conspiracy theorists have flooded emergency lines attempting to link the fires to leftist groups. But the rumors have still spread, and have put people in significant danger. Some residents have refused to leave their homes despite being in the path of the uncontrolled blaze, insisting that they will stay behind and fend off extremists who aren't actually there.

Similar conspiracy theories arose in Australia after the country experienced one of the worst bushfires that it had ever seen, and those theories were propped up by similar conservative and far-right voices who are now pushing the mirrored narrative in the US while the West Coast still burns. One of the reasons these theories crop up is to counter the claims that climate change has played a major role in the spread of these fires, as if proving that the fires were set by a particular group or person would negate the conditions that have allowed the fires to burn out of control.

The simple fact is that it doesn't matter how the fires started. Once the spark is set and the flames get fanned, it is set free in a world that has already been ravaged by climate change, creating conditions that not only allow more wildfires to form but to spread at rates that are incredibly difficult to contain. "The origins of this summer’s fires, many of which have been sparked by lightning, are immaterial," Char Miller, director of the Environmental Analysis Program and W.M. Keck Professor of Environmental Analysis at Pomona College, tells Mic. "It's as immaterial that the past decade of wildland fires often had as their sources broken high-voltage wires, utility substations sparking, and, in some cases, arson." Miller explains that once the fire is lit, it responds to environmental conditions and human geography, both of which have come together to create the devastating effects that are being experienced across the West Coast.

""It's important to emphasize that all wildfires result from a combination of multiple conditions. There's never been a wildfire without ignition," says Noah Diffenbaugh, a climate scientist at Stanford University and the Kara J Foundation Professor of Earth System Science and Kimmelman Family Senior Fellow at the Stanford Woods Institute for the Environment. "There's never been a wildfire without fuel. There has never been a home destroyed by wildfire without human settlement." Diffenbaugh notes that humans have historically been the leading cause of wildfires in California, and that at least some of this year's devastating fires have been the result of human activity.

Typically, the fires that occur from human behavior are not intentional or malicious. The El Dorado Wildfire, which has destroyed thousands of acres in California, resulted from a gender reveal party gone horribly wrong.

Think of it this way: the Sonoran and Chihuahuan deserts are moving north, and no border wall, no matter how beautiful, will stop this. - Char Miller

That is not to say that there aren’t instances of intentionally lit flames or arson attempts. These do happen. In fact, CAL Fire reports that one out of every five wildfires in the state since 2007 was an arson fire. But regardless of who or what may be responsible for setting the spark, it's the increasingly dry conditions caused by the rising global temperature that enables these fires to spread faster, burn longer, and cause more damage than at any other time in recorded history.

According to Diffenbaugh, the Western United States has seen the area burned by wildfires increase approximately tenfold over the last four decades. "Careful, hypothesis driven analysis suggests that around half of that increase is attributable to long-term warming, as the effect of warming on the dryness of vegetation," he says. Earlier this year, Diffenbaugh helped author a research paper that found climate change has increased the likelihood of extreme wildfire conditions across California. The study found that the frequency of extreme wildfire weather days has doubled in California over the past four decades. "That is primarily the result of this increasing fuel aridity from long-term warming," he explains.

"We have very clear evidence that global warming is increasing the flammability of fuels, which increases the risk of large, disruptive wildfires when there is ignition and when the other conditions for wildfire come together," Diffenbaugh says. He explains that those conditions have enabled what has been one of the worst summers on record for California in terms of wildfire destruction. "We have by far the most area burned of any year in modern history. We have the largest, third largest, and fourth largest wildfires that have burned in the last month. We have had four of the eight largest and five of the 15 largest fires [in state history]."

Miller likewise concluded that once the flames have been started, regardless of origin, it is the conditions set by climate change that allow them to spread. "Climate Change has a formative role to play in the wildfires of this summer and those that have preceded it," he says, noting that the warming temperatures and dry conditions on the ground are expected to continue for the rest of the century. The situation will likely shift the landscape of California. "We can expect an intensification of wildfires across that time that in some cases will lead to land conversions from forest to grassland to semi-arid and arid desert-like conditions," he says. "Think of it this way: the Sonoran and Chihuahuan deserts are moving north, and no border wall, no matter how beautiful, will stop this."

There are some tools that can help manage these fires. "Forestry practices and control burning practices that can reduce wildfire risk through vegetation management," Diffenbaugh says. He also mentioned hardening the electrical grid to reduce the risk of sparks and expanding the existing firefighting infrastructure, in terms of both personnel and equipment. But even careful and mindful management and regulation will only help to mitigate some of the risk. In the long term, addressing climate change and the increasing global temperature is necessary. Otherwise, the conditions that enable these wildfires will continue to exist. And as Miller notes, "lightning fire burns every bit as hot as a blaze touched off when a high-voltage wire snaps, or when a car sparks, or an arsonist tosses an incendiary device."

Correction 9/15: Due to an editing error, an earlier version of this article attributed a quote from Char Miller to Noah Diffenbaugh.

More like this
What cities will be most affected by climate change?
By Vanessa Taylor
Google Earth's new Timelapse feature is a rude awakening for climate skeptics
By AJ Dellinger
"Brood X," a plague-level cicada infestation, is coming for us this spring
By Rafi Schwartz
Stay up to date