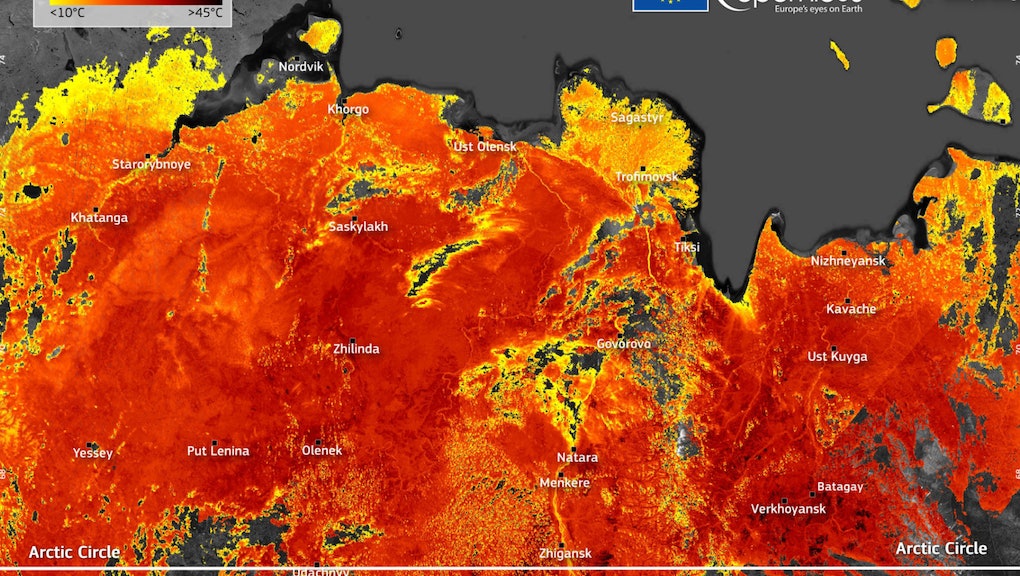 It's 118 degrees in the Arctic, which sure seems bad

A heat wave is sweeping across the southwestern United States at the moment, but it's not the only place on the planet feeling some extremely hot temperatures. According to satellite images taken by the European Union, it appears that surface temperatures have reached 118 degrees in Siberia. Yes, that Siberia.

The blistering 118-degree temperature occurred on the ground in Verkhojansk, a small town in Eastern Siberia. It wasn't alone in experiencing astonishingly hot weather. According to the satellite data recorded by the European Space Agency’s Copernicus Sentinel satellites, Govorovo experienced ground temperatures of 109 degrees, while Saskylah reached 98.6 degrees during the heat wave. According to Earther, it's the hottest the region has been since 1936.

Siberia is simply not supposed to be this hot. The typically frozen part of Russia is home to permafrost that is a significant storer of carbon and other emissions. As that frost thaws, it releases the greenhouse gases that it had previously trapped, often for tens of thousands of years. Those gases get caught in the Earth's atmosphere and contribute to the planet's warming — which is only going to make the temperature situation worse. It can also result in more immediate damage: Last year, Siberia experienced a sudden spate of craters appearing in the ground. Scientists theorize that the release of gas that was stored in the region's frozen tundra is the most likely culprit for the sudden and significant dents in the planet's surface.

This is the second year in a row that Siberia has experienced some concerning heat. Last year, the region saw temperatures climb as high as 40 degrees above their annual averages, leading to melting snow cover and ice, as well as damage to permafrost. Scientists studied that seemingly anomalous event and determined that it was made 600 times more likely thanks to climate change.

Siberia isn't the only place on the planet that is experiencing unexpected warming. Last year, scientists warned that the South Pole was warming at a rate three times faster than the global average. That isn't good! We might not be feeling the effects that the heat has on these remote locations now, but trust that if they continue warming and ice continues melting, the impact will be noticeable. Global warming may not happen evenly, but it will be felt everywhere.