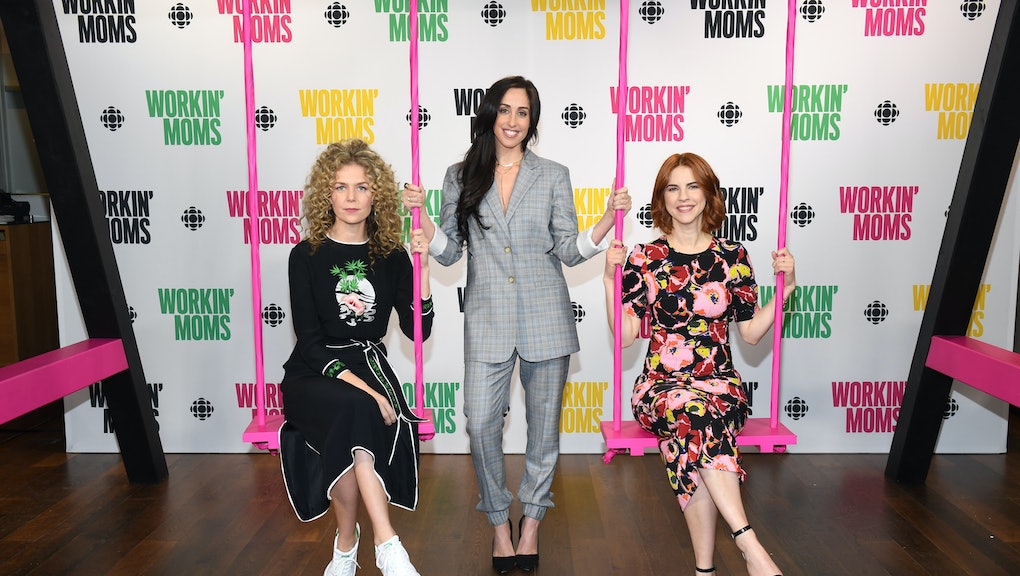 It's no secret that women are under represented, well everywhere. Or when women are represented, it's through the lens of a man, or geared towards the male gaze. For the last 15 years or so during the television renaissance — the time in which TV programs have shifted from cheap entertainment to eat dinner with your parents to, to a medium just as respected and finessed as film — we've seen a lot of dark male characters capturing the cult fandom of audiences. But with the recent success of shows like Flack, Good Girls and Working Moms, we're finally seeing an equal adoration of the female antihero.

With fanatically beloved male antihero characters like Tony Soprano of The Sopranos, Omar Little of The Wire, Jax Teller of Sons of Anarchy, Walter White of Breaking Bad, Don Draper of Mad Men, Dexter Morgan of Dexter, Chuck Rhoades of Billions, Marty Byrde of Ozark, the trope of the male antihero is in no way new and the list could go on. These characters suck the viewer in and create cult fandoms that have spanned way beyond the lives of the shows they were on. And in most of these shows, the women are just foils for their male counterparts' bad behavior, a pretty thing to give us the reaction to the toxicity.

Before we get into the fresh crop of female antiheros making the screen vibrant right now though, we must pay homage to one Nancy Botwin of Weeds, played by the infallible Mary Louise Parker. I would argue Nancy was the first dark female character to lead an ensemble cast for such a highly-rated and long-running show, where her darkness was almost its own member of the ensemble. It was one of the first times on popular television that we saw a woman operating on her impulses just like a man would. She wanted power, money and sex and she did what she had to do, often putting her family in danger, to get them. That's a commonplace trope for a male character, but when Nancy Botwin did it it made for revolutionary, captivating television.

Building off the Botwin momentum, this spring/summer has delivered us new seasons of shows that are finally getting the popularity they deserve — not despite, but because women are at the center. Shows like Flack, Good Girls and Workin' Moms all depict women living authentic, messy lives and doesn’t judge them for it. We're at a new dawn of shows representing women honestly, but without it being gimmicky and exploitative.

In the past, we've seen female characters often forced into one of two categories: those who are trying to attain success in business and/or find love like in Grace and Frankie, or those struggling with motherhood and drama that comes with being stay at home moms like in Desperate Housewives. You could argue that many of the women of Mad Men like Peggy Olsen, Joan Holloway and Betty Draper were a complex depiction of women on television, but they were still always there as a mirror for the men.

In Flack, a show about high-powered, big-balled PR women in London, men are almost nonexistent, except for the sputtering drugged out, hooker-addicted clients who always come to Anna Paquin's character of Robyn crying, desperate for help. Robyn, while being a mess who cannot keep friends or family near but can certainly keep pills and coke very near, is still always five steps ahead, always saving the day even if her morals are so highly stacked at the door, they're blocking it from being opened.

In Good Girls you see the motherhood archetype flipped on its head as a trio of two sisters played by Mae Whitman and Christina Hendricks, and their best friend played by Parks and Recreation's Retta, become so disillusioned by the working housewife roles they've been thrust into that they turn to crime. Their crimes escalate and find them quickly embedded in gang activity, but they truly want to keep doing it — and that's what is so captivating and real about the show. It's an escape from the patriarchy that got them down by sticking their metaphorical dicks where they shouldn't normally belong. They want risk, power and money, and like Nancy Botwin, put their families in danger to get it.

And then you have Canadian sleeper hit Workin' Moms, where the pace is always fast, the curse words stay flying, and the parenting decisions are questionable. Workin' Moms shows women who don't define themselves as mothers first just because they're mothers, or wives for that matter, but that doesn't mean that they're putting their careers first either. They put themselves first, even if it leaves them in hotel rooms making kid Halloween costumes out of pillow cases and toilet paper rolls. They lie to their husbands, business partners and even best friends. They have abortions and get postpartum depression after their second babies are born. They're human beings, not just moms or "female CEOS." They exist outside of stereotype.

All three of these impeccably binge-worthy shows depict women at their worst, but they’re the center of the show, and we’re rooting for them. Not in a Walter White way, but in a Don Draper kind of way—and I don’t think that’s been done on television very often for female characters. There are inklings of the trend in other shows. While being absolutely adored by fans, one could argue Schitt's Creek's Moira Rose is a boozy, egomaniac antihero with a secret heart of gold. Even Netflix's breakout mother daughter hit Ginny and Georgia saw the mother's character as a smart, hot grifter who wanted more than her abusive childhood afforded her, and didn't care what she had to do to get it. Hopefully this trend of seeing women portrayed on television as human beings outside of the archetype male television makers originally made for them is one we will see way more of in the future, and in the mean time — watch these brilliant shows.