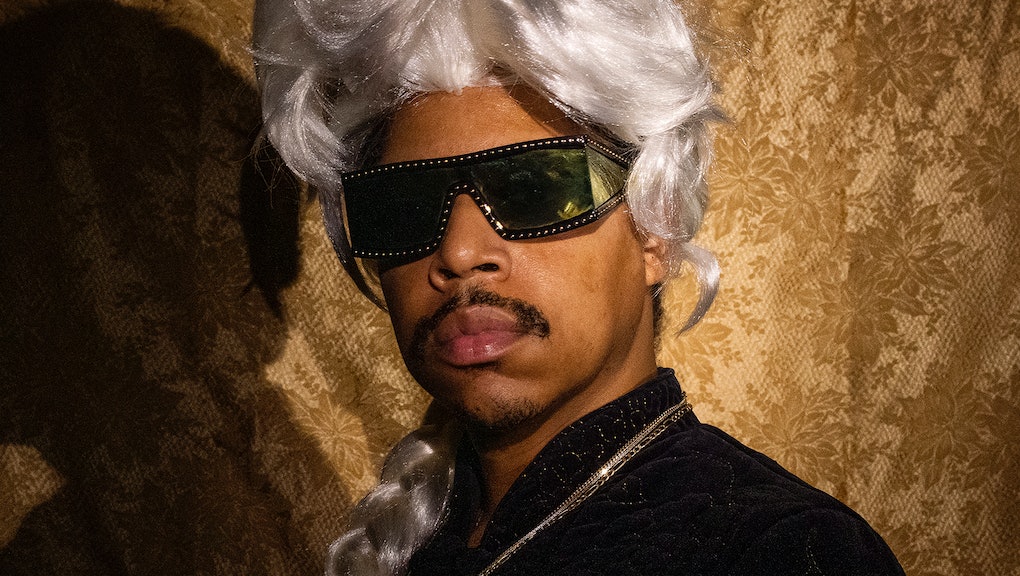 "It's yours — it's ours": The artist making literal space for Black joy

Yesterday, shortly before 11 a.m., a curious yet familiar image appeared on the MoMA PS1 Instagram. It was of Bob Ross, the instantly recognizable Joy of Painting host — but with a few twists. Where Ross’s mug would have been, the artist Azikiwe Mohammed had photoshopped his own. The painting on the easel, presumably a landscape of the “happy little” trees and mountains Ross was so fond of, had been swapped out with an ethereal swishing basketball foregrounding a rainbowed sky. The pièce de résistance: Ross’s famously permed ’fro and beard blended perfectly into Mohammed’s own.

“When I was trying to think of a person who really went out of their way to demystify and show all the secrets — there’s only one person that did it,” Mohammed, who is also a photographer and DJ, told me over the phone in the midst of his daylong takeover of the museum’s Instagram account. “People will say those paintings are corny or whatever, but a lot of the stuff that he was teaching was pretty heavy game!”

Remixing the joy of painting, while spilling the goods, is the idea behind the artist on the rise’s latest project, the Black Painters Academy, a tuition-free community art school for which he has so far raised $22,000 — the first year’s rent — on Kickstarter. The space will be in Manhattan’s Chinatown, but for now, due to the pandemic, classes will take place virtually. Mohammed, an art educator with 20 years’ experience, will teach, and he’s enlisted painters Dana Robinson, Curtis Talwst Santiago, Steve Locke, and Carlos Rosales-Silva to assist as guest instructors.

“I went to Black Painters Academy in Detroit when I was a kid,” Locke says in the Kickstarter video. “They didn’t call it that, but that’s what it was. I can’t overestimate the impact that had on me as a young artist.” He described having a “one-on-one experience with artworks and working with an artist” as “transformative” for him.

Classes will be free and first come, first serve. As Mohammed says in the Kickstarter video: “Black joy, experimentation, and leisure shouldn’t come at a cost, because we pay enough already.”

Black joy, experimentation, and leisure shouldn't come at a cost.

“I have no problem with giving away whatever secrets I have that I feel like are useful,” he elaborated over the phone.

The idea of scarcity, he believes, is where the problem comes from. “‘It’s like, ‘I gotta keep something for myself,’” he said. “No, I don’t. That is not true, that’s a lie, and that's wrong. That’s a demon that you have to fight, that everyday [nonsense] idea of not enough seats at the table. Build a longer table. Most tables come with leaves. Put that leaf in. Take it out of storage, come back, get the leaf, open it up, find a seat.”

Making room at the table for others, especially those who have historically been left out, is a core principle of his work. His celebrated ongoing performative installations, Jimmy’s Thrift of New Davonhaime, take the form of a colorful thrift store populated with tapestries, records, postcards, paintings, lamps, and books, along with donated photos and audio recordings made by visitors. (Mohammed plays Jimmy, the shop’s affable proprietor.) The exhibition was created to “serve as a safe space for Black and Brown people living in America,” according to the press materials. Claudia Rankine, the noted essayist and poet, called the work “revolutionary” in an interview with him for Artforum, citing his “ability to give up control and democratize both space and process.” During the research phase, he spent two and a half weeks visiting the five American cities with the densest Black populations — New Orleans, Detroit, Jackson, Birmingham, and Savannah (New Davonhaime, a place Mohammed conceived of, is a portmanteau of their names) — and interviewing residents about their issues. “What’s wrong?” he would ask. Most of the responses, he told Rankine, were “pretty simple: ‘I don’t see enough of myself out there, and the versions I do see I’m not happy with.’” For the third iteration of Jimmy’s Thrift of New Davonhaime — at the Knockdown Center in Queens — he set up a photography studio, offering to take impromptu portraits of “whoever needed to see themselves.”

“I know he’s gotten in situations where people come back multiple times and are like, ‘We want to do it this way this time or we want to include this person,” and he’s always like, ‘Yeah, let’s do it,’” said Alison Kuo, an artist and friend of Mohammed’s, whom he invited to perform at the Knockdown Center show.

Though the series was characterized by some in the press as a “utopia” (or perhaps utopia-adjacent), he cautioned against viewing it, or the Black Painters Academy, as such.

“Safe space doesn’t exist if we can be killed outside in the street; if they can knock down the doors to our houses and come inside and kill us inside also,” he said. “There is no space that’s safe.”

The idea that you can have a space that lets you drop your guard is ideal.

Even artist profiles can serve as occasions for threat. Earlier this year, while speaking in Harlem to Arden Fanning Andrews, a journalist from artnet News, a cop pulled up beside him and he “paused, exhaled, and admitted it was ‘always terrifying’ to see the police, even without a pointed interaction,” wrote Andrews.

“It’s not wise, when your skin is brown, to not look around,” stressed Mohammed, who was born and raised in the Tribeca neighborhood of Manhattan and whose studio is in Jersey City. “The idea that you can have a space that lets you drop your guard is ideal.”

He believes the timing of the Black Painters Academy makes sense for him, as a painter and educator, and the art world more broadly.

“But what about the hundreds of others?” he asked. “Everybody’s looking now for the next big thing, so let’s give them some. You want some? Here. Here’s a building where there’s always going to be some,” he said. “Brown folk have been told no for so long. Maybe this can help be a yes. If we’re able to make circumstances that say yes, then the no’s aren’t gonna sting as bad.”

“Azikiwe’s an artist that I really believe in,” said Kuo, who works as an arts residency manager at the International Studio and Curatorial Program (ISCP) in Brooklyn. The two met in 2016 as fellow participants in the Beverly’s exhibition at the Material Art Fair in Mexico City, where they became friends.

She described to me Beverly’s, a self-described “curatorial experimental” co-founded by fellow artist Leah Dixon, as “a little family and support system” for artists who have “very ambitious practices” outside the commercial art world and nonprofit molds, and who are focused on objects, paintings, and sculptures as well as community-based work — which certainly aligns with Mohammed’s practice. (The Beverly’s connection remains: The Black Painters Academy will be housed above its future gallery space.)

“I feel like, even though he’s not a current resident, talking up the artists that I love is my job,” said Kuo, laughing. “It’s a fragile ecosystem here. We really need artists like Azikiwe in order for the New York art scene to survive the pandemic. I see him as somebody who’s really trying to find ways to be create new models not just sustaining himself, but the whole ecosystem of artists and art workers.”

If I have a resource that I see is useful to whomever, then it's yours—it's ours.

It’s not just them he’s helping out. In mid-March, right before the city’s coronavirus shutdown, he obtained his driver’s license. He spent the next few weeks making contactless mutual-aid deliveries in his shared Honda Fit, picking things up and dropping them off. Some days he rode around for up to ten hours. At night he drove himself to the beach, “whichever beach was closest.”

“I felt like it was my job to try to use [my vehicle] as best as I could,” he said, matter-of-factly. “If I have a resource that I see is useful to whomever, then it’s yours—it’s ours. And that’s for anybody for asking.”