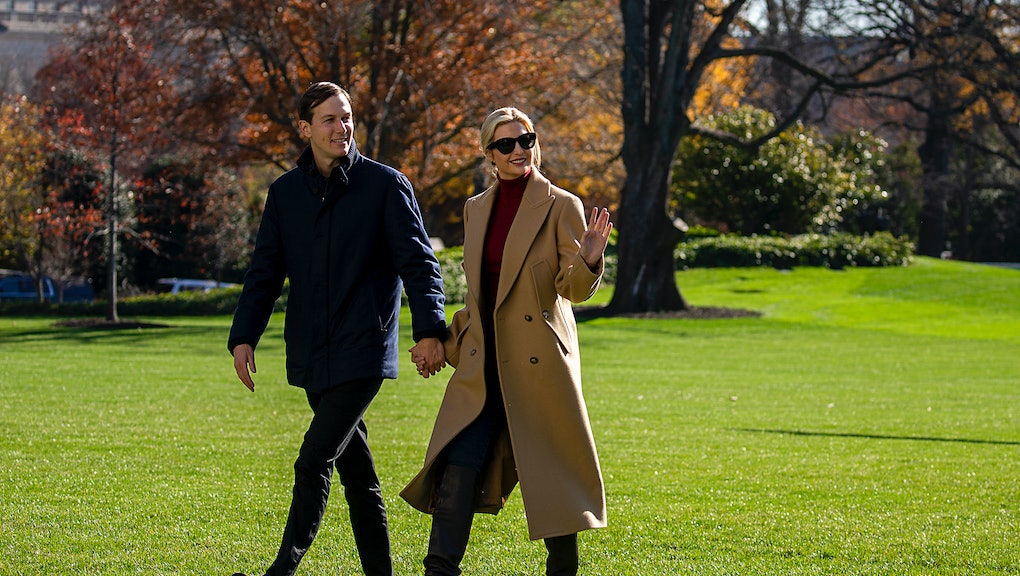 Ivanka Trump and Jared Kushner reportedly refused to let the Secret Service use any of their 6.5 bathrooms

There's been a lot of ink spilled (or keyboards clicked, or whatever cliched metaphor you wanna go with) lately about first daughter and super-duper-serious White House employee Ivanka Trump's desire to salvage what's left of her understandably terrible reputation in hopes of enjoying some sort of nebulous political career at some nebulous future date.

But despite her efforts to maintain some semblance of aloof professionalism over the past four years, Trump's electoral fortunes look worse and worse in these waning days of daddy Donald's administration, as he heads out the White House doors and into the annals of history as the first president to be impeached twice. Which is why I'm able to share the following sentence — one which I am both thrilled and terrified to type:

If Ivanka runs for office and loses, it will be — at least in part — thanks to her selfish toilet hoarding.

Allow me to explain.

On Thursday, The Washington Post reported that the U.S. Secret Service detail assigned to protect Trump, her husband Jared Kushner, and their family, has spent around $100,000 renting a pricy studio apartment near the couple's D.C. area home for the sole purpose of pooping. If you need a moment to fully absorb that piece of information, I completely understand.

While the White House has denied it, and the Secret Service pointedly refused to comment, the Post spoke with "a law enforcement official familiar with the situation" who claimed the family's Secret Service detail was specifically told to stay out of the Kushners' home, with its six and a half bathrooms. Instead, agents were forced to use outdoor porta-potties (neighbors eventually complained about the structures, which blocked the residential neighborhood's sidewalk, prompting the Secret Service to ultimately abandon the potties) as well as the indoor bathrooms of Kushner neighbor and former President Barack Obama. Agents allegedly even resorted to driving to Vice President Mike Pence's home a considerable ways away in order to use the toilet there.

The Obamas did not use the garage, so the extra traffic to and from the command post caused no problem. Yet this solution, too, was short-lived after a Secret Service supervisor from the Trump/Kushner detail left an unpleasant mess in the Obama bathroom at some point before the fall of 2017, according to a person briefed on the event. That prompted the leaders of the Obama detail to ban the agents up the street from ever returning.

Please, try to imagine the conversation that took place between the former president of the United States and the head of his Secret Service detail, in which the latter had to explain why he was banning his own coworkers from pooping on the property.

Eventually, after relying on the septic hospitality of the Kushners' other neighbors and nearby restaurants, the family's protective detail finally settled on renting an 840-square-foot basement apartment across the street from the Kushners for their various biological necessities.

"I think it was very clear that they just needed a place to take a shower, take a break, use the facilities, have lunch," apartment owner Kay Kendall told the Post. "I’m happy to be able to have helped them."

Since renting the apartment in 2017 through the lease's expiration this coming September, the Post estimates the Secret Service will have spent $140,000 in total to, as Kendall put it, "use the facilities."

Which leads me back to the first daughter's potential political future.

Trump has, as I mentioned, carefully cultivated an image of herself as being above the various scandals and embarrassments that have come to define her father-boss's administration. She would like to be seen as a simple public servant, dedicated to the greater good of the country, who has earned her White House portfolio thanks to a lifetime of hard work and success — and not because she is an entitled, silver-spoon fed nepotista whose father hired her and her husband despite plenty of other, better options.

If she does run for office, that perception — one of unearned privilege and detachment from the needs of those not fortunate enough to be born into unimaginable wealth — will be one of the chief hurdles she'll need to overcome to win. (Another would be: Her father helped foment an insurrection that left multiple people dead at the U.S. Capitol.) Refusing to allow the ass cheeks of the people whose entire job is to make sure she stays alive to enter one of the six bathrooms in her home plays right into that perception. Remember, this is someone who could pay to buy and install a new toilet at the end of every day for the entirety of her father's term without noticing a dent in her bank account, but instead forced the Secret Service to spend more money than most people make in a year just to rent a studio apartment with indoor plumbing. It's hard to shake the impression that you don't really care about, well, anyone, when these are the stories that come out about your time in the uppermost echelons of American power.

So, yeah. Maybe Ivanka will run for office sometime in the future. For any number of reasons, I hope she doesn't. But if she does, and if she loses, I think it's safe to say that not letting her Secret Service agents take a dump in one of her six bathrooms probably had something to do with it.