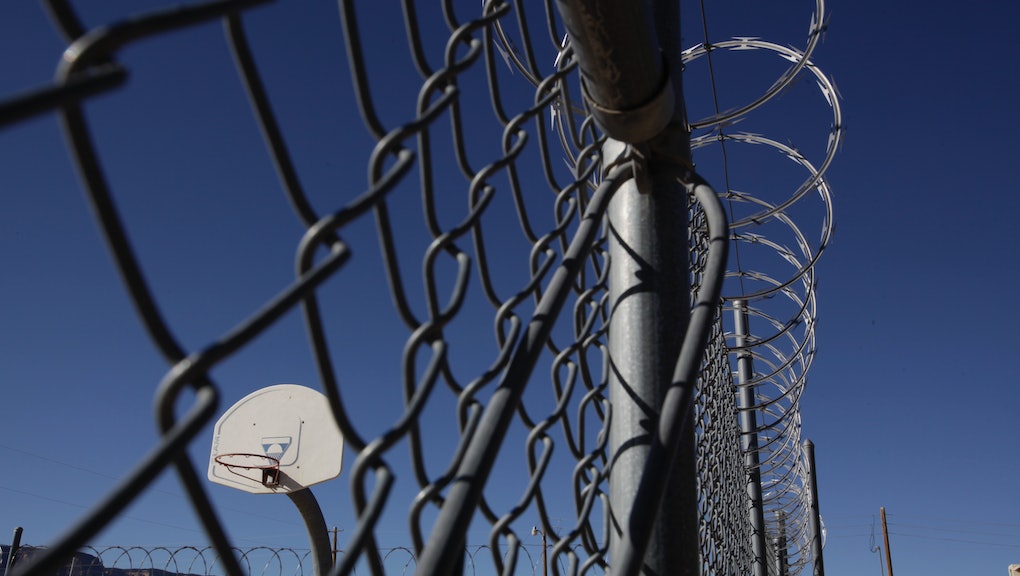 Coronavirus poses a heightened risk to those without access to proper sanitation measures, the ability to self-isolate, or the means to receive a diagnostic test and subsequent health care. That includes the substantial amount of incarcerated people in the U.S. Now, to curb the spread of coronavirus, some jails across the country are releasing people ahead of their scheduled re-entry date.

"Local officials’ responses have run the gamut," the Marshall Project reported, explaining that county officials — including sheriff's offices, public defenders, district attorneys, and prosecutors — are working together at unprecedented speeds to come up with ways to reduce risk of exposure for those who are incarcerated. The efforts include releasing non-violent offenders, releasing elderly prisoners, halting new criminal proceedings, and declining to prosecute any new cases.

In Los Angeles, the county with the largest jail system in the country, nearly 17,000 people are "caged in brutal conditions, without adequate access to medical care or basic hygiene needs, like soap and water," advocates Ivette Alé and Eunisses Hernandez wrote in an op-ed for Mic. "The jails currently operate at 136% capacity, exacerbating the spread of disease among an already medically vulnerable population."

In order to curb the spread of coronavirus in its jails, public information officer Deputy Ed Luna tells Mic that as of March 23, LA County has released 1,700 individuals who are "low-level offenders," in other words those convicted of non-violent offendses who have 30 days or less left to serve on their sentence. Luna says that this is a precautionary measure, as there are no reports of an individual in the county's jail testing positive for COVID-19.

While county-level changes have the ability to impact local populations, New Jersey said earlier this week that it would begin statewide operations to release jailed individuals, acknowledging the "profound risk posed to people in correctional facilities" by the spread of coronavirus. Anyone serving a county jail sentence as a "condition of probation" or because of a "municipal court conviction" is eligible for release.

The state's order, according to The New York Times, came after weekend hearings regarding the potential public health impact of not taking swift action and could lead to the release of nearly 1,000 people. Gurbir Grewal, the New Jersey attorney general, said that coronavirus is "the most significant public health emergency in our state’s history."

But not all states have been as responsive. Advocates in New York have been calling for the release of prisoners who are immunocompromised, elderly, and or serving based on low-level convictions from Rikers Island jail, which is notorious for its poor conditions and overcrowding. Last week, Ross MacDonald, the Rikers Island chief physician, wrote starkly of the jail's unpreparedness for a coronavirus outbreak in a tweet: "We cannot socially distance dozens of elderly men living in a dorm, sharing a bathroom. Think of a cruise ship recklessly boarding more passengers each day." This week, there have been 52 cases of coronavirus reported at Rikers.

The work to release incarcerated folks is slow-moving in New York. A judge charged with overseeing Rikers releases approved 87 cases, but as of Monday morning, only 23 people had been freed. The NYC Board of Corrections, a civilian oversight body, published a letter on March 21 detailing the potential risk and the efforts New York City Mayor Bill de Blasio (D) could take to release vulnerable people or those detained for administrative reasons. Both de Blasio and New York Gov. Andrew Cuomo (D) have yet to offer guidance that would quickly address the ballooning crisis inside state jails.

Cuyahoga County, Ohio, home to the city of Cleveland, was actually one of the first counties to announce an effort to release people from jails in order to halt the spread of coronavirus. In its first week, the county released 700 individuals — over one-third of its total incarcerated population.

According to The Associated Press, Cuyahoga County judge Brendan Sheehan felt that releasing jailed individuals was crucial to public health. As Sheehan told AP: "We feel it’s not if this pandemic hits, but when it hits our jail."