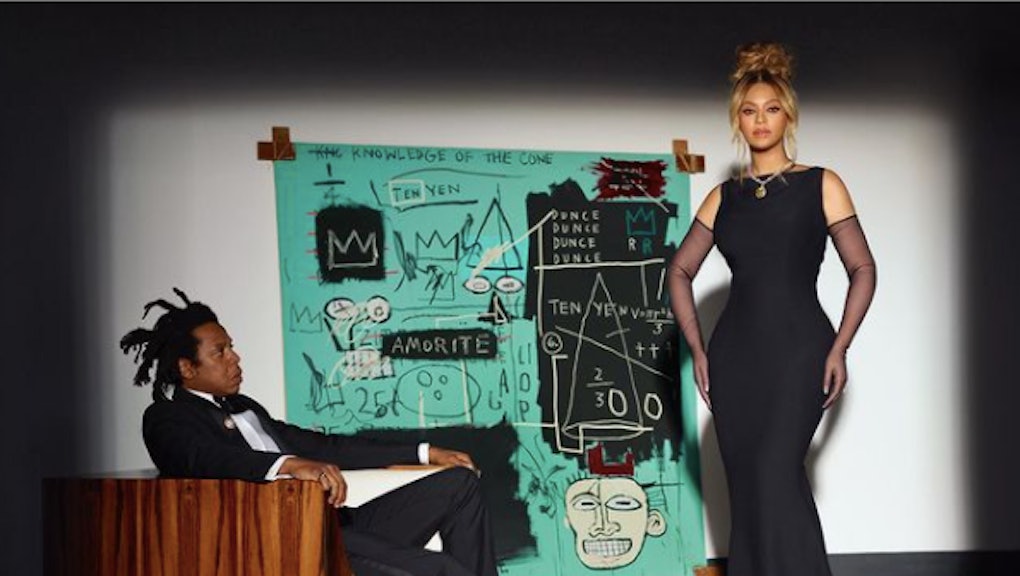 Jay-Z and Beyonce are too rich to not make history and controversy at the same time. As part of luxury jeweler Tiffany & Co's "ABOUT LOVE" campaign, Jay-Z and Beyonce pose in front of a never-before-seen painting from Jean-Michel Basquiat's private collection, a decision that is as historic as it is controversial.

The Carters were announced today as the stars of Tiffany & Co's "ABOUT LOVE" ad campaign, which came with photos of the billionaire couple spread to the world from one of the most sacred places in all of the internet: Beyonce's Instagram. Beyonce becomes the first Black woman in Tiffany & Co's 184-year history to wear the prestigious 128.54 "Tiffany Diamond," the "ABOUT LOVE" is the married couple's first ever ad campaign together, and the campaign is another example of Beyonce and Jay-Z's penchant for decadent, aspirational Black love. Unfortunately, it's not that simple.

Basquiat's 1982 painting “Equals Pi" was purchased by Tiffany from a private collector, a partly unsettling fact given how Basquiat's paintings have been selling for record prices with his estate seemingly not receiving any money from these sales. Then there's the fact it's being used in an ad campaign essentially for the purpose of selling more Tiffany & Co diamonds. Jay-Z recently derided how the Basquiat family isn't receiving a slice of the genius sibling's work's value exploding from a painting going from $2,500 in the 1980s to $110 million in 2017. But, once you factor in these questionable caveats to the ABOUT LOVE campaign, a Black billionaire couple next to a Basquiat in a Tiffany & Co's ad appears less like Black excellence and more like Black billionaires enriching themselves even more by allowing a white-owned company to co-opt Black art. This contention gains credence with Tiffany's explanation of why Basquiat's one-of-a-kind painting is included in the ad.

In an interview with Women’s Wear Daily, Alexandre Arnault, Tiffany’s executive vice president of products and communications, explained while the company has no written evidence of Basquiat making the painting for Tiffany, the company believes it was the inspiration because of how closely the blue in the painting matches the famous "Tiffany Blue," the original color for Tiffany's jewelry dating back to 1845. "We know he loved New York, and that he loved luxury and he loved jewelry. My guess is that the [blue painting] is not by chance. The color is so specific that it has to be some kind of homage," Arnault said.

A white-owned company justifying using one of the rarest paintings from one of the most beloved Black painters because of a shade of blue he used sounds like the wealthy distorting the truth to reconcile their greed with the desire for public acceptance. Arnault mentioned how the company knows the Basquiat family, but made no mention on how his family will benefit from this clear commercialization of a piece of art from his private collection. Jay-Z and Beyonce working in close collaboration with Tiffany & Co for this campaign should give the jewelry empire some benefit of the doubt, but reaffirms the disconnect the wealthy has with the general public.

You don't reach $1 billion without a macro view of society wherein moral compromises are merely small concessions for a grander vision. Jay-Z's Roc Nation partnered with the NFL to help advise on artist selection for major NFL events like the Super Bowl while the NFL effectively blackballed Colin Kaepernick and enacted rules to suppress on-field protests. Jay-Z's billionaire rationale was big picture: "With its global reach, the National Football League has the platform and opportunity to inspire change across the country," he said in a statement announcing the partnership. He went as far as to say the partnership had the potential to "strengthen the fabric of communities across America," a statement so unrealistically grandiose it could only come from someone rich enough to afford being divorced from reality.

Beyonce and Jay-Z aren't inherently bad people, quite the opposite. As part of the "ABOUT LOVE" campaign, Tiffany & Co is "pledging a $2 million commitment towards scholarship and internship programs for Historically Black Colleges and Universities (HBCUs)," according to a statement for the announcement, a move that mirrors elements of Jay and Bey's prior philanthropy. But, similar to the small wins the NFL's “Inspire Change” initiative has yielded, Tiffany & Co's altruism comes off as public relations spin to preclude any accusations of cultural appropriation via the use of Basquiat's work.