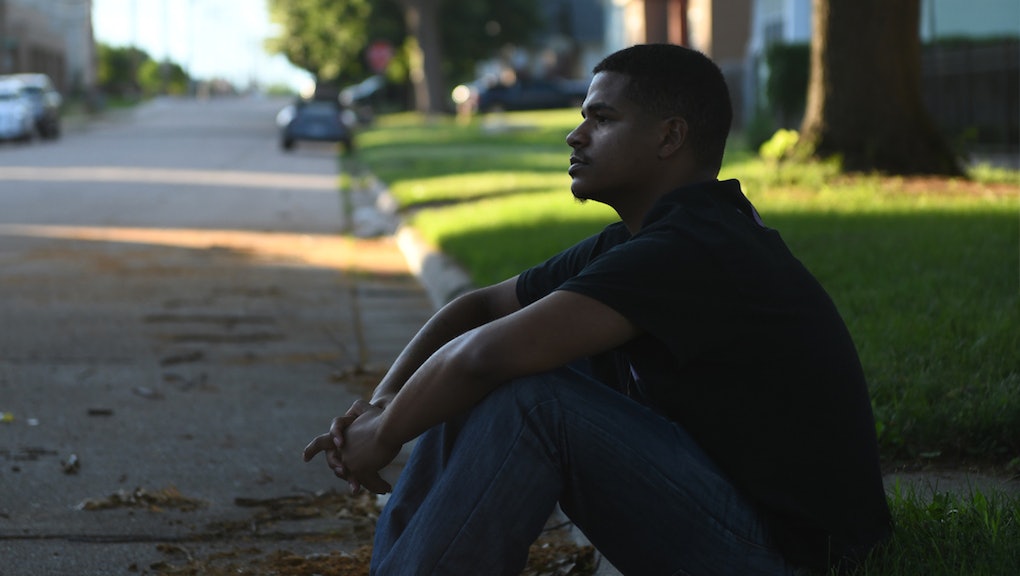 J.Cole-produced documentary 'Out of Omaha' is a harrowing look at surviving systemic racism

Dead in the middle of America, the state of Nebraska sits landlocked on all sides. Trapped within its flat terrains and borders is a deep and overlooked history of violence and white supremacy — particularly in the city of Omaha. It is also the birthplace of Black revolutionary Malcolm X, who began the first words of his famous autobiography with a harrowing account of his hometown’s racism. “When my mother was pregnant with me, as she told me later, a party of hooded Klu Klux Klan riders galloped up to our home in Omaha, Nebraska, one night. Surrounding the house, dishing shotguns and rifles, they shouted for my father to come out,” X wrote. Over 85 years later, the stench of racism still lingers throughout North Omaha.

In Out of Omaha, a film directed by Clay Tweel and executive produced by J. Cole’s Dreamville, bright and kind-hearted twins Darrell and Darcell Trotter find it hard to escape both the hard North Omaha streets and daunting generational trauma. The film follows the brothers from the ages of 19 to 25 as they grow through a series of both painful and endearing circumstances. But in order to perceive the depth of the brothers’ life challenges and breakthroughs, it’s crucial to understand how their North Omaha environment came to be.

The beginning of the film breaks down the city’s demise starting in the early 20th century, with experts and archival footage explaining North Omaha’s past. In the early 1900s, Black people in Omaha were legally confined to a segregated part of town and only able to live and purchase a property on the north side. Decades of racial violence, unjust policy-making, and police killings followed and, in the summer of 1966, Black people expressed their pain with the North Omaha riots. Similar riots would grip the area until 1968. The already marginalized region never recovered from the physical and economic ruin.

Now, over 50 years later, just 6-miles from Nebraska’s more affluent neighborhoods, it’s as if time continues to stand still. Stunted by laws that disproportionately impact Black people, leaving them with few options, North Omaha is where Darcelll and Darrell fight to come of age.

Out of Omaha is heavy and victorious, much like the twin’s uphill battles. Early on in the film, Darrell shows the audience his dim and tight spaced basement-turned-bedroom. He gives a small tour of his abode, admitting he’s not home much, which explains the heaps of unfolded clothes and clutter. He then flashes a blue bandana that represents his gang just before he shakes his head and says, “I don’t know man. That’s why I’m trying to get into school so I can get us up out of this shit here.” He says that he’s not an active member of the Crips and he’s trying to change his life.

It’s the first look at how he and his brother Darcell are grappling with two worlds. Darrell goes legit and attends school at the University of Nebraska through Avenue Scholars, a support program led by educators who’ve also faced similar obstacles in North Omaha. Although he’s struggling, his teachers believe in his potential. “My life ain’t perfect right now. I’m still living in poverty, everyday gets hard for me. I haven’t made it out all the way either. There’s times when the streets call me,” Darrell says during a class discussion. “I hate sitting around here with no money in my pocket and I’m tempted to just go out there and do what I was doing. But then, something just always pulls me back. I’m too close right now to go back to that.” Darcell is much more pensive and gutsy than his twin. In his earlier years, we learn, he doesn’t smile as much as him either. He struggles to carve out a real plan for his future, and although he admits he’s not interested in college, he understands the urgency of creating a better life.

Then, the first on-screen tragedy occurs: Darrell gets caught up in a robbery gone wrong. Darrell maintains his innocence, but despite his claims, he finds himself stuck in a unwinnable situation within the criminal justice system of Omaha. Tweel takes his time unfurling each step of this plummet. In one scene we witness Darrell, at age 19, watching his face on the news, shaking and sick from the terror.

At age 20, while Darrell is behind bars, Darcell makes the move to their estranged father’s place in Grand Island, a smaller more rural and mostly white town a few hours away. He finds a stable gig at a salvage store and does well at the job. He accredits his “hustling days” for strong grasp of sales. Darcell’s relocation to Grand Island turns out to be a godsend for his twin, who moves there instead of North Omaha once he finishes his 4-month stint in jail.

What would it be like if they each could bask in light-filled moments without a lingering threat or presence of heaviness?

Throughout the film, Darcell comes into focus appearing a bit more distant and pensive than his twin — his pain sits closer to the surface. In a car scene, J. Cole’s song “Neighbors” plays as he cruises alone through his new far-out town. Darcell reveals that he left North Omaha after a gun jam saved him from making an irreversible decision. “I almost killed somebody,” he reveals. A close cousin had come to tell him that a man had beat her, so Darcell went out looking for revenge. That kind of uncanny divine order steps in each time the brothers hit a wall. As each year goes by, it feels like the universe is playing a series of cruel jokes on the twins and their loved ones. And each time, at the very last minute before it all falls down, the two of them are given another chance, or reminded of their redemption.

Nothing seems to happen quickly or overnight in their lives, except for hard times. There’s so much waiting — for verdicts, shift ends, due dates, and breakthroughs. And when blessings like fatherhood, new jobs, and freedom arrive, they still require either or both of the twins to work hard. What would it be like if they each could bask in light-filled moments without a lingering threat or presence of heaviness? Survival mode makes it almost impossible to see both the present and future clearly and time feels reduced to fleeting moments. Tweel’s decision to follow them closely at such formative ages humanizes their experiences and does a beautiful job of supporting and revealing their tenderness as they go on. With each pull backward, Darcell and Darrell find the strength and collective energy to press forward. The story comes full circle when they use their combined experience and intellect to open a salvage store of their own.

For the brothers, pressing forward doesn’t mean abandoning their roots. In fact their neighborhoods, earlier days of stagnant grief, and loved ones who didn’t make it out, fuel their desire to reimagine their realities. As they reach their mid 20’s, we come to see that North Omaha, and all of its pain, has imbued Darrell and Darcell with the empathy, vision, and resilience to finish the dreams they’d imagined as eager boys at 19. In the closing of the documentary, they echo one another with a phrase that takes them back to those old days that seemed full of panic, but in retrospect carries a youthful innocence. "Reminiscing about how we used to chill, now we all grown up. Shit just got real."

Out of Omaha is available for streaming now on Starz.