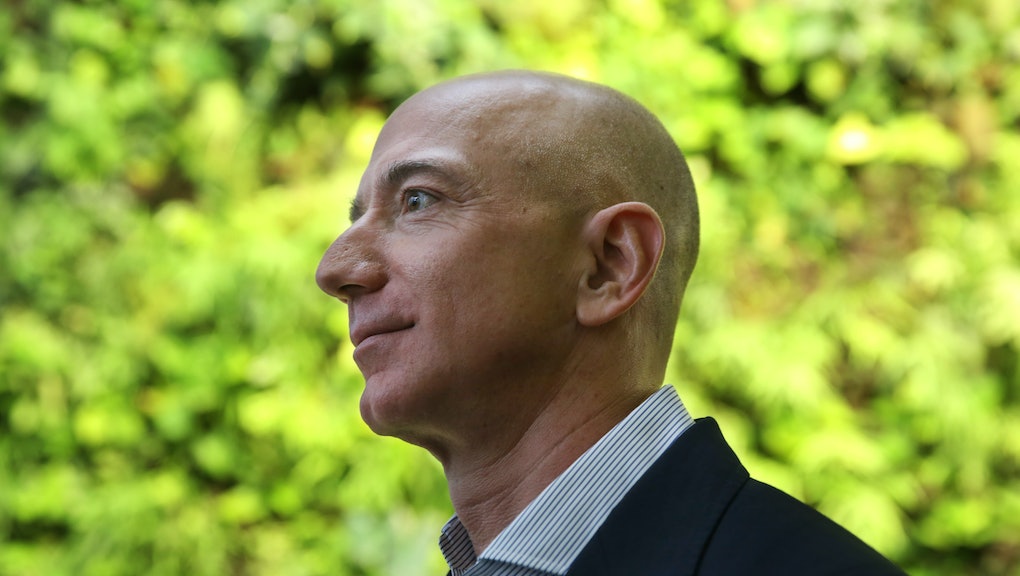 Jeff Bezos is going to space, which is the most divorced guy thing imaginable

At some point — perhaps while reading about the mistreatment of Amazon employees or dealing with the inconvenience of the company's inability to fulfill the promises of the service that you pay for — we've all wanted to fire Jeff Bezos into space. Technically, we are all about to get our wish. On Monday, Bezos announced that he will be on board for the first ever crewed flight of New Shepard, a rocket built by his partially taxpayer-funded space company, Blue Origin.

Bezos, along with his younger brother, Mark, will take part in the mission. The flight has been the subject of an ongoing bidding war after Blue Origins announced that it would auction off a seat on the mission. Currently, the top bid sits at $2.8 million, though that was before it was known that Bezos would be on board.

In the end, Bezos, his brother, another rich person, and a trained crew of professionals who have spent the majority of their lives preparing to go space only to have their landmark trip hijacked by a bunch of rich interlopers, are scheduled to make their trip to the edges of the atmosphere on July 20. The six-person trip will last just 11 minutes in total and will take the passengers more than 60 miles above the surface of the planet. Those on board will experience up to 3 Gs of force during launch and up to 5.5 Gs during their descent back to Earth, about the equivalent of what the average rollercoaster produces.

This journey has probably been a long time coming for Bezos, who has sold off chunks of Amazon stock to get the upstart space company off the ground. "Ever since I was 5 years old, I've dreamed of traveling to space," Bezos wrote in an Instagram post. "On July 20, I will take that journey with my brother. The greatest adventure, with my best friend."

At this point in Bezos's life — still relatively fresh off a split with his long-time partner MacKenzie Scott and an even fresher decoupling with his true love, Amazon — it is impossible to ignore the very divorce guy energy of it all. Bezos, with his bomber jackets and weirdly jacked body, is just out here getting at it with his boys. It's almost relatable, except for the fact that he's getting on a spaceship that he paid to have designed and develop with his unfathomably large pile of cash.

Of course, it's next to impossible to ignore the Amazon of it all in this situation. While Bezos slowly emptied the coffers of company stock to build Blue Origin, it's worth remembering that Amazon has spent year after year paying next to nothing or actually nothing in federal taxes while growing to become one of the most valuable companies in the world, benefitting from loads of taxpayer subsidies along the way. In recent years, the company has also raked in hundreds of millions of dollars in government funding via contracts from NASA, and is in line to score a $10 billion bailout from the Senate to stay in the race to put astronauts on the moon again.

So, congratulations: Your money fired Jeff Bezos into space. Sorry that this is probably not what you had in mind.