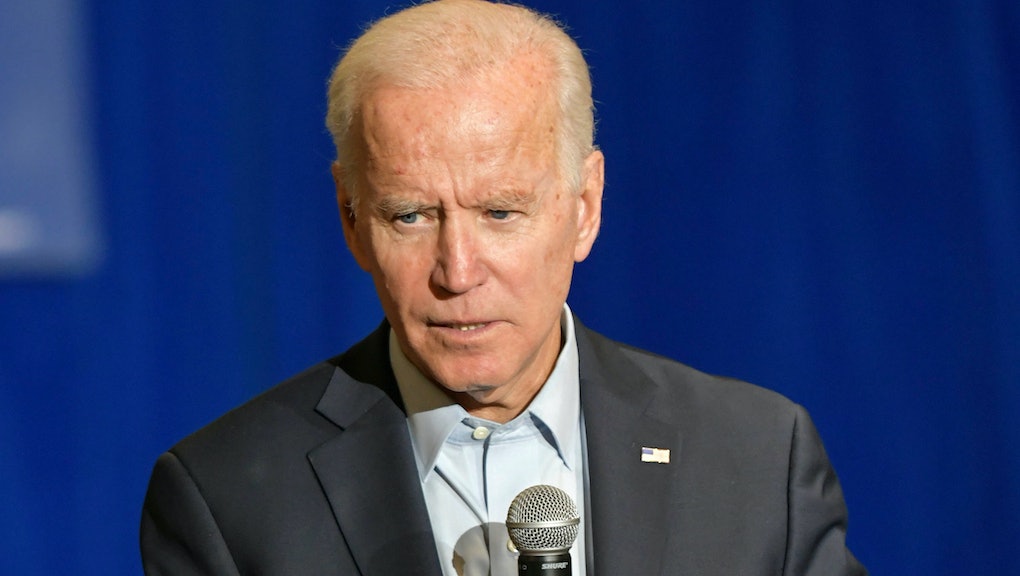 Joe Biden wants to 'debate' weed, not legalize it

Joe Biden won’t be immediately legalizing marijuana if he wins the presidency. On Sunday, speaking at a town hall in Las Vegas, the former vice president said that there is not “enough evidence” on “whether or not it is a gateway drug” for him to endorse legalization. “It’s a debate, and I want a lot more before I legalize it nationally,” he said. “I want to make sure we know a lot more about the science behind it.”

Biden isn’t coming out against the drug entirely: He supports medical marijuana, and he doesn’t think that possession should be a crime. But on the federal level, he doesn’t feel comfortable with a blanket legalization. Instead, he said, “states should be able to make a judgment to legalize marijuana."

Several of Biden’s rivals, including progressive Sens. Elizabeth Warren (Mass.) and Bernie Sanders (Vt.), have endorsed marijuana legalization. Biden appears to be attempting to position himself within the Democratic primary as the moderate, sober voice of reason on the issue. But unlike other issues that may be more of an electoral gamble, like Medicare-for-All or decriminalizing illegal immigration, Biden’s centrist stance actually puts him on the fringe of drug policy, politically speaking: More than two-thirds of Americans have supported full legalization for the past two years, according to Gallup. Among Democrats, the number is even higher — 76% support legalization, compared to 51% of Republicans.

Biden's stance on weed was pilloried by some of his more progressive peers, like erstwhile New York gubernatorial candidate Cynthia Nixon:

Marijuana legalization is an issue that could be an easy win for the eventual Democratic nominee, if they so choose. It’s popular, simple to explain, and intersects with other important criminal justice goals, like reducing mass incarceration. Many states, including California, Colorado, and Michigan, have already overwhelmingly passed legalization laws — and used the tax dollars to pay for popular priorities like education.

Biden, still the frontrunner in the Democratic race, may yet be able to eke out a win in the primary even as his lead has steadily declined. After all, some of his reflexively moderate policies do translate well to popularity among the general population. His stance on weed, however, is not among them.