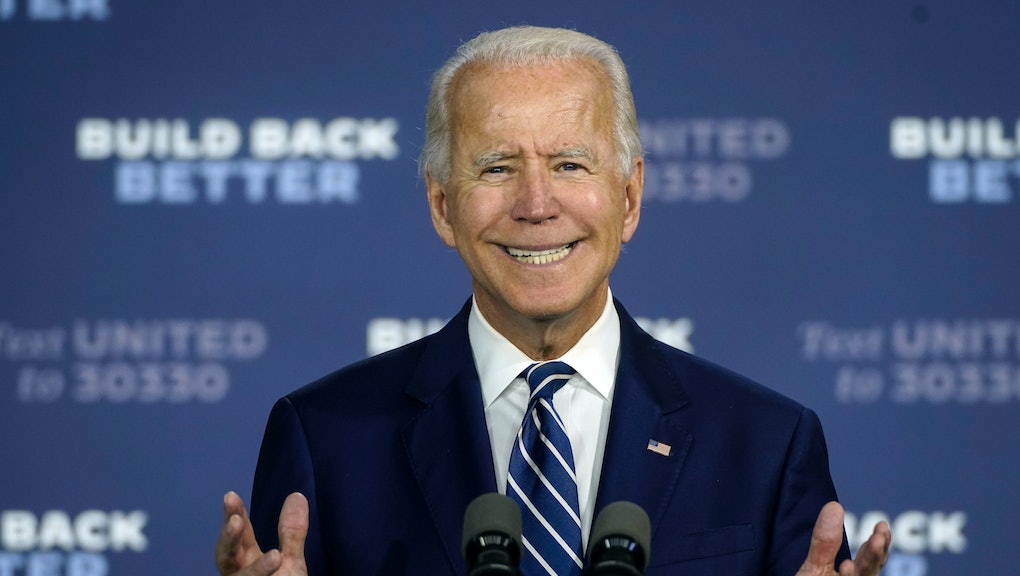 In a lot of ways, perhaps more so than in any other presidential election in recent history, Joe Biden's path to the White House is astonishingly straightforward: All he really has to do is appear minimally competent while President Trump deploys federal paramilitary groups across the country while rambling on about person, woman, man, camera, television. If I were a Biden campaign adviser, I would start and end every briefing with the candidate by reiterating a simple, straightforward point: "Don't say anything egregiously stupid, and you've got this."

On Wednesday, during a virtual town hall hosted by the Service Employees International Union, Biden somehow managed to cram at least 15 instances of being wrong into a single sentence — impressive even for someone infamous for a career's worth of verbal gaffs.

Speaking with a health care worker who described her experiences of being racially profiled, Biden set his sights on Trump and the president's well-documented history of racist actions and remarks. But then he slipped in some ahistorical nonsense (emphasis mine):

The way [Trump] deals with people based on the color of their skin, their national origin, where they're from, is absolutely sickening. No sitting president has ever done this. Never, never, never. No Republican president has done this. No Democratic president. We've had racists, and they've existed, they've tried to get elected president; he's the first one that has.

Let's be clear: Trump's words and policies have repeatedly been called out as racist. He targeted Muslim-majority countries in his travel ban and reportedly referred to African nations as "shithole" countries. His administration can be considered a manifestation of the coarse racism that has threaded itself through modern politics, and even when he leaves office — whether this year, or in four years from now — that racism will continue to exist well beyond his time as president.

But is he, as Biden claimed, the first racist to be elected president? Joe, my man, what the hell are you talking about?

Jackson's racism wasn't just limited to chattel slavery. As president, he was responsible for the deaths of thousands of Indigenous peoples who he forcibly relocated from their territory along the Trail of Tears, often to clear room for — and thereby earn the support of — southern slaveowners interested in expanding their holdings.

But let's give Biden the benefit of the doubt, and say he was only referring to presidents in the modern era. Well, he'd still be pointedly wrong.

Franklin Delano Roosevelt's internment of Japanese-Americans during World War II was so racist that even Ronald Reagan (more on him in a sec) formally apologized for it about 40 years later by signing the Civil Liberties Act in 1988.

Richard Nixon's bigotry has been well-documented, including his infamous railings against Jews, Black people, and the LGBTQ community. In one particularly overt example of the cloud of racism that hung over Nixon's administration, Reagan, then the governor of California, comfortably referred to the United Nations delegation from Tanzania as "those monkeys from those African countries" who were "still uncomfortable wearing shoes!" during a call with the president.

In a statement to CNN, Biden adviser Symone Sanders attempted to clean up her boss's misreading of history:

There have been a number of racist American presidents, but Trump stands out — especially in modern history — because he made running on racism and division his calling card and won. He deliberately foments both, intentionally causing indescribable pain because he thinks it advantages him politically. The George Wallaces of our country's history who have run on these hate-filled themes have lost.

But even by that narrower definition, Biden would still be wrong in his assessment of America's racist presidential past. If anything, Trump is simply the beneficiary of the racist "Southern Strategy" put in place by Republicans like Nixon and Reagan, which aimed at consolidating white, conservative voters into the GOP while Democrats pursued the Civil Rights Act and Voting Rights Act in the 1960s.

It is, I suppose, understandable that Biden would want to portray Trump as a racist aberration, rather than a continuation of an existing trend — Biden's campaign is in no small part predicated on appealing to those who simply want a "return" to a normalcy that largely existed only through nostalgic, rose-tinted glasses. And, based on his strength in the polls, it's a strategy that may very well carry him all the way to the White House. But denying America's very racist past, and the very racist people who helped lead the country, does no one any favors in the long run. It simply sets the United States up for failure to recognize the very factors that lead to someone like Donald Trump winning office in the first place.

More like this
Title IX will once again protect against gender identity discrimination
By Rafi Schwartz
Americans are feeling something weird and unfamiliar: optimism
By AJ Dellinger
COVID vaccine holdouts have a message to lawmakers: Show me the money
By Rafi Schwartz
Stay up to date