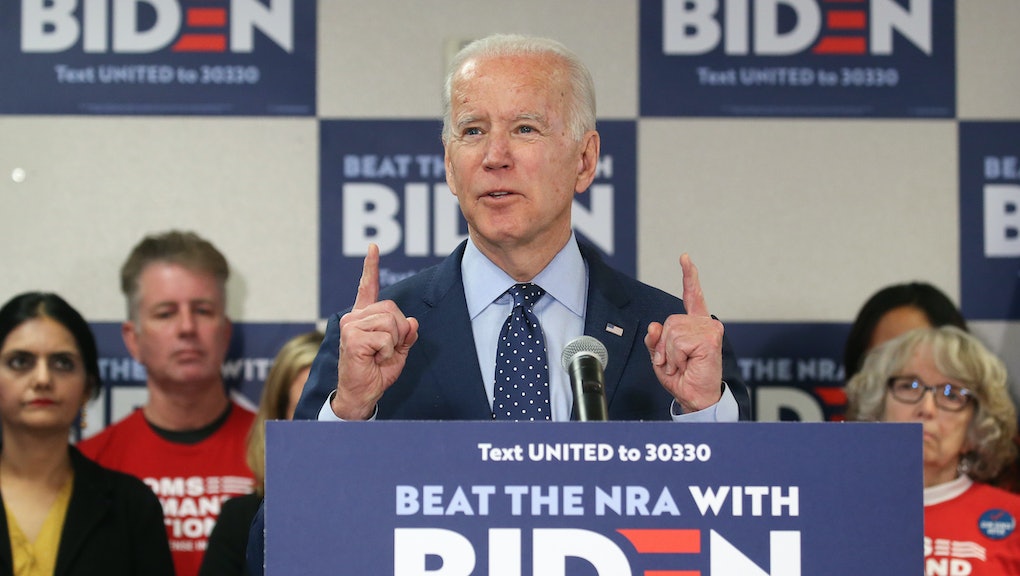 Joe Biden's record on gun control, from his early Senate days to the 2020 race

Now that Joe Biden has secured the Democratic nomination for president and chosen his running mate, the sprint toward the White House is in full swing. He's largely running on a platform of "restoring the soul" of America, one that's less concerned with policy and more focused on making an emotional appeal to voters. Still, a politician who's spent nearly half a century in public office would bring his own history of policy positions to the Oval Office. While it hasn't been a focus recently, as issues of racial justice and health care have surged to the national fore, Biden's record on gun control is worth remembering, as approaches to gun violence is a key area in which Democrats have sought to differentiate themselves from Republicans.

Biden, who owns guns himself, has long been a proponent of a strict interpretation of the Second Amendment. That is, he has been pretty consistent about what guns he believes people should have access to (e.g., handguns) and which ones they shouldn't (e.g., semi-automatic weapons). He's maintained this measured line throughout his career, and while he may not be as progressive as some of his erstwhile competitors in this realm, he's been remarkably consistent for the most part.

Biden was elected to represent Delaware in the Senate in 1973. His first major vote on issues of gun ownership, sale, and what rights are afforded to gun owners themselves came in 1986. Biden voted in favor of the Firearm Owner's Protection Act (FOPA), which was originally drafted by the National Rifle Association's lobbying and legislative arm, the Institute for Legislative Action. Introduced by Rep. Harold Volkmer (D-Mo.), he once said that the legislation was the "measure that saved gun ownership as we know it." In particular, the bill made it easier for people with convictions to have their gun rights restored and limited the oversight authority of the Bureau of Alcohol, Tobacco, Firearms and Explosives.

The legislation also created the so-called gun show loophole, which Biden would later fight against. According to the Giffords Law Center, FOPA "repealed several key public safety provisions originally enacted by the [Gun Control Act of 1968], eliminating the requirements that dealers keep sales records of ammunition transfers ... and that sellers of ammunition be licensed, and lifting the ban on interstate transfers of ammunition to unlicensed purchasers."

After that first vote to allow for people to purchase guns more easily, Biden changed his approach in the mid-1990s. At that time, Congress took up a slew of bills to combat what was seen as rampant crime. He voted with Democrats in 1993 to put a 10-year ban on semi-automatic weapons. That same year he also voted in favor of the Brady handgun bill, which mandated a five-day waiting period for gun purchases so that sellers could run a background check.

Touted at the time as the "Biden Crime Bill" (language the Biden campaign itself used when Biden ran for president in 2008), the legislation included a number of provisions around guns. For instance, the bill included further restrictions on some semi-automatic assault weapons, a ban on large-capacity magazines, and a number of changes to the way that gun possession could be prosecuted, especially if it was connected with a drug crime.

Notably, one of the amendments to the bill allowed for minors 13 and older in possession of a weapon when committing a crime to be prosecuted as adults. At the time, many white members of Congress believed in the racist notion that certain children, mostly poor people of color, were predisposed to committing crimes. Many elements of the of the crime bill were built on the belief that levying the most extreme charges against people would reduce crime. So while there were severe punishments for unlawful weapons possession included in the law, they did also pave the way for the disproportionate incarceration we see today.

Consistent with his record of voting in favor of legislation that would hold manufacturers accountable without necessarily limiting their business outright, Biden voted against prohibiting people from suing gun manufacturers. Of course, the NRA lobbied against this legislation, but the vote aligned with Biden's tough-on-NRA stance.

In 2007, Biden introduced into the Senate a follow-up to the 1994 crime bill. The legislation included a number of provisions to expand policing, which would've put more guns in the hands of police, while aiming to "stop senseless gun violence." A press release from the time also called for a renewal of the assault weapons ban and for making sure that everyone who wanted to purchase a weapon had to pass a background check. Ultimately, the bill never went anywhere.

As gun deaths rose in the U.S., including a sharp increase in the number of mass shootings around the country, Biden doubled down on passing legislation for background checks and bans on certain weapons. In 2008, Biden got a 7% approval rating from the NRA.

President Barack Obama appointed Biden to lead the administration's gun violence strategy in the aftermath of the 2012 shooting at Sandy Hook Elementary School in Newtown, Connecticut. Since then, Biden continuously affirmed the need for background checks and a ban on assault weapons, two of his main talking points.

"We have a huge problem with guns," Biden wrote last year in an op-ed for The New York Times. "Assault weapons — military-style firearms designed to fire rapidly — are a threat to our national security, and we should treat them as such. Anyone who pretends there's nothing we can do is lying — and holding that view should be disqualifying for anyone seeking to lead our country."

During his 2020 primary run, Biden harkened back to his track record as Obama's vice president and as a senator on Capitol Hill, saying, "I'm the only person that has beaten the NRA nationally. I'm the guy that got the Brady bill passed, the background checks, number one. Number two, we increased that background check when — during the Obama-Biden administration. I'm also the only guy that got assault weapons banned ... and the number of clips in a gun banned." While he bragged about beating the NRA, and continues to do so as he campaigns for the White House, Biden also said during a primary debate last June that "our enemy is the gun manufacturers, not the NRA — the gun manufacturers."

The steadfast belief in preserving the Second Amendment right to guns led Biden to a sticking point on the campaign trail earlier this year, when a Detroit factory worker claimed that the former vice president wanted to dismantle the constitutional right to bear arms. Of course, the claim isn't correct, as Biden has championed gun rights while stating a need for specific restrictions. The factory worker appeared to be alluding to Biden's support for certain gun buyback programs, or was perhaps conflating him with other Democrats' proposals. The candidate relayed a colorful response by saying, "You're full of shit," before clarifying the finer details of his position.

When it comes down to it, Biden has remained pretty consistent when it comes to guns. He's running on a presidential platform that echoes his Senate positions and leadership as vice president. The main focus of his presidential campaign is to correct for past failures of gun policy and attempt to address the harms guns pose to vulnerable people. On Biden's 2020 gun policy page he vows to prevent people with certain prior convictions, including assault and stalking, from procuring weapons and additionally to ban the online sale of weapons. He also addresses the mental health aspect of gun violence, calling for increased access to care to reduce suicides involving guns as well as to address the trauma of mass shootings for survivors.

In the end, his answer is that curbing gun violence is a matter of restricting who has access to weapons, and what's required in order to obtain a weapon in the first place — and not banning guns altogether.

More like this
The Biden administration just re-extended federal protections to trans students
By Rafi Schwartz
Two men shook hands, and CNN went wild
By Rafi Schwartz
The history of the LGBTQ+ Pride flag, from the OG rainbow to Progress Pride
By Vanessa Taylor
Stay up to date