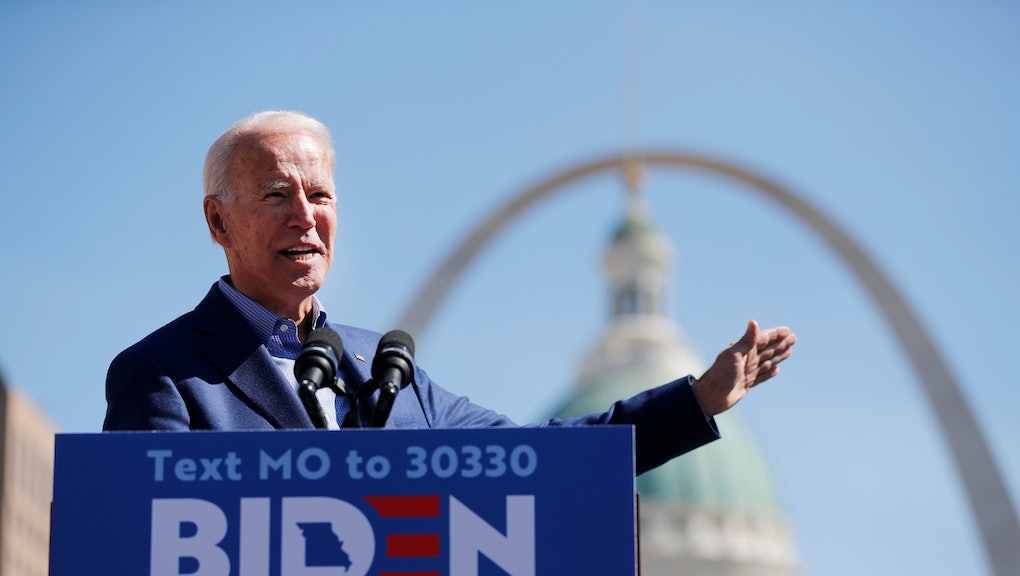 With the former vice president a strong frontrunner heading into Tuesday’s Democratic primary elections, reports are emerging about Joe Biden’s potential Cabinet choices if he’s elected. On Monday, Axios reported that sources in Biden’s camp have been discussing a range of options for top jobs like vice president, treasury secretary, and secretary of state. And as with many of Biden’s positions, the names mentioned seem almost perfectly primed to infuriate progressives, especially when it comes to the financial positions in the Cabinet.

For treasury secretary, per Axios, Biden is considering none other than Jamie Dimon, chairman and CEO of JPMorgan Chase, who is about as far right as someone can get while still ostensibly portraying themselves as a Democrat. “My heart is Democratic but my brain is kind of Republican,” said Dimon himself last year. As one of the top bankers in the country, Dimon was intimately involved in the circumstances of the 2008 mortgage crisis, ultimately lending $80 billion to Lehman Brothers after its collapse to help it sell off assets. JPMorgan Chase also received billions of dollars in bailout funds from the Troubled Asset Relief Program.

In short, Dimon represents everything that progressive Sens. Bernie Sanders (Vt.) and Elizabeth Warren (Mass.) based their entire presidential campaigns on opposing: the elevation of cutthroat capital managers to the highest positions in American society.

Another name reportedly being considered to lead the Treasury Department is Anne Finucane, vice chairman of Bank of America. A ProPublica report from 2008 explores Biden’s deep ties to BofA, noting that over the years, “Biden has been particularly cozy with MBNA, a financial services company from Delaware, and now a subsidiary of Bank of America.” Biden’s son Hunter, who’s been embroiled in controversy in Ukraine, was recruited by MBNA out of law school and worked for the company as a lobbyist. Mother Jones reported last year that the elder Biden spoke at a MBNA corporate retreat in 1997.

Biden also helped pass a bill called the Bankruptcy Abuse Prevention and Consumer Protection Act of 2005, which was favored by banks because, according to ProPublica, it made bankruptcy protections harder for consumers to actually obtain. As a senator from Delaware, where many financial companies are based because of its lax tax laws, Biden’s relationships with banking and credit industries run deep. Mother Jones reports that Biden helped defeat a proposal by reformers that would have made companies file for bankruptcy in states where they were actually based — an initiative that would have taken money away from Delaware’s legal industry given it makes massive profits off of litigating bankruptcies in the state. Some called the reform “the Delaware killer.”

A New York Times report additionally notes that Biden was one of a group of five Democrats in 2005 who sided with Republicans to defeat proposals, supported by then-Illinois Sen. Barack Obama, that would have added warnings to consumers about the dangers of making minimum credit payments and strengthening bankruptcy protections.

Notably, the Axios report also says that Biden is considering Warren herself for the treasury secretary position, which “could help unite the party.” Warren and Dimon represent essentially opposite sides of the Democratic Party when it comes to their approach to capital and banks. Warren, who came up with the idea for the Consumer Financial Protection Bureau, has made attacking corruption in corporate finance a center of her career. In 2002, in a report on attempts to reform the financial industry, Warren attacked Biden specifically for his “energetic work on behalf of the credit card companies,” Mother Jones notes.

If Biden wins the presidency, he will have to decide whether he wants to take Warren’s critiques seriously, or continue the cozy relationships with finance that have defined much of his political career.

More like this
Biden's $1.8 trillion "American Families Plan" is a massive down payment on the future
By Rafi Schwartz
Biden's big Earth Day climate pledge did not impress everyone
By AJ Dellinger
Biden's pledges aren't enough to avoid the worst effects of climate change, new study says
By AJ Dellinger
Stay up to date