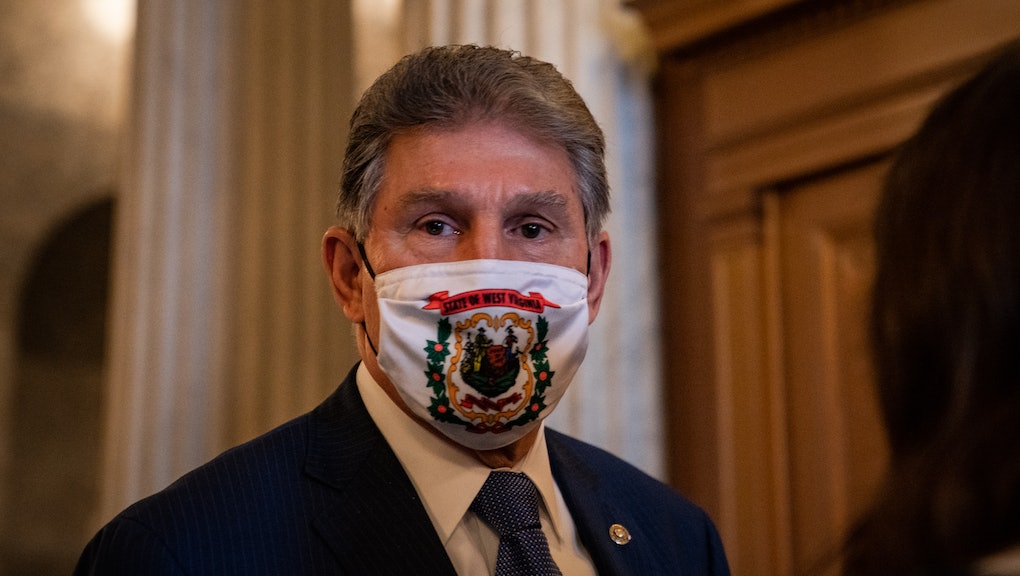 Joe Manchin is loving this

It's entirely possible that the most powerful person in the United States Senate isn't Majority Leader Chuck Schumer, who controls what bills are brought to the floor. Nor is it Minority Leader Mitch McConnell, who has spent a geologic era turning the upper chamber into his own private fiefdom. Nope, these days the big man on campus might very well be West Virginia Democrat Joe Manchin — the most unambiguously right-wing Democrat in office today.

Manchin, a senator for more than a decade, has spent his career in public service embracing the misnomer of "centrism" en route to becoming the critical fulcrum in a legislative body split evenly — and painfully — down party lines. When a single vote can derail an entire legislative agenda, who holds more power than the person who has shown time and time again a willingness to do just that?

The latest display of Manchin's outsize power has come with the senator signaling an "openness," as The New York Times put it, to altering the frustratingly ossified rules of the Senate to make it easier to pass laws without the threat of a filibuster. It's the sort of move that should be taken very seriously, but also must absolutely be een through the lens of Manchin's uniquely potent senatorial position.

At issue is the mounting pressure among Democrats to abolish the Senate filibuster in order to move forward on a suite of legislative measures that — given the 50-50 split in the Senate — would otherwise likely be dead on arrival under the threat of Republican obstruction. And while Manchin stated unambiguously during an appearance on Sunday's Meet the Press that "I’m not going to change my mind on [maintaining] the filibuster," he did offer an alternative of sorts.

"If you want to make it a little bit more painful, make him stand there and talk, I'm willing to look at any way we can," he continued. "But I'm not willing to take away the involvement of the minority."

While making the threat of a filibuster a more, as Manchin put it, "painful" process would certainly be a step in the right direction to ease the legislative stalemate that has blocked Congress from making progress for most of the last decade, consider that Manchin is essentially throwing a bone to his Republican colleagues while simultaneously hinting at, but not committing to, a big win for Democrats. He's offering a solution (of sorts) that would still enable Republicans to derail Democratic initiatives even if the hurdle gets a bit a higher — and, perhaps most importantly, consider that in that scenario, Manchin's role as the Senate's de facto axis of power would remain largely unchanged.

By proposing a vague — hopeful sounding, but ultimately status quo-maintaining — middle ground, Manchin, who votes with Republicans more than any other Democratic member of the Senate, is essentially reasserting himself as the crucial vote in Congress. By attempting to blunt, or at least divert, the push for abolishing the filibuster, Manchin is actively working to maintain his own crucial position of authority within the upper chamber of Congress.

Does that mean his idea would be a net negative? Not necessarily. But for now let's hold the applause for someone whose Earth-shaking piecemeal solution only serves to leave him as important as ever.