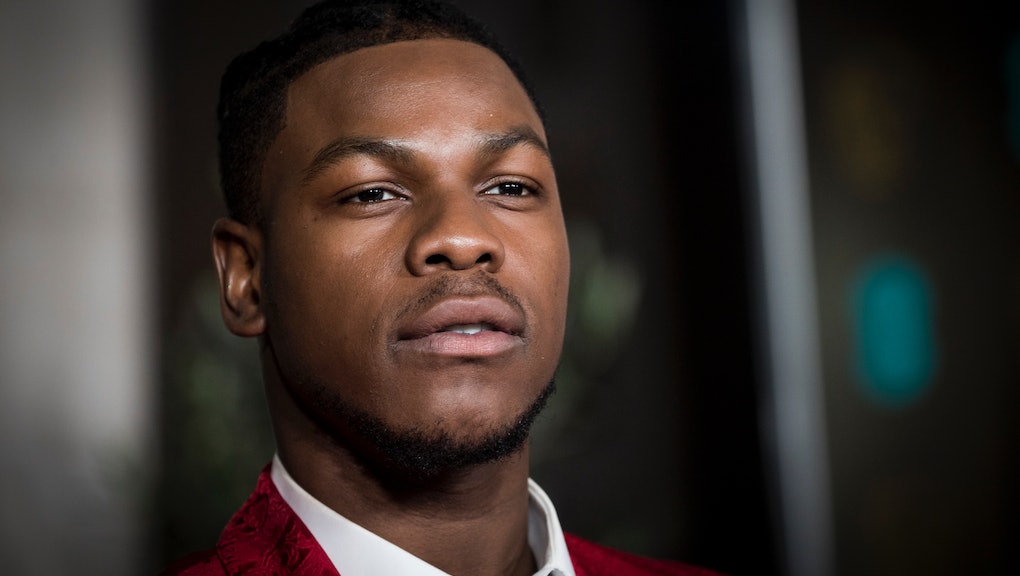 Whether John Boyega is panting after a crash-landing on Jakku or delivering an impassioned speech at a Black Lives Matter protest, he’s a charming, often galvanizing presence. Which is why the franchise’s choice to minimize his role in Star Wars: The Last Jedi, and The Rise of Skywalker didn’t make any sense to fans. In a new interview with British GQ, Boyega harshly criticizes Disney and Star Wars for pushing its Black lead aside and opens up about racism he faced from Star Wars fans throughout the series.

The 28-year-old actor details childhood experiences of racial attacks and police profiling, along with the events leading up to his viral, remarkably brave speech at the London Black Lives Matter protest on June 3. Eventually, he casts his ire upon Disney in his first major interview since wrapping the Star Wars franchise last year.

In the interview, Boyega zeroes in on The Force Awakens’ marketing, which appeared to center him in a lead role, before essentially shuttling him off to the supporting cast in future movies. “What I would say to Disney is do not bring out a Black character, market them to be much more important in the franchise than they are and then have them pushed to the side,” he said. “It’s not good. I’ll say it straight up.”

He also takes aim at the subtle discrimination toward Black characters in blockbuster films, how they’re not often afforded the same confidence as white counterparts. “They’re always scared. They’re always fricking sweating,” Boyega says. The Star Wars sequel trilogy very transparently centered Daisy Ridley and Adam Driver as it progressed, and Boyega isn’t shy in suppressing his distaste for the studio’s treatment of him and Kelly Marie Tran, who received an onslaught of online harassment:

“Like, you guys knew what to do with Daisy Ridley, you knew what to do with Adam Driver,” he says. “You knew what to do with these other people, but when it came to Kelly Marie Tran, when it came to John Boyega, you know fuck all. So what do you want me to say? What they want you to say is, ‘I enjoyed being a part of it. It was a great experience...’ Nah, nah, nah. I’ll take that deal when it’s a great experience. They gave all the nuance to Adam Driver, all the nuance to Daisy Ridley. Let’s be honest. Daisy knows this. Adam knows this. Everybody knows. I’m not exposing anything.”

It’s compelling to see Boyega acknowledge the doors this franchise opened for him, calling it an “amazing opportunity,” while grappling with how unprepared the industry was to protect him from pervasive racism. He recalls one stylist “cringing at certain clothes I wanted to go for” on the press junket, and a hairdresser. Boyega, perhaps forgetting about the relentless racist harassment and death threats Kelly Marie Tran allegedly received before deleting her Instagram account, describes the uniquely terrible messages he received as a Black cast member:

“I’m the only cast member who had their own unique experience of that franchise based on their race,” he says, holding my gaze. “Let’s just leave it like that. It makes you angry with a process like that. It makes you much more militant; it changes you. Because you realise, ‘I got given this opportunity but I’m in an industry that wasn’t even ready for me.’ Nobody else in the cast had people saying they were going to boycott the movie because [they were in it]. Nobody else had the uproar and death threats sent to their Instagram DMs and social media, saying, ‘Black this and black that and you shouldn’t be a Stormtrooper.’ Nobody else had that experience. But yet people are surprised that I’m this way. That’s my frustration.

Taken together, it’s the most scorching honesty we’ve seen a major star level toward the blockbuster franchise. Boyega’s co-star Oscar Isaac has lightly criticized the Mouse House after The Rise of Skywalker’s release, suggesting the “Disney overlords” pushed back on his suggestion to fully commit to a Finn and Poe romance. Now the commitments have been wrapped, it’s thrilling to see the stars of a massive franchise condemn its retrograde ideals without any concern for getting more blockbuster work.