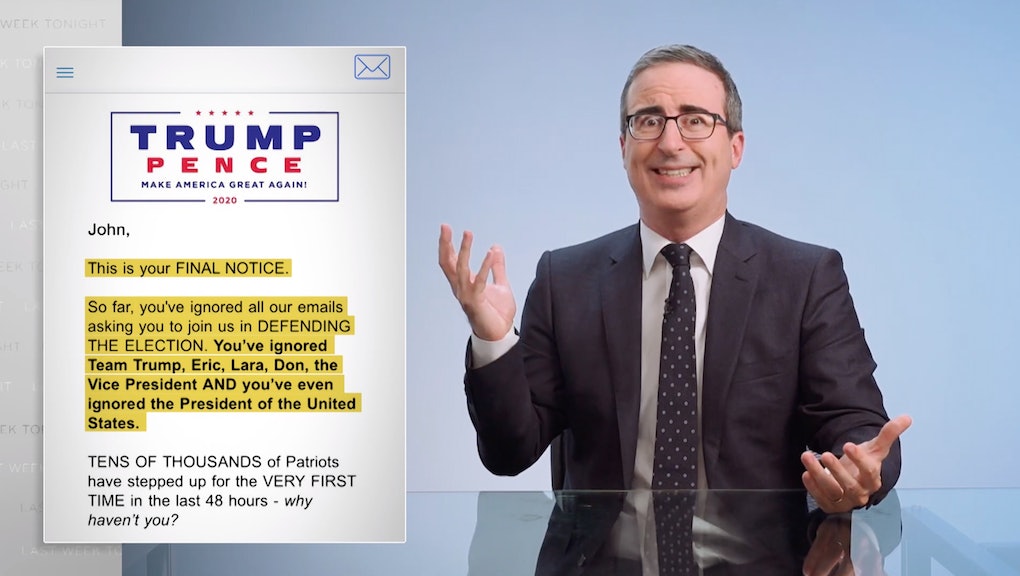 John Oliver slammed Trump for scamming his own supporters

It’s the line John Oliver waited years (specifically, four of them) to gleefully deliver: “Donald Trump isn’t going to be president anymore,” the comedian announced at the top of Sunday’s Last Week Tonight. Yes, we’re all thrilled! Too bad the Trump administration seems hell-bent on wringing every last ounce of nefarious energy out of the highest office in the land. With 72 days to go until Inauguration Day, there’s a lot of time left for shady shenanigans.

Specifically, the outgoing president’s latest scam involves swindling his supporters out of their money under the guise of “election defense.” You see, starting last Wednesday, the Trump camp began sending dozens of daily, frantic text messages and emails soliciting donations to fund legal challenges of the election outcome. The president’s cronies have blitzed state and federal courts with upwards of a dozen lawsuits in the past week, trying to stop the count of votes or disqualify swaths of ballots. Thankfully, most of these challenges seem destined to stall. But in a very Trumpian twist, it turns out half the money collected to supposedly dispute the election will instead go towards paying down his campaign debt.

On his show, Oliver shared a screenshot of a recent fundraising email he received from the Trump team, which read: “This is your FINAL NOTICE. So far, you’ve ignored all our emails asking you to join us in DEFENDING THE ELECTION. You’ve ignored Team Trump, Eric, Lara, Don, the Vice President AND you’ve even Ignored the President of the United States.” (True to Trump’s grammatical style, the message was riddled with unnecessary capitalizations.)

The comedian then drew attention to an important post script included in the email. “Quick side note about those solicitations: in the fine print it mentions that rather than funding lawsuits, half of any contribution will be used to retire debt from his re-election campaign,” Oliver said.

The Trump camp hasn’t divulged just how far in the hole they are from the last few months of electioneering, but based on what evidence we do have, it seems like a lot. According to CBS News, the most recent federal campaign finance records available tallied the Trump campaign as having $60 million cash-on-hand in early October. In the final month of the election, they spent upwards of $160 million on TV ads alone. When you factor in the many, many rallies Trump staged during his final push for re-election, plus billboards, mailers, emails, and all the rest, we’re talking about a hefty sum. It’s twisted and fitting that in one of his last, desperate acts, the president is begging his supporters to subsidize his loss.

After detailing the ways in which the Trump administration is still trying to swindle America, Oliver ended his broadcast on a more hopeful note: “The fact is: Trump lost this election. He lost. All that bullshit that we’ve grown accustomed to seeing work did not work this time,” Oliver said. “And it’s not like Trump and his family are going to stop. They’re going to carry on grifting and lying like they’ve always done. But once he’s out of the White House, it’s just not going to have the same effect anymore. It’s not going to directly impact every American’s life. And that alone is fucking fantastic.”

More like this
The NFT gold rush, explained by the world's first meme manager
By Kara Weisenstein
Why is Facebook this confused over letting Donald Trump back?
By Rafi Schwartz
Trump is having his best week since leaving the White House
By Rafi Schwartz
Stay up to date