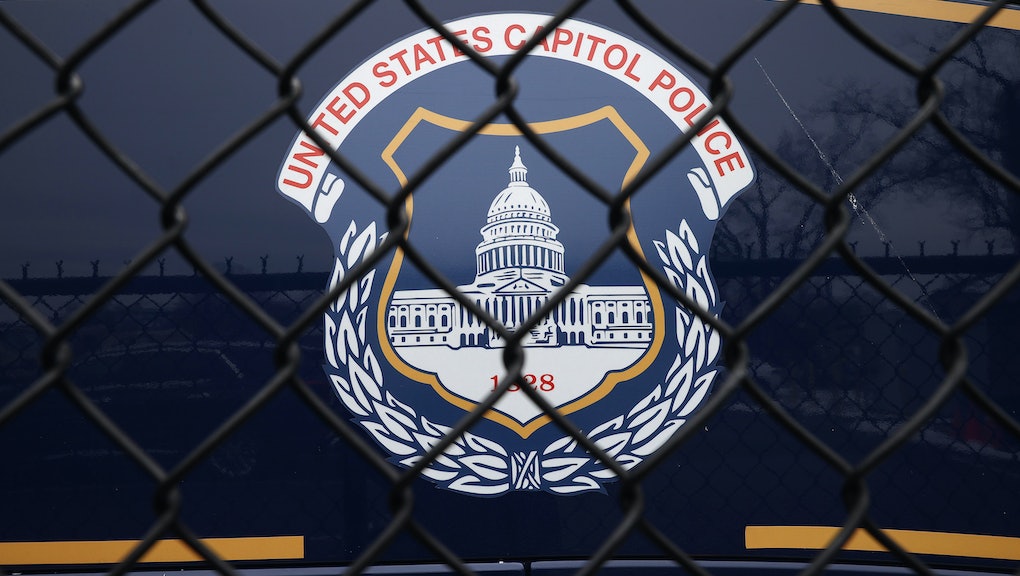 It's been nearly three months since a wave of sedition tourists, hardcore white nationalists, and various militia-members stormed the United States Capitol building in an ultimately unsuccessful attempt to overturn the results of the 2020 presidential election. In that time, there's been a cavalcade of details fleshing out just what took place after the hoard breeched the halls of Congress on Jan. 6 and what role then-President Donald Trump played in animating his supporters during the lead-up to the assault.

This week, the government's ongoing investigations took a significant leap forward, with a new Justice Department filing that points to evidence of right-wing extremist groups working together. As reported by Politico, the evidence shows that members of the Oath Keepers militia, III Percenters militia, and Proud Boys street gang spent the weeks leading up to the insurrection in direct communication with one another and may have actively coordinated their roles in storming the Capitol building.

In documents filed Tuesday in the U.S. District Court of the District of Columbia, federal prosecutors argue against a motion from defendant Kelly Meggs, leader of a Florida Oath Keepers chapter, for a pretrial release. In the filing, prosecutors allege that Meggs not only participated in the Jan. 6 insurrection attempt, but also actively worked to coordinate efforts with a number of organized groups in the weeks prior.

"We are ready for the rioters, this week I organized an alliance between Oath Keepers, Florida 3 %ers, and Proud Boys," prosecutors said Meggs wrote in a Facebook post from mid-December. "We have decided to work together and shut this shit down."

In another post, he reportedly wrote, "Contact with PB and they always have a big group. Force multiplier."

Later that month, Meggs wrote a series of messages to an unnamed recipient, in which he lamented Washington D.C.'s gun laws, and eventually outlined his broad coordinated plan with the Proud Boys:

You can hang with us we will probably be guarding [redacted] or someone during the day but then at night we have orchestrated a plan with the proud boys. I've been communicating with [redacted] the leader . We are gonna March with them for a while then fall back to the back of the crowd and turn off. Then we will have the proud boys get in front of them the cops will get between antifa and proud boys. We will come in behind antifa and beat the hell out of them.

This week's filings in the Meggs case are the latest addition to a growing body of court documents and law enforcement statements suggesting the Jan. 6 insurrection contained a deeper, more conspiratorial plan that played out under cover of the broad chaos of the advancing mob. Already, multiple Proud Boys and III Percenter militia-members have been charged with "conspiracy" in addition to the various other allegations of violence, trespassing, and property damage.

According to The New York Times, federal prosecutors have been considering charging a number of those arrested during the riot with "seditious conspiracy" — something that would represent a dramatic escalation in the government's case against coup participants if the charges are applied.