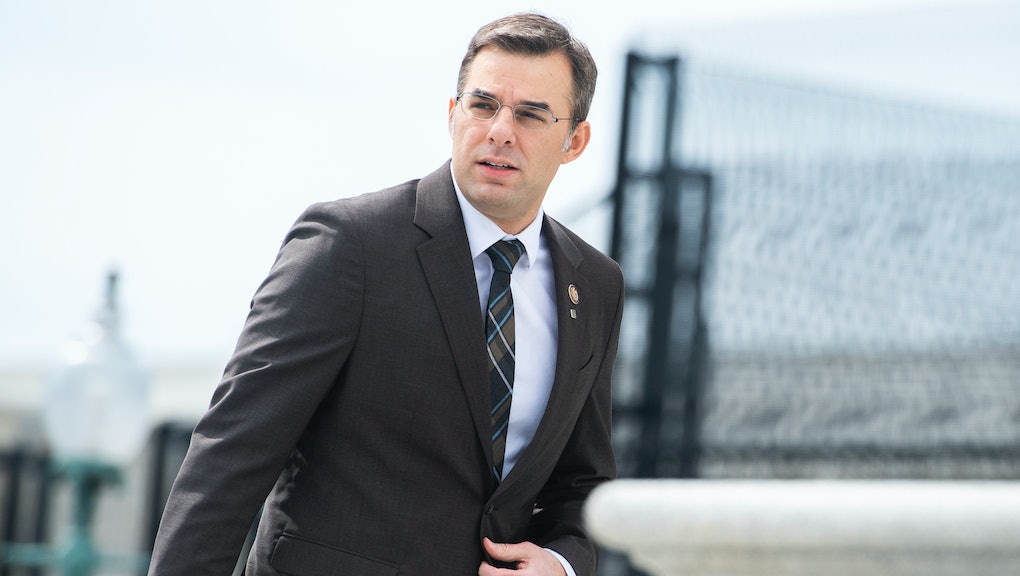 On Tuesday, Michigan Rep. Justin Amash announced that he will form an exploratory committee for a presidential run as the Libertarian Party’s candidate. Amash, formerly a member of the ultra-right-wing House Freedom Caucus, left the Republican Party last year on July 4 and became an independent out of frustration with the party’s defense of President Trump. He ended up voting for Trump’s impeachment, even as all of his former Republican colleagues in the House voted against it. Though Amash made the Freedom Caucus his home for years, he always tended more toward the libertarian side of the party rather than its Fox News culture warrior wing, which made the GOP a tough fit for him in the Trump years. His run for president as a libertarian, while currently sitting in the House, makes him by far the highest profile candidate to potentially vie for the White House with a third-party bid.

The question, of course, is how much impact he’ll have on Trump and Joe Biden, the presumptive Democratic nominee. Who will he draw more voters from, and how will he impact the delicate balance of the Electoral College? One important factor is that Amash represents Michigan, which is the state Trump won by the smallest margin in 2016 — only 0.2%. It wouldn’t take a whole lot for Amash to swing the race one way or the other in his home state.

It’s easy to assume that Amash’s run will benefit Biden. Amash, after all, was a Republican for most of his career, and his distaste of Trump notwithstanding, is quite conservative as far as both economic and social policy go. He opposes abortion, calling himself "100% pro-life" in 2017, and he voted for Trump’s Obamacare repeal bill in 2017. Although he has become a favorite of Twitter #resistance types due to his impeachment vote, it’s hard to imagine anyone left-of-center voting for him.

However, independents and right-of-center voters are another matter. Amash may provide an outlet for disaffected Republicans and other non-Democrats who might otherwise vote for Biden. The only Michigan poll to include Amash, from last May, found that Biden’s lead over Trump in Michigan fell from 12 points to six points when Amash was included as a third-party challenger. That poll also found that Amash drew 16% of independent voters in the state.

It’s hard to draw too many conclusions from a single poll from a year ago. But other numbers also show signs of Amash helping Trump — writing in The Washington Post, Aaron Blake argued that Biden is more at risk from a third-party run because of so-called “double-haters,” aka people who say they hate both candidates. In 2016, Trump won these voters by a double-digit margin in Midwest swing states. This time around, however, Biden seems to be leading among them — Quinnipiac gave him a 32-point margin nationally in a poll of double-haters. Giving these voters a third option could move some of them away from Biden’s camp.

Trump himself seems to be welcoming Amash’s entrée into the race. “I think Amash would make a wonderful candidate, especially since he is way behind in his district and has no chance of maintaining his congressional seat,” he wrote in characteristically sarcastic fashion, quote-tweeting an article that claimed Amash’s run will help him. “He almost always votes for the Do Nothing Dems anyway. I like him even more than Jill Stein!”

Still, it’s far too early to draw any substantive conclusions about which way the wind will blow on Amash just yet. In the end, his influence may be marginal even compared to that of 2012 and 2016’s libertarian candidate, Gary Johnson, who was also a prominent former Republican. Writing at CNN, analyst Harry Enten argued that Amash is likely to have a “minimal” impact on the race. “The polling on Amash is limited, but he's averaged just over 2% of the vote nationally in the polling that does include him,” Enten wrote, noting that early polling tends to overstate the impact that third-party candidates have; for example, Johnson was polling at 12% in March 2016, before ultimately winning only 3% of the vote.

Furthermore, Enten wrote, “The polls don't show that [Amash] takes overwhelmingly from any one demographic group. Nor do they show him polling overwhelmingly with any one partisan group. Of course, with his core support being so small, that shouldn't be too surprising.”

Rather, Enten argues, a more impactful third-party run would likely come from the left, where a candidate might be able to draw more heavily from Biden than Trump. With former Minnesota Gov. Jesse Ventura sniffing around the Green Party, that’s one more thing for Democrats to worry about — aside from the fact that the man their about to anoint the party’s standardbearer has been hit with a credible sexual assault accusation that he’s failed to directly address for weeks.

In the end though, one person is sure to be boosted by Amash’s run: Amash. Beginning with his Twitter outrage during the beginning of Trump's presidency and extending through his grandiose July 4 exit from the Republican Party, his quixotic presidential run is the logical continuation of a chain of events that is sure to end up with Amash being sworn in to a nice cozy contributor gig on CNN.