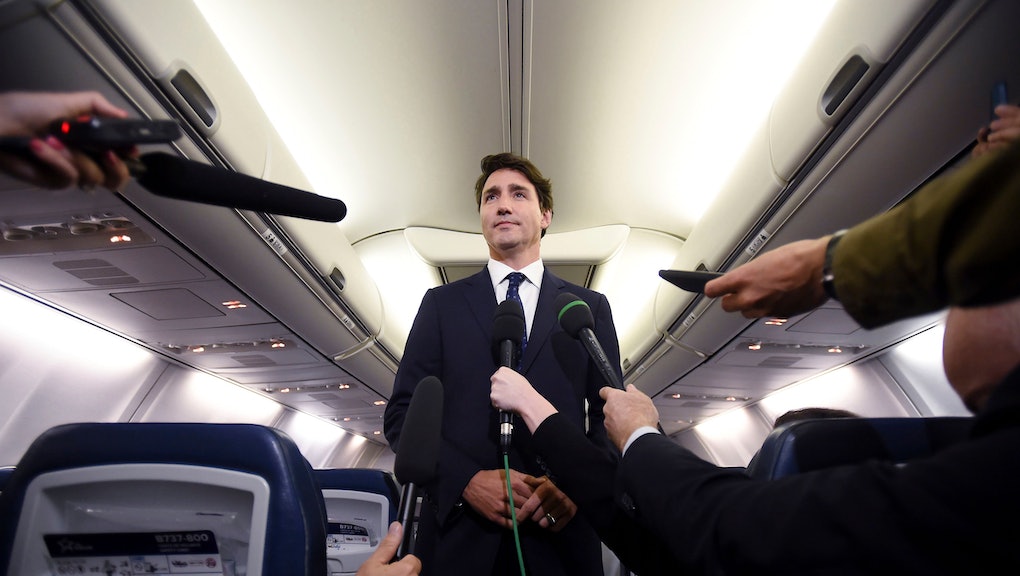 Just one month before the country's national election, Canadian Prime Minister Justin Trudeau is facing public outrage over racist photos that have resurfaced from his past. In two separate images, one from when he was in high school and another from when he was a 29-year-old private school teacher, Trudeau appears in blackface and brownface makeup respectively.

Time broke the story of Trudeau in brownface late Wednesday, publishing a photo from the 2001 yearbook of the West Point Grey Academy, the private school where Trudeau was a teacher. In the image, the prime minister is dressed as a character from the movie Aladdin, wearing a turban and robes with his face, neck, and hands dramatically darkened by makeup.

The photo was taken at an event with an "Arabian Nights" theme, the Liberal Party of Canada confirmed. Trudeau is head of the Liberal Party and is facing stiff competition from the Conservative Party in next month's election.

Trudeau apologized to reporters Wednesday night, following the publication of Time's report. "I shouldn't have done that. I should have known better and I didn't. I'm really sorry," he said. During his remarks, he also revealed the existence of the older photo, which depicts him performing the Jamaican folk song "O Day" during a high school talent show while wearing blackface.

Canada's Global News added another instance to the file Thursday morning, publishing a video that appears to show a young Trudeau once again covered in dark makeup. It's unclear where and when the video was taken, Global News said, but a "senior member of the Liberal campaign" confirmed that it was Trudeau.

Trudeau did not address the video specifically, and the Liberal official who spoke to Global News referred the site to his previous comment from Wednesday night. During that session with reporters, when the prime minister was asked whether there were any additional moments he wanted to admit to, he said, "The fact of the matter is that I’ve always — and you’ll know this — been more enthusiastic about costumes than is sometimes appropriate," per Time.

The National Council of Canadian Muslims called the photos of Trudeau published Wednesday "deeply saddening," but thanked the prime minister for offering an apology "less than an hour" after the organization requested one.

Canadaland, another Canadian news website, published another photo Thursday from the "Arabian Nights" party that shows Trudeau in the offensive makeup while posing with two men who appear to be Sikh.

Jagmeet Singh, the leader of Canada's New Democratic Party and the country's first non-white leader of a major party, addressed the controversy in an emotional statement Wednesday. "Tonight is not about the prime minister. It's about every young person mocked for the color of their skin. The child who had their turban ripped off their head," Singh wrote on Twitter. "To you, I say you are loved." On Thursday morning, in light of the new revelations, Singh said: “I have to really point out what we’re seeing now is an ongoing pattern of behavior that’s really going to hurt Canadians. They’re going to see the prime minister mocking the realities that so many Canadians live with."

Politico noted that the controversy is primed to exacerbate existing racial tensions in Canada. "Past incidents of this sort have seen some Canadians attempt to argue that brownface or blackface is an American import — and that outrage over it counts as over-the-top political correctness in a land without the same history of Jim Crow laws and Al Jolson minstrel shows," Politico explained, noting that in predominantly French Quebec, condemnations of blackface have sparked some stringent defenses.

Still, as the English-speaking son of a former Canadian prime minister, and the leader of the country's ostensibly progressive wing, Trudeau is facing an increasingly uphill battle as he gears up for the Oct. 21 election. His candidacy was already wounded earlier this year by a political scandal that prompted questions of whether the prime minister had unduly used his political might to protect a large Montreal corporation from criminal persecution. On Thursday, the CBC reported that Trudeau's re-election campaign was "on pause" in light of the racist reveals.