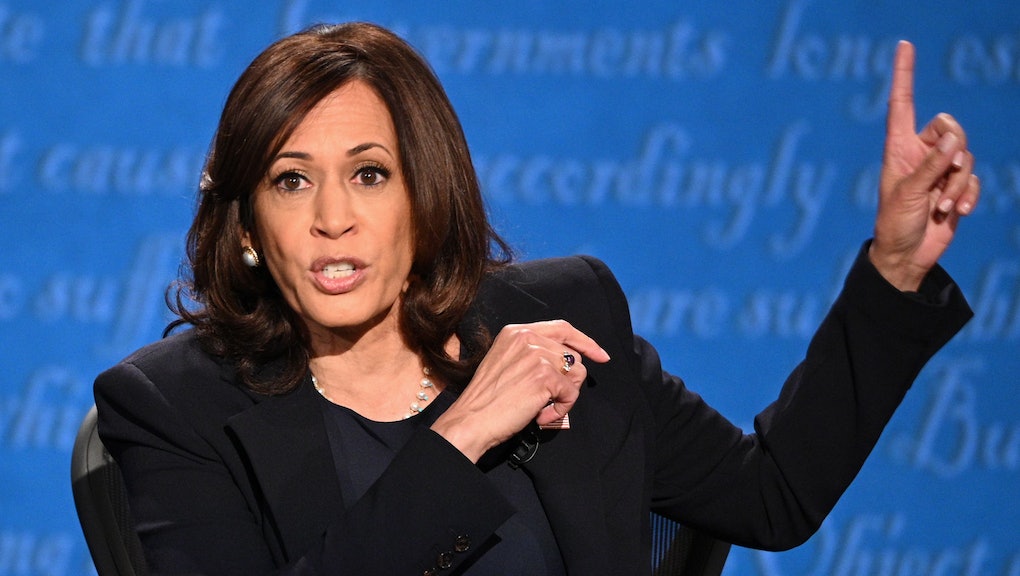 Kamala Harris knows fracking is bad. She shouldn't have to pretend otherwise

Aside from the fly that perched itself atop Mike Pence's head, there was another unexpected star that took center stage during Wednesday night's Vice Presidential debate: fracking. The controversial practice, which includes shooting high-pressure fluids deep into the Earth to release gas reserves, was made into a central issue when Vice President Mike Pence accused Kamala Harris and Joe Biden of wanting to ban the practice. Harris pushed back, and the conversation quickly turned into two people arguing over who loves fracking more.

For viewers, it turns out this particular part of the debate was largely a snoozefest, and more confusing than it was clarifying. According to a report from MarketWatch, one of the most-searched terms during the debate was "fracking," including related questions like "What is fracking?" and "Does Kamala Harris support fracking?" As the candidates kept trying to bludgeon one another with the topic, most people watching were just trying to catch up on the basics.

Fracking got outsized importance during the debate because while large parts of the country may be mostly unaware of the practice, it's extremely important in a few states that will be hotly contested on election night, particularly Pennsylvania. President Trump won the state in 2016 by less than 50,000 votes but is currently trailing in polls there by as much as 13 points. Fracking is big business in Pennsylvania, where there are thousands of active wells. The practice is credited with creating as many as 600,000 jobs in the state and lifting economies in towns that were hurting after the 2008 recession. Because of that, the commonly held belief is that in order to win Pennsylvania, you can't bad-mouth fracking.

Kamala Harris decided to go along with that line of thinking. In toeing the line for her ticket's policies, she insisted repeatedly, "Joe Biden will not end fracking. He has been very clear about that. She's correct about that. Biden has said repeatedly over the course of his candidacy that he has no interest in doing away with fracking. During a speech in the critical swing state, Biden made his position pretty explicit: "I am not banning fracking. Let me say that again. I am not banning fracking. No matter how many times Donald Trump lies about me." The closest he's come to suggesting otherwise came during a March debate when Biden claimed that there would be "no new fracking" under his administration, while not committing to do away with the practice entirely.

But while Harris is running the Biden playbook, as any Vice Presidential candidate is expected to do, she actually knows better. During her bid to become the Democratic nominee for president, she explicitly said that she would ban the practice if elected to that office. "There’s no question I’m in favor of banning fracking,” she said during a CNN town hall while she was still in the race. At the time, she correctly identified the environmental effects of fracking, telling the audience at the event, "we have to just acknowledge that the residual impact of fracking is enormous in terms of the impact on the health and safety of communities.”

The fracking boom happened so fast that it was hard for scientists to get a good grasp on just what kind of impact it had on the environment and surrounding communities. But after a few years of research, basically every study points to the practice having some dangerous and occasionally deadly effects.

In 2016, Former EPA scientist Dominic DiGiulio published a study that showed fracking can result in polluted drinking water. Other studies have found the practice to be in part responsible for seismic events, including earthquakes, across different parts of the country. Last year, a report combining research from more than 1,700 studies showed that fracking contributes to air pollution and can even release radioactive materials. One of the few studies that have attempted to document the long-term effects of fracking found it was linked to higher rates of preterm births, high-risk pregnancies, asthma, migraine headaches, fatigue, skin disorders, and other health conditions in communities near wells and drilling sites.

While Harris made the case for fracking to appeal to Pennsylvanians, the fact is that might not be what those residents want to hear anymore. A CBS News poll from August found that a majority of registered voters in the state, 52 percent, now oppose fracking. A survey conducted that same month by Global Strategy Group and Climate Power 2020 found that 50 percent of Pennsylvanians had an unfavorable view of fracking, while just 32 percent saw the industry in a more favorable light. These findings follow a January poll conducted by Franklin and Marshall University that found half of all Pennsylvanians believe the environmental risks of gas drilling outweighs the economic benefits it may provide.

Harris and Biden shouldn't have to pretend that fracking is a net positive. They shouldn't feel the need to throw their support behind a practice that has been proven time and time again to harm the environment and put the health of communities at risk. There is no point in trying to run to the right of Trump and Pence on the issue, particularly since Biden doesn't support a ban on fracking and Pence spent the debate insisting that he does. There's no way to win when you're playing chicken with a death cult that has actively denied scientific consensus at every turn. Pennsylvanians already see the effects of fracking, and a majority are ready to be done with it. Biden and Harris should embrace that.