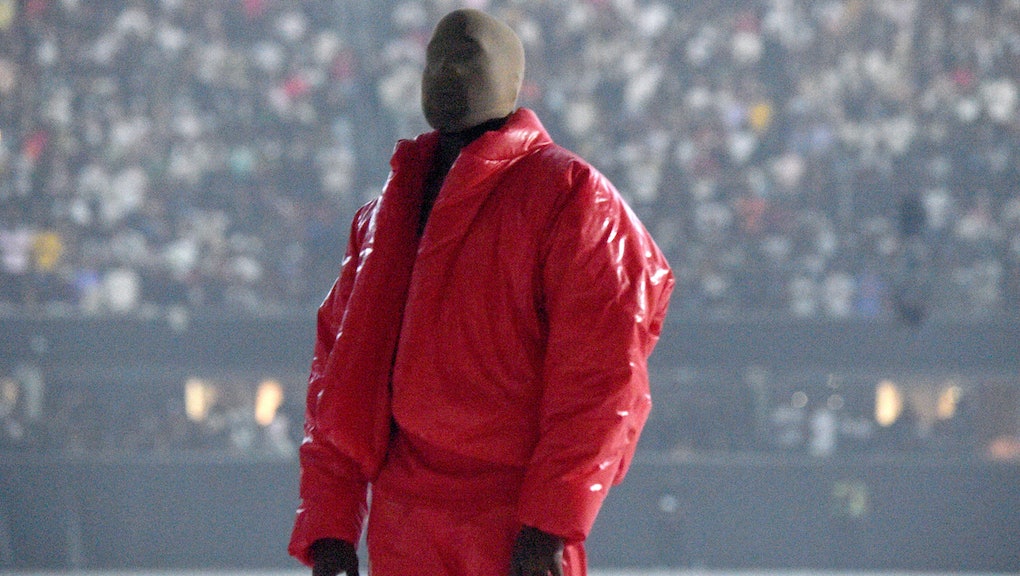 After watching the second Kanye West listening event for his 10th studio album, Donda, one thought was impossible to shake: He was in control the entire time. Over the past three weeks, West has held two gargantuan listening events, successfully focusing the world's attention on his genius rather than the problematic behavior he has yet to account for.

Once again the spotlight was on his stage, and the masked music manipulator never ventured outside the confines of what he wanted the world to focus on. The stage for his performance art was a recreation of the cramped living conditions he subjected himself to for two weeks in the Mercedes-Benz Stadium to "complete" Donda. This was the same setup he shared with the world in an Instagram post that captivated social media in meme transfixion. By the time of last night's listening, the internet had compared West's living conditions to prison, photoshopped Batman into West's own Batcave, and watched as he popped up at an Atlanta United soccer game being held at the stadium like it was a free concert being thrown in the common area of someone's dorm. And that's before he went full Truman Show.

Around 1 AM ET on Thursday, Apple Music released a link to a livestream of the "Kanye West Presents a Donda Event," including a 24-hour uninterrupted stream of the room West had been living in, seemingly to manufacture hype.

Throughout the day, people obsessively watched the livestream hoping to see what the mad genius would do and which celebrities would fall into West's secluded orbit. He did not disappoint. Chance The Rapper, Vic Mensa, Fivio Foreign, Steve Lacy, and the Lox fresh off a beyond viral victory over Dipset on VERZUZ all made appearances in the audio-less stream as many watched the creative machinations behind an album we still have yet to hear. West invited the world in to control what the world got out of him.

He hasn't done a single interview or spoken a word on camera over the last three weeks of this album rollout, an uncharacteristic silence that points to a calculated move on West's part. For the past month, interest in Kanye West has largely been centered around the musical spectacle he has created and not the drama in his life, which the media typically loves to obsess over.

West succeeded in distracting everyone from his personal controversies by giving them what they've always wanted from him: access into his creative space, a look at his celebrity interactions, and enough content shared at the speed of memes to make any "slavery was a choice" comments feel like ancient history.

The cot and clothes from his prison cell of a living space as the center of his performance was akin to an actor winking at the camera, a subtle reveal to the viewer that there is nothing separating what the performer knows and what the audience knows. The centerpiece of the show was the thing we had been staring at all day, the thing that had been sold to us as exclusive access, a behind-the-scenes look at the artist at work — and Kanye knew that's exactly what we wanted. So, when the listening event concluded with West's relaxed limbs being slowly raised to the blinding light of the Mercedes Benz Stadium ceiling, he was being sent to a heaven of his own creation.

That's heaven for Kanye West: all eyes on him until he chooses to leave the audience wanting more of his genius and not his life. And we still don't have the fucking album.