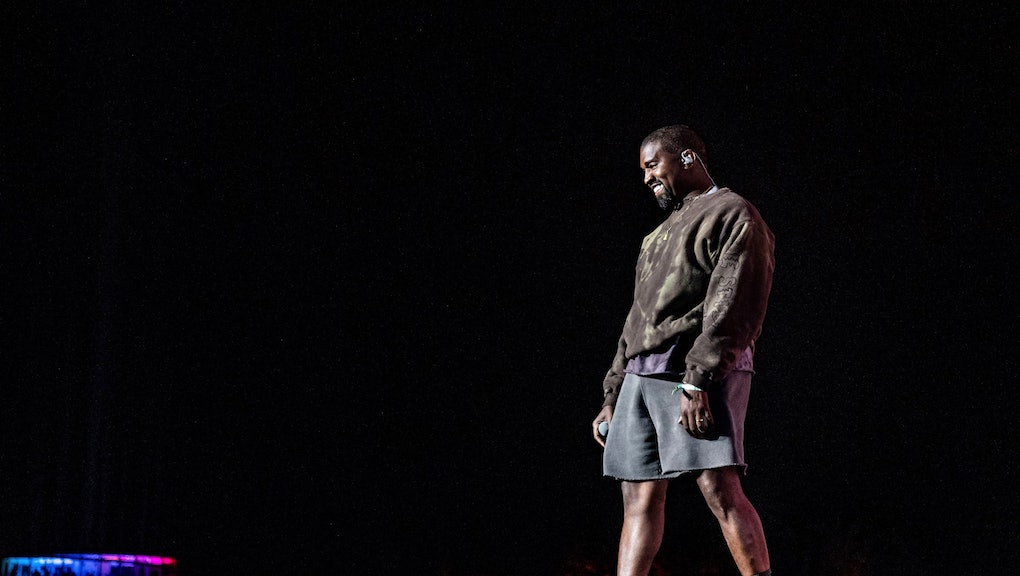 I grew up going to a black baptist church. Not every week, but there were many Sundays when my mom ignored the morning routine of me questioning if King James really knew Jesus, and I’d find myself irked on a red cushioned church pew. The only thing that could reliably shake me out of my defiance was the music. I was in the ‘kiddie chorus’ and, at age 6, got filled with “the spirit” for the first time when the adult choir sang the entire sanctuary into spiritual hysteria. From then on, I remember listening to each selection with rapture as they’d belt classics like “We Sing Praises” and “Melodies from Heaven.” The mantras and rich harmonies of songs like those hold me in ways that words from a pulpit never could. The power of gospel won’t ever be lost on me.

Kanye West has honored the genre’s influence and weaved musical elements of the black church into his catalog since the early aughts of his career. Gospel’s robust and inspirational sounds have been the grounding force for several of his most memorable tracks. There’s the College Dropout rendition of Albert E. Brumley’s “I’ll Fly Away,” the award-winning “Jesus Walks,” and the entire The Life of Pablo album that stands as the most successful and rounded effort to fuse his spiritual reckoning into his work. Kirk Franklin appears on the project along with vocals from Kelly Price and archival bits of Aretha Franklin. The album’s biggest single, “Father Stretch My Hands Pt.1” is propelled by the sample of Chicago native Pastor L. Barrett’s track on his 1976 album Do Not Pass Me By. TLOP was a continuation of Kanye’s defining ability to integrate archival music into the canvas of his original work. It wasn’t as polished as other releases, but it was earnest and felt like an arrival at a more grounded Kanye in the midst of his bouts with self-expression and mental health.

But almost three years after the release of The Life of Pablo, in January 2019, Kanye made a pivot and began to host Sunday Service jam sessions at his Calabasas home. Each week, family, friends, music executives, and influencers would come out to the invite-only event to see Kanye and his color-coordinated choir and band perform gospel classics and covers. Although Kanye’s discography shows his religious sensibilities, the very public and over-sensationalized event reads more as a pander to the black community through a distinctly black experience. He’d been on thin ice after he raved about his support of President Trump, said that slavery was a “choice” and sported a MAGA hat to further prove his point. As polarizing as Kanye has always been, these antics were the last straw. Most of his black fans felt like they had no choice but to walk away from him.

When the services started to pop up at mainstream events, it seemed like an exploitative ploy for acceptance. At this year’s Coachella, Kanye opted out of the headlining performance and brought his crusade to the desert for a timely, Easter Sunday service. In muted mauves and taupes, Kanye and his ensemble gathered on a holy hill as a sea of lily-white super fans swarmed for the performance. The optics were jarring as hypebeasts looked to the rapper as if he was the leader of the flock. This felt far from the spirit and closer to a cult led by clout. The merch stands sold $50 pairs of rustic cotton socks that were embroidered with the words “Holy Spirit.” T-shirts and crewnecks with similar designs and simple lettering sold for up to $225.

Surely, capitalism and religion are not always mutually exclusive and with the constant rise of megachurches, there is a clear commercial aspect to the evangelist industry. Perhaps one of the most unsettling distinctions is that Kanye is profiting and attempting to popularize a sound that has long existed and already speaks for itself. His covers of popular R&B songs flipped with gospel lyrics are not actually innovative at all. When I think about the ways the choir would fill the sanctuaries I grew up in, regardless of my qualms with Christianity, my home church choir’s vocal arrangements, the band’s drum kicks, and heart-bending song solos didn’t feel contrived or packaged for palatable consumption like Kanye’s do.

His supposedly upcoming album Jesus is King seems to have a tracklist of pious songs, but in this continuation of himself, it’s still unclear what it is that he truly wants to impart to the masses.

The spectrum of black music is a continuum, and we’ve seen what sort of magic is possible when genre lines are blurred (“Ultralight Beam” and “Pt 2"). Now, his intentions are questionable. As flawed as the institution of the church may be, it still remains a sacred place to many and it’s a fixture within the black community that functions as more than just a place to read scriptures. If it is a way to spread and reactivate love, then Kanye shouldn’t be the focus. In this pursuit, he’s decentralizing the music and positioning himself as the spectacle. It’s a God-complex that Kanye’s flexed in the past in both understandable and unfounded ways.

The Sunday Services feel like a more underhanded attempt to sell us this idea, just not as directly as his “I am a God” lyrics on Yeezus. During this run, he has held free performances in efforts to bring healing, specifically his show dedicated to honoring the victims of the Dayton Ohio shooting. Despite these likely well-intentioned gestures, Kanye’s ego eventually finds its way back to the forefront. In a viral video from a free service in Chicago, He’s seen walking towards the stage through a large crowd as he signals to his security to let him walk alone. “Watch this, this is my city,” he says, and then moves through the audience imitating Moses when he parted the red sea.

His supposedly upcoming album Jesus is King seems to have a tracklist of pious songs, but in this continuation of himself, it’s still unclear what it is that he truly wants to impart to the masses. Just days ahead of its initial release date, as expected, it’s been pushed back and reports show that Kanye has instead trademarked the name of another unfinished album “Yandhi.” It’s not so much that he’s reneged on the rollout, as he and other artists have changed their minds about projects before. But the delay feels linked to the larger confusion around his purpose and intentions. Kanye’s heralding himself as an anointed messenger but the element of spectacle moves him farther away from the root. It’s unclear if this new awakening is about the music, the people, or even his own beliefs.